Bouncing neon off a surface allows collection of specific isotope 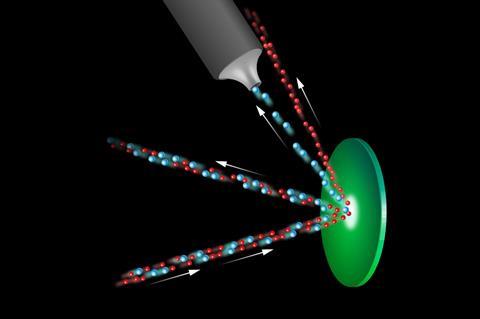 Isotopic enrichment may be commonly associated with nuclear weapons in the popular imagination, but in reality separating isotopes is vital to everything from nuclear medicine to isotopic labelling in research chemistry. Isotopes are separated by a variety of means, but they are often energy intensive or specific to one element – and usually need to be repeated several times to achieve the required isotopic purity. Now, US researchers claim an alternative solution could be more generally applicable to the light elements. Other researchers are sceptical, however.

Atomic and molecular beams are invaluable for studying surfaces. Quantum mechanics dictates that atoms are waves as well as particles, and these waves – which have sub-nanometre wavelengths – diffract off the regularly-spaced atoms on a surface like light waves off a diffraction grating. An atom’s wavelength depends on its momentum. If different isotopes of the same element travel at the same speed, therefore, their different masses give them different momenta and therefore different wavelengths. When they diffract off a surface, therefore, the peaks in their diffraction spectra should be at slightly different points.

Steven Sibener of the University of Chicago and colleagues produced a cooled beam of supersonic neon atoms travelling at almost the same speed by expanding high pressure neon gas through a nozzle into high vacuum. They directed the beam at a high quality silicon crystal, measuring the proportions of each isotope at each diffraction angle using a mass spectrometer. Neon naturally comprises less than 10% neon-22: the researchers showed that, by choosing the right angle, they could obtain samples that comprised over 30% neon-22. The researchers suggest that refinements could improve this percentage, or that samples could undergo the process multiple times to increase the proportion of the desired isotope.

They acknowledge that the technique is unlikely to be useful for separating isotopes of atoms with a mass number greater than 40, as these are more likely to scatter inelastically from a surface rather than diffracting cleanly, but Sibener suggests it could still be useful for other elements. Isotopically pure silicon, for example, has potential uses in both classical and quantum electronics. ‘Silicon’s an obvious target,’ he says. ‘But there’s also medical isotopes – several isotopes of carbon are of interest. Lithium is also very interesting as it’s used in several energy systems, including maybe fusion.’

‘The experiment, as far as it goes, is absolutely fine,’ says Mark Raizen of the University of Texas at Austin, US. ‘I’m not aware that anyone’s seen diffraction of neon before.’ He is sceptical that it could be used to separate isotopes, however. He notes that 99.9% pure neon-22 can be obtained relatively cheaply from scientific equipment suppliers, and doubts the method could produce significant quantities anyway. He believes the technique is unlikely to generalise to other elements because of the difficulties of producing a high quality beam and a suitably inert surface. ’Most elements are not gas phase at room temperature,’ he explains. ‘If they hit a surface, they stick.’

‘It’s certainly not a broadly applicable isotope separation scheme,’ agrees Scott Anderson of the University of Utah, US. ‘I can imagine it might work for things like light metals… If you had something like a fluorinated methyl surface, that might be inert enough that these things wouldn’t stick, but I just don’t know. It may be that it’s a one-trick pony, but that’s true for most isotope separation schemes.’