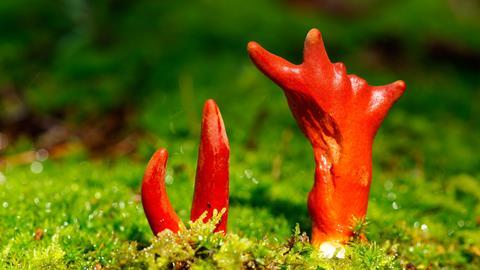 No mushroom for error

Will you enjoy a delicious treat, or endure an excruciating poisoning?

Springtime is a prime time for mushroom foraging. Depending on a mushroom hunter’s location, a variety of species might be found to delight the palate – chicken of the woods (Laetiporus sulphureus), black morel (Morchella elata), and St George’s mushrooms (Calocybe gambosa), just to name a few. While mushroom hunters are on the lookout for these and other edible fungi, they must be vigilant. Of the thousands of mushroom species known, approximately 100 are toxic, with about 30 of these containing fatal toxins.1

Due to the toxicity of various species of Amanita mushrooms, non-experts are advised to avoid the entire genus. The deadliest of this genus’ species have names like destroying angel (Amanita virosa) and death cap (Amanita phalloides), and have played roles in real-life and fictional fatalities – accidental and intentional. Both fungi are listed as two of the world’s seven most poisonous mushrooms; indeed, the death cap ‘accounts for more than 90 percent of mushroom-related poisonings and fatalities worldwide’.

Amanita poisoning can inflict incredible pain. The symptoms of death cap poisonings have been described as ‘some of the worst’. There are a range of awful gastrointestinal symptoms attributed to phallotoxins in the mushrooms, with amatoxins responsible for liver and kidney failure. Speedy help dramatically improves one’s chances of survival, but a two or three day wait for medical treatment sees a 90% mortality rate.

An excruciating end and no antidotes, all innocently disguised in a foodstuff we enthusiastically add to soups, salads, pastas and pizzas? It is no wonder Amanita mushrooms have featured in fictional intentional poisonings. Destroying angel was a weapon of choice in a Midsomer Murders episode of the same name. Dorothy Sayers, famed author from the golden age of detective fiction, cast Amanita muscaria (fly agaric) in a starring role in The Documents in the Case, co-authored with physician Eustace Robert Barton.

Move to Asia – specifically South Korea, Japan, China and Java – and another fiendish fungus comes into focus. One that bears a striking resemblance to marine pillar coral, but bright red: Podostroma cornu-damae, commonly known as poison fire coral. Though rare, poison fire coral is the culprit behind multiple poisonings in South Korea and Japan.1-5 One of the highest profile cases involving poison fire coral occurred in Japan’s Niigata prefecture in 1999 when a party of five drank sake mistakenly infused with the deadly fungus, landing all of them in hospital. Within two days, one of them died. Almost 20 years later, another mushroom liquor case saw the imbiber dead 12 hours after ingestion.1

For two different married couples, in 2012 and 2016, it was mushroom tea that landed them in hospital. In the 2012 case, one spouse died due to multi-organ failure, despite an aggressive treatment strategy including prophylactic antibiotics, platelet transfusion and the use of granulocyte colony-stimulating factor (G-CSF). Important in oncology, G-CSF is used to boost the production of white blood cells called neutrophils, which are knocked down to severely low numbers by chemotherapy.

New trichothecenes, along with the relatively rarity of Podostroma cornu-damae, means reference materials or standards for testing could be extremely limited or non-existent. This analytical hurdle was recently cleared by Sanggil Choe and colleagues at South Korea’s National Forensic Service.1

The research team showed that liquid chromatography quadrupole time-of-flight mass spectrometry (LC–QTOF–MS/MS) paired with chemical component analysis could identify trichothecene culprits in the previously mentioned case of a man drinking poison fire coral infused liquor.1 As in the other Podostroma cornu-damae poisonings and the vast majority of Amanita poisonings, it was a case of mistaken identity rather than some malicious bait-and-switch. Poison fire coral has often been mistaken for Cordyceps sobolifera, a fungus considered a health food across Asia, as well as two other edible mushrooms – Ganoderma lucidum and Cordyceps militaris.

Part of what makes the most toxic mushrooms dangerous are their fungal doppelgängers. To avoid a fatal fungi fate, follow the truly global advice of ‘don’t eat a mushroom unless you’re certain it’s an edible species’. Seek a mycologist’s input and give the questionable mushroom a miss this spring and all year ‘round.