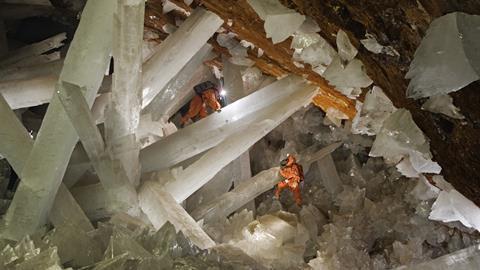 The challenge to protect the Naica mine Cave of Crystals

To see or not to see? That, for delicate historical and artistic artifacts, is the question. Paintings, tapestries and other works of art must often be displayed in dim lighting within protective casing to avoid degradation of the pigments and other materials. For art conservators, the painful truth is that the best way to preserve priceless and irreplaceable objects would be to not display them at all.

At the Lascaux cave in southwest France, with its famous and astonishing 17,000-year old wall art, keeping things off display has been more or less the solution since the 1960s. Light, air and the breath of sightseers had previously led to the appearance of lichens, moulds and crystal precipitation on the cave walls, and the authorities decided that access to the original caves had to be highly restricted. Visitors today are directed to a painstaking replica of the cave.

There might be a similar argument to be made for the Naica mine, in the state of Chihuahua in Mexico. They house one of nature’s most spectacular ‘works of art’: enormous crystals of the mineral gypsum (hydrated calcium sulfate), precipitated from hydrothermal fluids over a period of thousands of years. The caves are part of a lead and silver mine that has operated since the early nineteenth century; the first ones that contain these giant crystals were discovered during mining excavations in 1910. They have drawn small, select groups of visitors ever since, but a new study warns that exposure to atmospheric conditions could be leading to alteration and dissolution of the mineral surfaces.1

In 1927, American geologist William Foshag of the US National Museum managed to get access to the Naica caves and described what he found in American Mineralogist: ‘The gypsum crystals have grown to an enormous size. Many of them are four and five feet long and a few probably reach six feet. They grow from the floor of the cave in a manner resembling the maguey plants so common on many of the hills of Mexico. These large crystals are colored a light gray by included mud but are often capped by a clear white termination.’

Even those impressive sights in the so-called Cave of Swords pale, however, in comparison to what literally came to light in 2000 when the Cave of Crystals was discovered. Here the immense prismatic columns of gypsum (in the form called selenite) bisect the space in near-transparent pillars up to 11m long and about 1m wide: by far the largest gypsum crystals known anywhere. Their lustre in the illuminated cave has been compared to moonlight.

These beautiful, surreal crystals formed originally by precipitation from hot, supersaturated salt-laden fluid inside the caves,2 and they are rather vulnerable once deprived of the buoyancy of the solution – a situation only sustained by the pumping operations of the mines. There are probably more caves within the tangled fault networks of the Naica system, perhaps with even bigger crystals.

Visitors are permitted to view these caves only in small groups, with permission and supervision of the mine management. Some are allowed only to look in through a window at the cave entrance; the Cave of Crystals has a temperature of around 50°C, so it’s dangerous to remain inside for more than about 10 minutes. María Montero-Cabrera and coworkers of the Centre for Study of Advanced Materials in Chihuahua have carried out lab tests of the effect of exposure to atmospheric gases on a large (40kg) selenite crystal taken from the Cave of Crystals. They looked at what gases such as carbon and nitrogen oxides and methane, which are commonly released during mining, might do to the material.

Despite the high humidity of the environment, the researchers found that the gypsum surface can lose hydration water, being converted to the less hydrated calcium sulfate mineral bassanite, particularly in atmospheres of air and carbon dioxide. Worse, these conditions can produce actual dissolution and weakening, leading to cracking. In short, the giant crystals are currently at risk.

What can be done? One answer would be to return the cave to its original state, flooding it with hydrothermal fluid – but that would of course make human access impossible. Another option is to keep the current entrance closed and redesign another, more suitable one for a few closely monitored visitors. But the researchers also propose a Lascaux-like solution, creating a separate visitor centre that describes the caves and perhaps even offers a simulacrum of them, while placing the real thing out of bounds. Montero-Cabrera says there are rumours that the giant gypsum crystals in a cave in Pulpí, Spain, might be recreated in a holographic exhibition. Virtual-reality tours are another option. Ultimately it would depend on the resources that state or national authorities chose to make available.

Let’s hope an answer is found. It would be sad not to be able to experience the Cave of Crystals somehow, but sadder still if it were allowed to deteriorate irreparably.