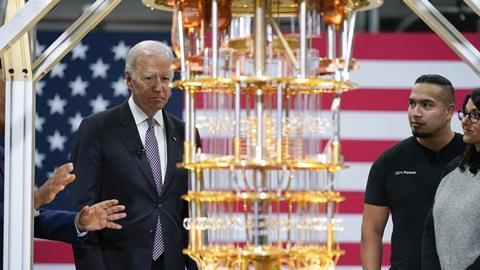 Quantum computing has its limits

In a talk at the Massachusetts Institute of Technology in 1981, Richard Feynman spoke about ‘simulating physics with computers’. This was already being done at the time, but Feynman said he wanted to talk ‘about the possibility that there is to be an exact simulation, that the computer will do exactly the same as nature.’ But as nature is quantum-mechanical, he pointed out, what you need for that is a quantum computer.

The rest is history – but history still in the making. When I recently asked David Deutsch, the visionary physicist who in 1985 laid out what quantum computing might look like, whether he was surprised at how quickly the idea became a practical technology, he replied with characteristic terseness: ‘It hasn’t.’ You can see his point. Sure, in October President Joe Biden visited IBM’s new quantum data centre in Poughkeepsie, New York, to see an entire room filled with the company’s quantum computers. And on 9 November IBM announced its 433-quantum-bit (qubit) Osprey processor, although it seems only yesterday that we were getting excited at Google’s 53-qubit Sycamore chip – with which the Google team claimed in 2016 to demonstrate ‘quantum supremacy’, meaning that it could perform a calculation in a few days that would take the best classical computer many millennia.1 This claim has since been disputed.

Deutsch’s reluctance to accept that practical quantum computing has arrived presumably stems from the question of whether it can do anything truly useful yet. Sure, one can construct a problem that is very hard for a classical device but ideally suited to a quantum computer and then demonstrate that only a few dozen qubits may be enough to achieve ‘supremacy’. But how helpful is that in the proverbial real world? When Feynman described the idea of quantum computing, he had it in mind that such a facility would be used to simulate systems governed by quantum laws, such as molecules and materials. Instead of using cumbersome classical approximations such as the standard ab initio methods of quantum chemistry, one would represent the quantum states of atoms and molecules in their own terms to calculate properties such as energy spectra, electronic band structures and stabilities.

Quantum computers have been doing that for several years now – after a fashion. Alán Aspuru-Guzik, then at the University of California at Berkeley, and his colleagues showed back in 2005 that it should be possible to simulate simple molecules such as water and lithium hydride with just a few qubits.2 And in 2017 an IBM team used a mere six-qubit circuit to simulate LiH and BeH2 – the latter being the first triatomic species to be simulated this way.3 The results were so-so, but they established the feasibility of doing quantum chemistry the quantum way.

Given how the available resources have grown in just the past few years, one might expect we can do a lot more now. But a new study by Garnet Chan of the California Institute of Technology and his coworkers puts that – and Deutsch’s comment – into perspective.4 They have used a 53-qubit chip related to Google’s Sycamore to simulate a molecule and material of real interest. They chose their test cases without any attempt to identify problems well suited to a quantum approach. One was the eight-atom cluster of iron and sulfur in the catalytic core of the nitrogenase enzyme, which fixes atmospheric nitrogen into biologically usable forms. Understanding that process could be valuable for developing artificial nitrogen-fixing catalysts. The other was the crystalline material alpha ruthenium trichloride, a compound of great interest in the field of quantum materials because it is thought to display the exotic low-temperature phase called a spin liquid.5

How did the chip perform? Frankly, rather indifferently. Chan admits he initially thought that with 53 qubits at their disposal, they would be able to simulate these systems with aplomb. But getting to grips with the problem disabused him of that idea. By mapping them onto the quantum circuit, the researchers could make a reasonable stab at calculating, say, the energy spectra of the FeS cluster and the heat capacity of α-RuCl3 – but nothing that classical methods couldn’t do at least equally well. One of the key problems is noise: current qubits are error-prone, and there are not yet ways of correcting such quantum errors. So if the calculation has too many logical steps, the noise overwhelms the result, producing gibberish. For such reasons, the team was able to exploit only a fraction – about a fifth – of the resources the processor offered.

It’s a sobering reminder of where we currently stand. Sure, things will continue to improve – but you won’t be throwing away your old quantum-chemical algorithms just yet.