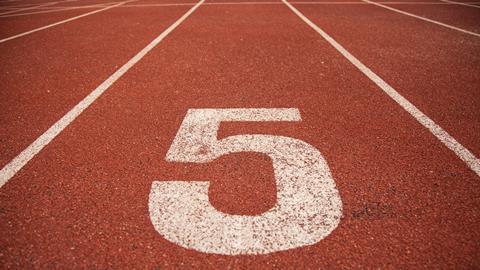 Ruling out the rule of five

If you were doing medicinal chemistry after about the year 2000, you definitely got to hear about the ‘rule of five’. Sometimes it was known as the ‘Pfizer rule of five’ or ‘Lipinski’s rule of five’, for the understandable reason that its originator, Chris Lipinski, worked at Pfizer. But it wasn’t just one rule, it was several – and taken together, many people thought that they might tell you how to make drugs that had a better chance of success in clinical trials.

Drug discovery needs all the help it can get in that department, so it’s no wonder that these ideas got some attention. Failure rates in the clinic are famously around 90%. So what were these rules that offered a way out? Your structure was supposed to have no more than five parts of its structure that were hydrogen bond donors (and no more than 10 that were hydrogen bond acceptors), a molecular weight of no more than 500, and a logP (a measure of a compound’s balance between greasiness and water solubility) of no more than 5. And that was it.

The short and easy-to-remember nature of the recommendations surely did a lot for their popularity. They were, in fact, so short and easy to grasp that upper management latched on to them, and there the trouble began. For a while (at least in some organisations) you could be asking for real trouble if you kept violating one or more of the rules. The software used to register newly synthesised candidates for testing might flash an alert at you if it detected such an excursion, or you might get a personal message from a higher-up asking you to pay more attention to your compound properties. The implication was that no good medicinal chemist could fail to take heed.

So where did the rules come from? Lipinski had assembled a set of known drugs and looked to see what they had in common. The bulk of them had properties that fell within the boundaries of the suggested rules, so the belief was that new compounds would stand a better chance if they landed in the same ‘property space’ as well. Moving too far out of that region, it was thought, was asking for difficulties in solubility, membrane permeability, stability to metabolising enzymes and more. It’s not an unreasonable thing to suggest, and it fits in with the experiences of many working chemists. Nor is it Lipinski’s fault that some managers (and some whole departments) took the idea too far. But the whole thing did get out of control. There are, in fact, plenty of excellent drugs that violate some of the rules, and antibiotics in particular often trample all over them. It was hard to ignore the number of valuable compounds that never would have been developed at all under a doctrinaire rule-of-five approach. What’s more, it didn’t seem as if that many more compounds were actually making it through the clinic in the new era, either.

There is no substitute for real data

Now, over 20 years later, it’s understood that sure, compound properties matter. But it’s impossible to draw uncrossable lines with them, either (which was a point that Lipinski himself tried to make as time went on). Compounds with high molecular weights or other rule violations can indeed have their problems, but useful compounds can’t be and shouldn’t be discarded without getting a fair experimental hearing. In the end, the numbers speak – and actually, they always have. Sometimes reasonable-looking compounds just don’t work out, and sometimes odd-looking ones turn out to be winners. You should keep the percentages in mind, but there is no substitute for real data.

That turned out to be the lesson from the entire Rule of Five era. We can’t scroll down lists of drug candidates and pick out the good ones on the basis of a few simple calculations, as appealing (and lucrative) as that idea might be for both the bench chemists and for those in charge of their departments. No, we have to do the work, take the time, run the experiments, and all that means that we have to spend the money, too. Just as we have always had to. Once again, we have learned the unpleasant lesson that there are no shortcuts.