The perception that young scientists need to sacrifice family life for a career in research must change, says Mark Peplow 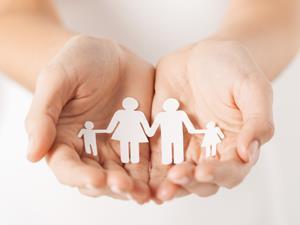 Embarking on an independent research career can be a daunting challenge, albeit one that is also rich with excitement and opportunity. But throw kids into the mix and that challenge can appear insurmountable. Small wonder, then, that many young scientists leave academia because they believe it is simply too difficult to combine a successful research career with family life.

A valuable new project now aims to counter that perception. Parent carer scientist,1 launched by the Royal Society in early March, will highlight 150 personal stories from scientists that illustrate how they juggle their roles as parents or carers with their work. The first 40 stories are already available, and demonstrate that whatever family life throws at you – divorce, bereavement, the birth of triplets – it is still perfectly possible to have a thriving career in research. ‘The perception is not the same as the reality,’ says Ottoline Leyser, a plant biologist and director of the Sainsbury Laboratory in Cambridge, UK, who leads the project. ‘You get all these negative messages, and they’re not true.’

Overcoming the idea that family must be sacrificed on the altar of science is not just an important way to improve the retention rates of women in science. It is vital to the health of science itself.

People are, of course, often expected to make personal compromises to pursue their professional goals. That does not mean science should be like a monastic order, conducted to the exclusion of a rich personal life. Yet this narrative is still prevalent in academia and causes a number of problems that are detrimental to science.

In 2013, the Wellcome Trust published a report that detailed the major hurdles faced by young scientists as they entered their postdoc years.2 These included a growing pressure to quickly rack up publications in high impact journals; greater competition for funding; a long-hours culture that was not conducive to family life; and short-term contracts that make it hard to settle down.

While both men and women face these obstacles, they seem to disproportionately affect women. This is the key problem with the so-called ‘leaky pipeline’: not that scientists leave academia to fan out into a variety of different careers, but that the leak is so drastically gendered. As a result, academia risks losing talented people because of their desire for a family life.

These issues are not only bad for diversity. As the Nuffield Council on Bioethics noted in 2014,3 many of the factors that push women out of academia are also bad for science, because they act as a disincentive to multidisciplinary or collaborative research, and emphasise research output over equally valuable work such as teaching and mentoring.

There is ample evidence that these problems affect chemistry at least as much as other sciences. In 2008, a Royal Society of Chemistry report described how women could be deterred from pursuing postdocs by an adversarial, ‘macho’ culture that expected scientists to spend very long hours in the lab.4 All too often, women were told bluntly that to make a genuine commitment to research they would have to put family on the back burner. And look at the results: although half of the UK’s chemistry undergraduates are female, more than 90% of its chemistry professors are male.

A highly competitive environment can certainly drive individuals toward excellence. But competitiveness can also be detrimental if it is entirely focused on simply beating everyone else, rather than pushing forward the boundaries of knowledge. It’s also an unattractive environment that puts off many people, both male and female, from entering science in the first place, as outlined by the Women into Science and Engineering (WISE) campaign.

It’s probably not the most efficient way to do science, either. Read James Watson’s The double helix, his account of the discovery of the structure of DNA, and it becomes abundantly clear that if the various actors had collaborated sooner, they could have determined the true structure of DNA much earlier.

One of the most striking aspects of the Royal Society’s campaign – which features stories from both men and women, married and single, including those with same sex partners – is that it contains an unusual amount of personal detail about these scientists’ lives.

In public, scientists are often stripped of any glimmer of humanity. They are portrayed as cold, rational, robot boffins. This an unwelcoming image that sets science apart from society, and seems to undermine one of science’s great strengths: that it is carried out by humans. Yes, we make mistakes – but we are also capable of joyful leaps of imagination that can lead us to astonishing insights about the universe. Initiatives like the Royal Society’s cannot singlehandedly improve the retention rates of women in science, but portraying science as an activity carried out by human beings can certainly help to change the mood music – not only for women, but for science as a whole.

3 The culture of scientific research in the UK, Nuffield Council on Bioethics, 2014

4 The chemistry PhD: the impact on women’s retention, Royal Society of Chemistry, 2008