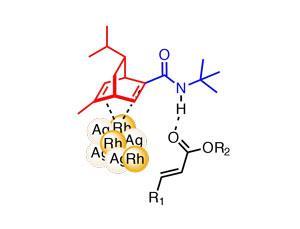 Figure 1 â€“ The chiral diene ligand binds and activates the nanoparticles, while the amide co-ordinates the substrate

Heterogeneous metal catalysis to control carbon–carbon bond construction is becoming increasingly prominent. However, the complexity of heterogeneous systems has limited development of asymmetric methods. There are numerous challenges to developing reactions that exploit chiral surfaces, or employ molecular modifiers (ligands) to create a chiral surface environment and control the stereoselectivity of a transformation.

The typically non-uniform nature of metal surfaces is just the tip of the iceberg, especially as different surface topologies often result in distinct reactivity. The complexity of heterogeneous catalytic systems is often unfathomable, which – combined with the lack of readily available analytical techniques to analyse reactions on surfaces – makes designing chiral catalytic systems rationally very difficult. The waters are further muddied when unselective background reactions proceed at sites where the surface modifications are missing.

One strategy to address these difficulties is to employ a ligand that not only creates a chiral environment at the surface, but is also essential to activate the metal, the substrate or both. This ensures that reactions only proceed in a chiral environment. Despite this principle being first established in 1979, when a Japanese group used cinchona alkaloids and a heterogeneous platinum catalyst to selectively hydrogenate ketones,1 further development of this approach has been limited.

Now, Shu Kobayashi and his group from the University of Tokyo, Japan, have started making major progress in this area, reporting an impressively efficient heterogeneous rhodium–silver bimetallic nanoparticle system.2,3 The particle surface is modified with a bifunctional ligand bearing two ‘active sites’ (figure 1) – a chiral diene that activates the metal and creates an asymmetric environment, and an acidic secondary amide that acts as a hydrogen-bond donor to coordinate and activate the substrate close to the metal surface. They demonstrate asymmetric addition of arylboronic acids to substituted acrylates in yields generally well above 80%, and with enantiomeric excesses typically above 98% (figures 2 and 3). Although reactions still proceed well using the same ligand with a homogeneous rhodium catalyst, the heterogeneous system is typically more effective both in terms of yield and selectivity. The low catalyst loadings of only 0.25mol% of the Rh–Ag nanoparticles and 0.05mol% of the ligand are also highly favourable compared to relevant homogeneous systems.

Despite the increasing need for industrially scalable asymmetric catalytic methods, homogeneous catalytic methods have limited application beyond hydrogenation. In part, this is because isolating the expensive metals and ligands from a reaction mixture in a reusable form is usually not feasible; a problem further compounded when the metal is toxic! Here, heterogeneous catalysts have a distinct advantage, as it is often possible to filter off the catalyst, wash it and reuse it. Kobayashi and his team show this is possible with their catalytic nanoparticles, reusing them six times on gram scale reactions without erosion of yield or selectivity.

Identifying the true mechanism of a heterogeneous reaction with any certainty is somewhat akin to attempting to design a successful drug molecule from scratch on paper – impossible. However, the team has made some progress. Comparative studies with homogeneous systems indicate a different profile in terms of reaction kinetics and non-linear effects, suggesting a distinct active species in each system. A ‘hot filtration test’ indicates that the active catalyst is removed by filtration – a sign of true heterogeneity – and analysis of the filtrate shows no leached metal species. In language typical in the field of heterogeneous catalysis, the researchers state that these facts ‘might exclude the possibility of leached homogeneous metal mediating the reaction’. While this may seem non-committal, it represents the complexity and challenges of developing and understanding asymmetric heterogeneous catalytic systems. The complexities of this work are difficult to address in short, but the development of a reusable heterogeneous catalyst that outperforms comparable homogenous systems is something that should not be readily overlooked.