Still boiling after all these years

If you’ve got the facilities, distillation can be a powerful plant technique

‘There’s no better feeling than loading product with a shovel.’ That’s a sentiment often expressed about the joy of large-scale chemistry. Having felt pride at off-white crystalline product leaving the dryer room in drums, I can agree. But liquid products should not be discounted! They don’t require drying, they are easy to transfer from reactor to reactor and there’s no pesky melting point determination.

If they require distillation, however, that can get difficult. Petroleum refineries with their towering distillation columns (large enough to go climbing inside) are purpose-built for distillation, but that’s not something a typical chemical plant has access to. 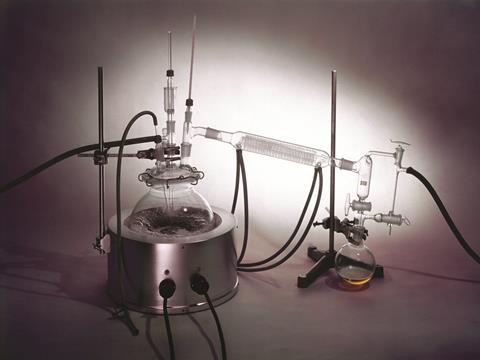 While distillation in the lab can be irritating to set up, at least it doesn’t require a construction team and a forklift

But I have to start with a confession: I detest vacuum distillation on laboratory scale, especially for volumes below 100ml. Crammed in a tiny space, you have to set up a stirrer plate, round bottomed flask, heating mantle, stirrer bar, short-path distillation head, water hoses to cool the condenser, and the vacuum hose, which is usually floppy and either too short or too long. Chances are, you’re going to have to change the oil on the pump, which you’ll have to drag over on a rickety old cart.

Apart from the (rather painful) setup, vacuum distillation itself is simple. After the vacuum pump is started, you slowly heat the flask and collect your distilled product when it starts to come over. If you’re collecting multiple fractions, you may have a ‘cow’ or ‘pig’ receiver that allows you to change flasks without breaking vacuum.

Things are a bit different in the plant. If you have a reactor that’s set up with a condenser that can handle vacuum pressure, you’ll be ready to go. If not, that is an undertaking of its own. Changing reactor configuration requires serious planning and mountains of paperwork. Condensers in the plant aren’t fragile pieces of glass. They easily weigh over 100kg of thick metal, sometimes much more. You’ll need a number of construction workers, a special forklift, and a couple of shifts’ worth of time to install a condenser – provided there’s room above the reactor. The condenser will need to be plumbed into the coolant system, and attached to the reactor. That’s a job for heavy steel bolts, not just a red Keck clip and a touch of grease.

Rather than a shoebox-sized vacuum pump on a cart by your feet, industrial pumps look like they might power a tractor. There always seems to be more troubleshooting in the plant, as well. You’ll need a gauge to monitor the vacuum (and to search out the ubiquitous leaks preventing you from reaching the necessary pressure).

One distillation not fondly remembered started with what seemed to be the simplest reaction in the world: forming a ketal from a simple diol, a ketone and a touch of acid. It worked well in the lab, and proceeded a little slower in the pilot plant. When we transferred it to 4000 litre scale, the reaction proceeded very slowly indeed. We started to think about different ways to separate the liquid starting ketone and product ketal. We tried vacuum distillation to remove the solvent and the remaining starting material, but we just couldn’t get good separation.

We decided to try one more technique: thin-film vacuum distillation. This is a unique piece of equipment that uses a high speed rotor within a horizontal heated tube to generate a thin film of the mixture on the walls of the tube. As the mixture is fed in the top, the lower boiling starting material should quickly vaporise and be mechanically pushed away, while the higher boiling material falls down to the bottom and be collected. Happily, multiple passes of our material through the apparatus provided sufficiently pure material for the next step of the process.

After that debacle (and facing further customer orders), we had a sense that this distillation simply would not be profitable, and our team went back to the laboratory and the literature. We changed the process to use a reagent that drove the reaction to completion and consumed all the starting material. Sometimes, the best vacuum distillation is the one that isn’t needed.