The crystal ball that can tell lies

X-ray structures are not necessarily definitive, says Derek Lowe, especially when it comes to biomolecules 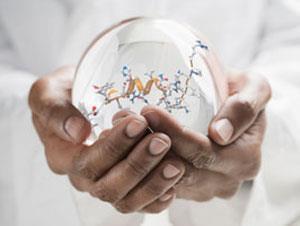 How, as organic chemists, do we really know what the structures of our molecules are? That’s been a big part of the field’s development for at least the last 150 years, and there’s no shortage of ways to answer the question. Total synthesis (and its oft-forgotten twin, degradation analysis) can make a compelling case, albeit after a good deal of work. Modern NMR methods are extraordinarily powerful, and don’t destroy any compound. Many would say, though, that the most definitive answers come from x-ray diffraction. I well recall the comments of a professor of mine when he had a new crystal structure: ‘Now if someone asks me how I know I have the compound, all I have to do is show this slide, and everyone will just have to sit down!’

And that’s often how it works. A high-quality x-ray structure really is hard to beat when it comes to atom-level connectivity. But it’s not always that simple. Single-crystal small molecule structures can often reach atomic resolution, but large biomolecules are something else again. And when you’re trying to understand ligand binding inside those biomolecules, there’s a lot more room for judgment calls than many chemists realise.

Novice practitioners need to beware of the Silicon Oracle effect, where results attain greater force by having arrived via computation

What you get out of an x-ray determination is a map of electron density. Most of the time, what you get out of that, in a ligand binding experiment, is a blob. Or several blobs. The crystallographer’s job is to figure out what sorts of small molecule structures or conformations make the most reasonable fit to those funny-looking electron clouds. There are many techniques available to do this, but they all involve some modelling and some approximation. It can be relatively easy to rule certain structures out, but more difficult to distinguish between several others of equal plausibility.

The advent over the years of software packages to do this sort of work has meant that many people have tried their hands at it. This is a good thing, but no blessing comes unmixed. As with any modelling effort, novice practitioners (and untrained spectators) need to beware of the Silicon Oracle effect, where a result attains greater force by having arrived via computation and in the form of some nice-looking graphics. A big problem is that those graphics can be made so attractive that, without a look behind the curtain, they resemble perfectly the results obtained from much firmer (or better-handled) data.

A look through the Protein Data Bank (PDB) can illustrate this rather painfully. Experienced PDB hands can lead you to ligand structures that are ferociously implausible. Boat-conformer cyclohexanes are the least of it; there are heteroaromatic rings in there that have apparently been melted like Dalí clocks, making otherworldly right-angle bends.

Many other errors occur in the structures of the proteins themselves. Side chains twist off in odd directions and backbones loop strangely. But if you’re not well-versed in protein structure, you may not even notice. Proteins adopt all sorts of conformations, anyway, and it is a crystal structure after all. It takes experience in what some call ‘forensic crystallography’ to straighten these things out, and these folks are not willing to completely trust any given PDB structure until they’ve run a comb through it first. After seeing an adenine that looks like it’s been slammed in a car door or a lysine drooping like a broken tree branch, you can understand their caution.

This is, on one level, just the usual way that science works. There are mistakes everywhere, and they’re supposed to be gradually corrected as others try to use the data. But x-ray crystallography has long had a sort of halo around it as the ‘ground truth’ of molecular structure, so many chemists are surprised to learn how rife with error it can be.

There’s a larger issue as well. Even if all the structures in the PDB were correct, they would still be static structures of proteins (and ligands) that are far from immobile in the real world. Chemists need to remind themselves of this constantly. As the verse has it, we see as through a glass, darkly – even with x-ray vision.