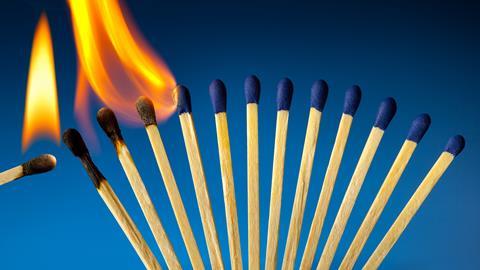 The mud pools and vapours of the Solfatara di Pozzuoli volcano crater have attracted tourists for thousands of years. Located near Naples, Italy, the crater has been dormant for more than eight centuries but, as one family of three tragically discovered in September 2017, it still contains hidden dangers. The incident began when the child fell into a pothole and lost consciousness. Focused on rescuing their child, the two parents quickly descended the 2.5-metre hole, only to find themselves quickly overcome by fumes. A fellow tourist followed, but stopped their descent just in time – they knew the smell in the hole signalled imminent peril. Instead, they rushed for help. By the time it came, the family members were dead. 1 It was the latest in a perilous domino effect that has been seen around the world.

The domino effect is a type of poisoning case seen in confined spaces. One person is knocked down, another goes to help and is the next to fall, a third intervenes… a disastrous chain reaction. Typically, the domino effect is an occupational hazard, such as in the case of six wastewater treatment workers that occurred three years earlier in Catania, Italy.2 One employee cleared an obstruction, only to be killed by a released toxic gas, spreading through the team as they tried ‘to help their colleagues, and died one after the other’. All six died.

The gas that poisoned the workers was the same that killed the family at Solfatara – hydrogen sulfide (H2S). The gas, with its odour of rotten eggs, is a natural product of decaying organic matter and a by-product of a variety of industrial processes, as well as part of the mix emitted in geothermal areas. Hydrogen sulfide is colourless, flammable and explosive, and its toxicity increases with concentration, so it poses a danger whether exposure is acute or chronic.

The US Occupational Safety and Health Administration (Osha) notes that the typical background concentration of H2S is between 0.00011–0.00088 parts per million (ppm), with the rotten egg smell of H2S noticeable been 0.01–1.5 ppm and ‘more offensive’ between 3­–5 ppm. Prolonged exposure near this range causes some effects of H2S – nausea, teary eyes and a headache. The effects become more serious – impacting the respiratory and central nervous systems among others – at around the 100 ppm level. With prolonged exposure at this level, death is a distinct possibility. This is also the level at which olfactory fatigue sets in – meaning that characteristic warning smell no longer registers just as the situation becomes life-threatening. ‘Knockdown’ – the near-instant collapse of exposed persons – occurs at around 1000pmm. Higher concentrations result in near-instant death. At the bottom of the hole at Solfatara, the maximum level of H2S was found to be 2200 ppm, with a ground level concentration of 350 ppm.1 But this was not the only toxic gas that played a role in the family’s death. Carbon dioxide, also emitted at volcanoes and geothermal areas, was also present at a lethal dose far exceeding its ‘knockdown’ range.

Victims of hydrogen sulfide have tell-tale signs that can be seen during autopsy, including a greenish discolouration of the skin and some internal organs. This points to the presence of sulfhemoglobin (SHb), ‘a green-pigmented protein with a sulfur atom incorporated into the heme ring’.3 However, this doesn’t necessarily indicate poisoning – H2S is found in small quantities in our blood, and often in larger quantities once a person has died and the body has begun to decay. Can we confidently distinguish ‘normal’ levels from suspicious ones? Is it poisoning, putrefaction or both?

In the case of the Solfatara crater, the answer is ‘probably’. Femoral blood H2S concentrations for the decedents in both incidents were provided in both case reports. Carfora et al. made careful note of their body storage conditions, as well as documenting that ‘no signs of early post-mortem changes or putrefaction were observed as the autopsy of bodies took place <48 hours after death’.1

In addition to being standard observations, the discussion of these details was informed in part by research conducted subsequent to the death of the six sewage workers. 4 Barbera et al. studied H2S blood concentration of lethal poisoning victims and of persons that died from traffic-related deaths, reporting their findings in the Journal of Forensic Science.4 They found ‘it is not possible to distinguish if the H2S concentrations in blood are secondary to a lethal poisoning or to a H2S putrefactive production’ and their ‘findings underline the predominant importance of circumstantial evidence, together with pathological findings … in the identification H2S fulminant poisoning’.

As is often the case, context – in addition to careful lab work – matters.