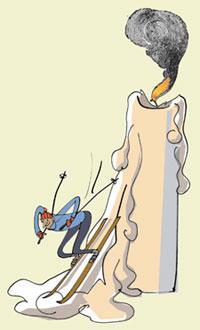 During the California Gold Rush in the Sierra mountains, miners held impromptu ski races and discovered that greasing their skis with animal and vegetable oils led to faster skiing. Later others dripped candle wax onto skis and experienced even better performance in cold conditions. It was firmly believed, however, that some snow conditions were simply ’unwaxable’.

The ski wax industry arose in the early years of the 20th century using natural waxes and an array of ingredients including old bicycle tyres. By the early 1940s the industry was put on a scientific footing by the work of chemists from AB Astra in Sweden. In 1947 this work led to the replacement of natural waxes by more consistent petroleum waxes. Later developments included the addition of surfactants and fluorinated waxes. The exact formulation of the commercial waxes on offer is secret, but in spite of the belief of many skiers, the ingredients do not include eye of newt or toe of frog. The industry is certainly no longer a few guys using their granny’s old clothes boiler in a garage: Swix, the Norwegian ski wax giant, had an annual turnover of just under ?50 million in 2008.

But why wax at all? Skis slide on a thin layer of water between the ski and the snow. However, too much water causes ’wet drag’ (suction) and too thin a layer causes ’dry drag’ (friction). At what stage these two effects come into play depends on a number of factors: whether the snow itself is new, old or - increasingly these days - artificial; moisture content; air and snow temperatures; the surface morphology of the ski and its material of construction. Although there are continuing attempts to quantify these effects, the number of variables means that it is very difficult. I suspect that field testing is the most important. In 1945, Swix carried out 6000 tests on 200 different mixtures. The company was the first to add dye to its products to colour code their working temperatures. The colder the conditions for which the wax is formulated, the colder the colour.

Does it make a difference? Even in these days of high tech specially formulated waxes, costing more than caviar per ounce, the choice of wax or no wax is very important. Readers with a good memory of the 2010 Winter Olympics may remember the poor performance of the two German classic-style skiers in the men’s 4x10km cross-country relay. They were skiing on carefully waxed skis, whereas the majority of their competitors were skiing on dry, unwaxed skis. This turned out to be the better decision, as a snowstorm during the race drastically changed the snow conditions. A ski perfectly waxed for the conditions is faster than any other, but is very temperamental. Non-waxed skis are slower but can better handle changes in snow conditions. The German team - despite heroic efforts by the two classic style skiers - came in sixth.