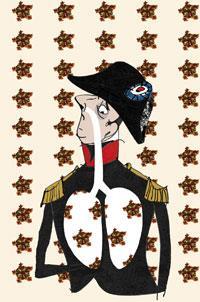 In the spring of 1980 I was preparing a series of light-hearted radio talks on science, for BBC Radio. The first talk concerned the human effects of vaporous biochemistry: smell, poisons, and so on. One of my stories was about Victorian wallpaper. Copper arsenite, Scheele’s Green, was a vivid and stable green pigment much used for domestic Victorian wallpaper. Strangely, the people who lived in such green-papered rooms sometimes seemed victims of arsenic poisoning: as if the arsenic could get off the wall and attack the people within. I vaguely remembered that Napoleon, after his defeat at the battle of Waterloo, was imprisoned by the British on the Island of St Helena. After a few years he died there. Some of his hair was kept for various family keepsakes, and modern methods of analysis had recently found arsenic in it. So just as a cheerful throwaway-line, I mentioned this in my radio talk and asked if anyone listening knew the colour of Napoleon’s wallpaper.

What followed was the most amazing piece of good fortune in my scientific life. That broadcast went out on the 25th of May 1980. Mrs Shirley Bradley of Norfolk heard it. She wrote to the BBC saying that she had an actual sample of Napoleon’s wallpaper in an old family scrapbook. In an inspired act of vandalism, some admirer of the great emperor had torn a piece of paper off the wall of Napoleon’s room, and had pasted it into that scrapbook!

I borrowed Mrs Bradley’s scrapbook, and analysed the wallpaper for arsenic. I did not want to use destructive chemical methods. I asked Ken Ledingham of Glasgow University to study my sample by non-destructive x-ray fluorescence spectroscopy. We had several problems, but ultimately reached a believable result. Napoleon’s wallpaper had 0.12 grams of arsenic per square meter. A research finding of 1893 by C R Sanger of the Washington University of St Louis, reckoned that wallpapers containing 0.6 to 0.015 grams per square meter, could be hazardous. The mechanism of that hazard was revealed shortly afterwards by the Italian biochemist, E Gosio. If the wallpaper was damp, mould grew on it; the mould released arsenic trimethyl into the air, and the inhabitants of the rooms breathed it in. Longwood House, where Napoleon was imprisoned, was notoriously damp - which was presumably why its wallpaper was so easy to detach.

Various historians have developed the theory that the British were keen to kill their distinguished prisoner. Another school of thought blames the French (who did not want him back). In fact several historical theses seem to fit the idea that there was a deliberate conspiracy to murder Napoleon. Arsenic was a likely weapon. Indeed, until the Marsh test made it very easy to detect, arsenic was a leading poison. Its discovery in surviving samples of Napoleon’s hair seemed to clinch the idea of deliberate murder. So several historians were upset by my claim that it was all an accident of decor. I and Ken produced a paper for Nature  (David Jones and Kenneth Ledingham, 14 October 1982, 299, 626); I wrote a more human account for New Scientist  (David Jones, 14 October 1982, 101).

Napoleon himself feared he was dying of stomach cancer, the disease which had killed his father; and indeed his autopsy revealed that his stomach was very damaged. It had at least one big ulcer. Of course that autopsy could have been rigged by the British to exculpate wicked poisoners. But I believe the man who should not have been there - Surgeon Henry, whose ship was passing St Helena at the time. My feeling is that Napoleon would have died in any case. His arsenical wallpaper might merely have hastened the event by a day or so. Murder conspiracy theorists will have to find new evidence!