The riddle of the ribosome

So then, another substantially ‘biological’ chemistry Nobel prize this year: George Smith and Gregory Winter have won it for the ‘phage display’ technique of evolving proteins using viruses, alongside Frances Arnold for her work on directed evolution of enzymes in vitro. It’s heartening conformation that the Nobel committee recognises chemistry when it sees it, even if the work is conducted in departments of molecular biology. 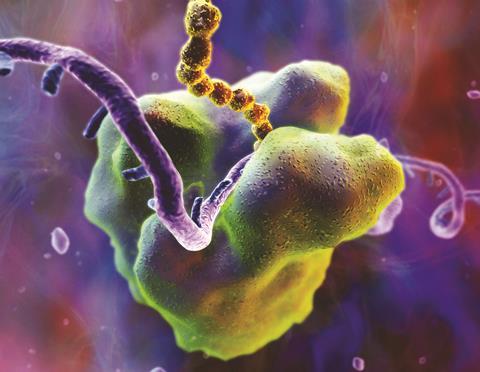 The same can be said for the 2009 prize, given to Ada Yonath, Thomas Steitz and Venki Ramakrishnan for deducing the molecular structure of the ribosome, the protein-making machinery of the cell. That trio used x-ray crystallography to map out the ribosome’s make-up, revealing how the massive assembly of RNA and proteins is able to translate messenger RNA into the peptide chains of proteins.

Ramakrishnan’s new book, Gene Machine: the Race to Decipher the Secrets of the Ribosome, offers a warts-and-all account of what was indeed a race – and sometimes a fractious one. Ramakrishnan doesn’t imagine that everyone will be well pleased by his view of the events, which has been called ‘brutally honest’. There are echoes, no doubt intended, of the highly personal and contentious tale of another Nobel-winning crystallographic triumph in molecular biology: James Watson’s The Double Helix, which described the rivalries in the quest to solve the structure of DNA. That book changed the way science could be written about (as well as some of the facts of the story). In some ways, the structure of the ribosome finished the story that Watson, Francis Crick, Maurice Wilkins and Rosalind Franklin began, explaining how the genetic code is used to create the molecules that make our bodies tick.

It is worth remembering, though, that our understanding of a molecular assembly – particularly, perhaps, one this large and vital – isn’t exhausted by discovering where every last atom resides in its structure. This is all too painfully true for the genome encoded in our DNA: you can gaze for as long as you like at the book in which its three billion base pairs are listed without standing much chance of figuring out what that structure implies. It’s true too for the ribosome. We can now see the ingenious mechanism by which it stitches together amino acids according to their mRNA template – but if we want to know why that mechanism is the way it is, we need to think beyond the positions of atoms.

That was made clear by Johan Paulsson, a systems biologist at Harvard University, and his coworkers last year.1 As with Crick and Ramakrishnan – who both initially trained as physicists – Paulsson shows how questions in biology can be enriched by perspectives beyond the life sciences. He first studied mathematics, and has brought that quantitative mode of thinking to bear on the matter of how biological systems cope with a noisy world.

In a cell, for example, concentrations vary and fluctuate in time and space. And yet the organism needs to maintain homeostatic steady state. What’s more, since such random variations apply also to gene expression, cells that are nominally the same might differ substantially at any instant in the levels of proteins they contain. What biological mechanisms and constraints, Paulsson asks, follow from this noise?

The ribosome might be expected to be especially sensitive to variability. For one thing, as well as its two or three strands of RNA, it comprises between 55 and 80 small proteins, depending on the species. Why so many, rather than just a handful of bigger proteins? What’s more, those proteins must themselves be made by ribosomes. How does it balance its regular protein-making duties with the need to make more ribosomes, especially given that cells can’t divide unless there are adequate ribosomes to sustain them?

These are questions beyond the molecule. As Paulsson has said, ‘Without understanding why [such] collective features exist, it is a bit like looking at a forest and understanding how chloroplasts and photosynthesis work, and not being able to explain why there are trees instead of grass’.

There’s a clear advantage in ribosomes being able to make themselves quickly. But what features best guarantee that? Paulsson and colleagues deduce that, for a structure made of RNA and proteins, there is an advantage to keeping the proteins small and numerous, rather than large and scant. That way, ribosomes can churn out lots of them probabilistically into a common pool and have a high chance of finding all the components needed to make a new ribosome. However, if they’re too numerous then it becomes challenging to assemble a ribosome to begin with. The optimal number of proteins per ribosome, they calculate, should be 40–85, with lengths 2–4 times smaller than average proteins. What’s more, it pays to keep their lengths similar.

These considerations also offer an explanation of why ribosomes use RNA to do its catalysis, rather than just proteins. It is quicker to make, so that even though RNA catalysts are less efficient, there is a net gain in production speed. As a result, RNA dominates the ribosome’s mass. In short, as the paper’s title says, ‘ribosomes are optimised for autocatalytic production’.

As the complexity of synthetic molecular systems – for self-assembly, catalysis, energy transduction and other functions – increases, there’s a design lesson: to optimise your molecules, you should keep sight of their role in the overall process, rather than seeking to perfect them in isolation.