Chemists are starting to learn that quantum is very, very cool

No matter how concrete the chemistry is, probability still governs whether a reaction takes place or not. But what if you could remove the guesswork? Last month we reported on a milestone in chemical physics: the first time that scientists have manipulated individual atoms to combine them into a single molecule.

Ultracold conditions made this experiment possible. Although ‘ultra’ seems inadequate when considering temperatures approaching absolute zero. Even interstellar space looks balmy by comparison, with its cosmic background radiation minimum of 2.7K. We’re safe to say that cold (below 1K) and ultracold (below 1mK) temperatures have only ever been reached in the lab. 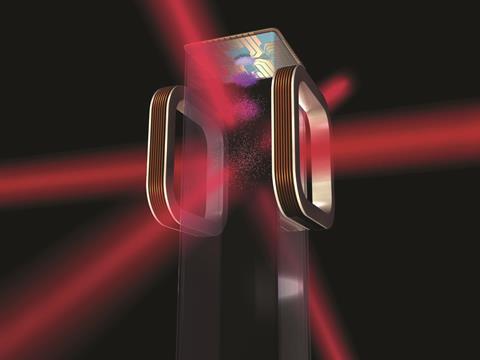 Scientists have been making solid progress at cooling particles down to extremely low temperatures for a few decades now and there are several ways to cool molecules into the milliKelvin range. The technical developments, including magnetic and laser-based methods, to cool and trap atoms at such temperatures are themselves remarkable. And graduating from ultracold atoms to ultracold molecules again required significant technical advances to shed molecules of their additional rotational and vibrational degrees of freedom. Ultracold atoms and molecules could themselves give rise to new types of lasers or be the basis of new high-resolution spectroscopy.

But chemistry at ultracold temperatures is far from frigid. Cold means slow. Slow means quantum. And quantum means control. Slow down a particle so much that its de Broglie wavelength becomes comparable to or longer than the distance between particles and quantum mechanical effects become more prominent. This means that scientists can use electric or magnetic fields, electromagnetic waves, or optical lattices to control those particles. Such control could be used to manipulate collisions with ultimate precision, or to induce reactions that wouldn’t otherwise happen, giving us insights into geometric effects or intermolecular interactions. The chemistry might be pretty basic but the legacy of such experiments could be extraordinary should they answer fundamental chemical questions.

Bose–Einstein condensates and superfluidity, and bosonic and fermionic atoms in various spin states may have been exciting physicists for a while now, but chemists are only just warming to the joys of ultracold research.