Building blocks of life made in space ice simulations

The sugar that makes up the backbone of RNA – ribose – has been produced in experiments that recreate the icy conditions found on comets and asteroids. This discovery suggests that some of life’s precursor molecules could have been delivered to Earth millions of years ago.1 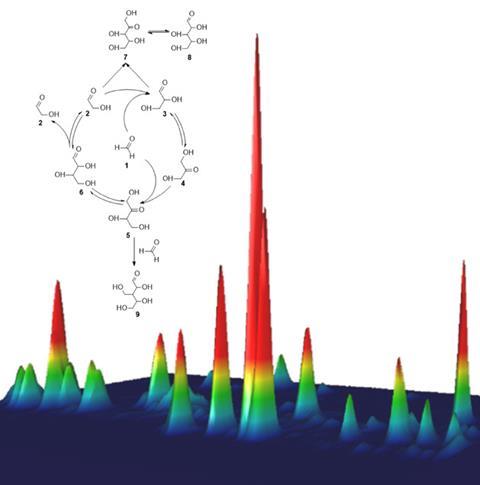 The formose reaction (top) produces ribose (8) and related sugar molecules, which the researchers detected by

Researchers working at France’s National Centre for Scientific Research (CNRS) detected ribose, along with several other related sugars, during experiments that simulate the kinds of ices found in the core of comets. The cosmic ices are created by condensing a mixture of water, methanol and ammonia onto a supercooled surface at temperatures of -195°C and in pressures one billionth that of Earth’s atmosphere, whilst irradiating the ice with ultraviolet light to simulate bombardment with cosmic rays. Last year the group found that glyceraldehyde – the smallest sugar molecule – could be formed in similar tests.2

‘We were wondering if even more complex and larger sugars can form in the ices,’ says Cornelia Meinert, one of the researchers involved. ‘However, we did not expect the large diversity and high quantity.’

The team observed a series of related sugars (aldopentoses) forming in the mix, including ribose, a key ingredient of the genetic polymer RNA. They suspect these sugars form via a process related to the formose reaction, in which complex sugars form from formaldehyde. ‘Like in a classical formose reaction we detected sugar alcohols and sugar acids – straight-chain and branched ones –  together with aldose and ketose sugars,’ says Meinert.

The team’s observations support the idea that some of the molecules crucial to the origins of life could have formed in interstellar ices, and were then delivered to Earth by comets or meteors.

Uwe Meierhenrich, the study’s lead author, says the findings also hint that the genetic material of any life on other planets could potentially be based around different sugars. ‘We did not only detect ribose, but many other sugar molecules,’ he says. ‘[This] does not necessarily hint to RNA that preceded DNA and evolved from ribose. Alternative nucleotide precursors might have played their role in chemical evolution as well.’

Scott Sandford, an astrochemist at Nasa’s Ames Research Center in the US, agrees that it is possible life elsewhere made different biochemical ‘choices’, and adds that the chemical complexity the CNRS team observed may give clues about the origins of life on Earth. ‘Modern life is very efficient – it uses RNA and DNA – but the original versions of proto-life almost certainly didn’t,’ he says. ‘Some of these other sugars that modern life doesn’t use may have actually played key roles back in the beginning.’

Next, Meierhenrich says, the team want to explore other questions such as the chirality of ribose. ‘We would like to understand the reason for which d-ribose is used in DNA instead of l-ribose,’ he says. ‘We assume that the reason for this symmetry-breaking event can be found in interstellar space.’