A bond between Rydberg atoms and ions has been observed for the first time by a group in Germany. Following the preparation of this highly unstable species, the team was able to demonstrate the molecular nature of the bond and measure various physical parameters including bond length. 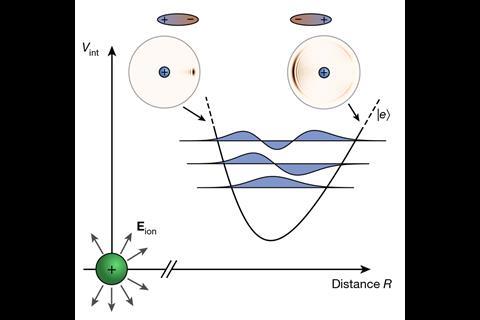 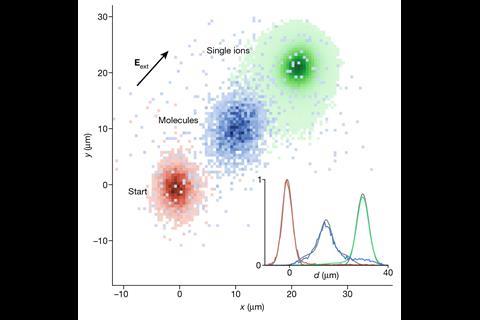 Rydberg atoms contain a high energy outer-shell electron, excited almost to the point of ionisation. Although first discovered in the 1970s, the difficulty of handling such a short-lived species hindered any significant experimental study and researchers instead focused on theoretical predictions of Rydberg behaviour. The advent of ultracold techniques later enabled scientists to begin investigating bonding, with Tilman Pfau and colleagues at the University of Stuttgart observing the first Rydberg molecule in 2009. However, until recently, these studies have been limited to neutral species.

Modern methods now allow users to manipulate ions at ultracold temperatures, meaning that Rydberg bonding has been extended to charged species for the first time. The Stuttgart team used an ion microscope to measure the bond length and molecular alignment of the interaction between a Rydberg atom and an ion, both of which agreed closely with theoretical predictions. At 4.3µm, this bond is substantially longer than classical covalent interactions and likely arises from the flipping dipole of the Rydberg atom interacting with the electric field of the ion. Time-of-flight mass spectrometry confirmed the molecular nature of the bond, allowing the researchers to compare the analyses of single ions with the Rydberg molecules. The group hopes to expand on this research further to form trimeric and polymeric systems with Rydberg atoms.