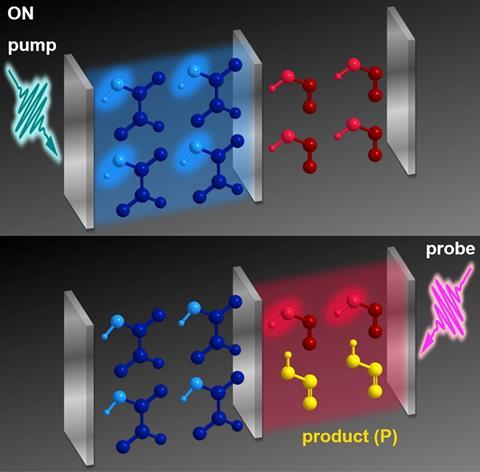 ‘We want to challenge the textbook paradigm that reactants and catalyst need to bind to each other to induce some chemical reactivity,’ says Joel Yuen-Zhou from the University of California, San Diego, US. Yuen-Zhou’s team has shown, at least in theory, that a catalyst trapped between two mirrors can control a reagent stuck between two adjacent mirrors – without the two ever touching. The concept could allow chemists to break bonds that they can’t access through other means.

What allows this to happen are optical microcavities. Mirrors set up at the right distance – only a few micrometres – from each other act as a resonator for light. By adding molecules into these cavities, scientists can create so-called polaritons.

‘When light interacts with matter, we often think of it as either reflecting or refracting or doing something that is fairly independent of the kind of optical excitation it came in with – till you think about light interacting with matter at a really small scale,’ says computational materials scientist Prineha Narang from Harvard University, US, who wasn’t involved in the study. ‘Light doesn’t look like light by itself, and matter doesn’t look like matter by itself.’

Polaritons are quasiparticles that are half light, half matter. Like molecular orbitals that form out of a combination of atomic orbitals, polaritons form out of a combination of photons and molecules. Yuen-Zhou and his co-workers Matthew Du and Raphael Ribeiro found that they can use this concept to get molecules talking to each other that are physically separated in neighbouring optical cavities.

In their theoretical setup, one microcavity holds glyoxylic acid – the catalyst – the other cis nitrous acid. When the glyoxylic acid is excited with the right infrared laser light, it forms polaritons. Although the cavities physically separate the compounds, they are coupled together because they share a central mirror.

As a result, forming polaritonic glyoxylic acid in one cavity boosts the cis–trans isomerisation of nitrous acid in the other by an order of magnitude. ‘People have done this with inorganic semiconductors, but from a chemistry point of view, this is the first proposal of this sort,’ says Du.

While their study is entirely theoretical, the researchers hope to have experimental evidence within the next few years. ‘This particular system I think is hard to realise, but there are many other alternatives,’ says Yuen-Zhou. ‘Overall, the concept is very general.’

‘I think that [Yuen-Zhou’s team] does great work,’ says Narang. ‘But when we think about how we use optical cavities to modify chemistry, I think we want to be a little bit careful in terms of generalising results from one or two chemical reactions to every possible reaction.’

‘The hope is – and that has not been shown yet – that you could select which reaction pathways you want to be favourable,’ explains Narang. This could be a boon for reactions like carbon dioxide reduction, she says, which have little preference for any particular pathway.

‘We are trying to find the magic boxes in which you need to put the molecules to do selective bond breaking,’ Yuen-Zhou says. ‘You could use optical cavities to control reactions that with chemical modifications you could not.’