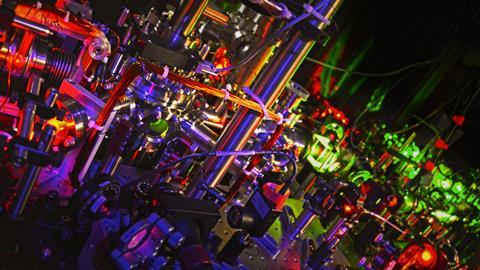 ‘We’re taking chemical systems down to their very simplest,’ says ultracold chemistry researcher Noah Fitch from Imperial College London, UK. Fitch is talking about chemistry’s newest, coolest frontier. Here molecules are cooled to a thousandth of a degree above absolute zero – colder than interstellar space – in an effort to pin down elusive reaction intermediates and allow scientists to drill down into the foundations of chemical reactivity. ‘It’s a new realm of chemistry,’ says Harvard University, US, physicist John Doyle.

Quantum mechanical rules govern all of chemical reactivity – but how exactly they do this is still a mystery. Ultracold molecules could shed light on the matter. At room temperature, reactants inhabit an enormous number of quantum states – 1010 on average – and interactions can only be studied by averaging. But at very low temperatures ‘you can detect non-classical interactions’, explains Tanya Zelevinsky, who works on laser-cooled molecules at Columbia University, US. ‘You get to observe these bizarre, non-intuitive phenomena that occur when molecules or atoms collide and react.’

Only recently, scientists discovered that by cooling water down to very low temperatures, its two nuclear spin isomers can be separated and react at different rates with diazenylium ions. These minute details might seem irrelevant for synthetic chemistry, most of which takes place around room temperature, but ‘if you actually know how reactions happen on a fundamental level, you can then add in the extra energy and build-up the picture that way’, says physical chemist Brianna Heazlewood from the University of Oxford, UK.

‘The overarching theme is to try to build an understanding of chemistry from the ground up instead of from the top down,’ says Fitch. This, Heazlewood thinks, will then help chemists to come up with better reactivity models and relate ‘our hand-wavy explanations to actual measurements’. Carried out at ultralow temperatures, even a simple nucleophilic addition could offer some surprises. ‘Can we stop the reactions and trap the intermediates? Can we confirm that what is in undergraduate chemistry textbooks is actually what happens?’ Heazlewood wonders.

But cooling down molecules by a factor of a million – from room temperature to below 1mK – is far from trivial. A technique that has been a favourite of physicists for several decades, and is now gaining traction in chemistry, is laser cooling (see box). Laser cooling can reduce atoms’ velocity so much that they can be cooled to approximately one millionth of a degree above absolute zero or 1μK. In 2015, researchers set a new record by laser cooling particles in a sodium–potassium alloy to 500 billionths of a degree above absolute zero – the coolest molecules in the universe.1 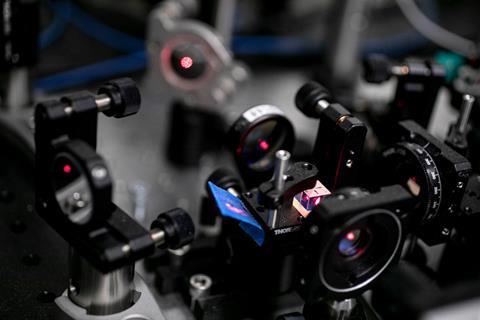 The laser cooling setup at the Doyle lab

These molecules, however, were not cooled from a room temperature gas but assembled from already cold atoms – a seemingly roundabout method that is rooted in the way molecules behave during laser cooling. There is a problem for chemists though, as they’re more interested in dealing with molecules than atoms. Compared with atoms, however, molecules’ complex energy level structure makes them exponentially more difficult to laser cool.

Trick of the light to keep your (molecules) cool

To reach the kinds of temperatures ultracold chemistry takes place at a laser needs to be tuned to an energy transition that excites the system. Every time the system falls back to its ground state, emitting a photon, it loses momentum and is cooled. The system can then absorb another photon, repeating the cycle.

But a photon’s momentum is tiny compared with the momentum of a speeding atom – ‘it’s like a bowling ball rolling down the bowling alley and you’re throwing ping pong balls at it’, says Fitch. To supercool a system, each atom needs to scatter around 10,000 photons.

This only works if the system drops it back into exactly the same quantum state it was in before absorbing the photon – otherwise, it will go ‘dark’, meaning it has escaped to a different energy level that can’t be excited by the same wavelength of laser light. Atoms – in particular alkali and alkaline earth metal atoms – have energy structures so simple that they have few ways to go dark. And in case they do, researchers have come up with a re-pump laser, which nudges dark atoms back to a laser-resonant state.

Molecules’ energy landscape, however, is vastly more complicated: they can rotate, vibrate and often have an intricate electronic energy level system. ‘It’s like a soup of things with all these different degrees of freedom and they can be coupled to each other,’ explains Ye. ‘If you’re not careful, they just go down an energy landscape rabbit hole and they are gone, you can’t address them with the laser again.’ 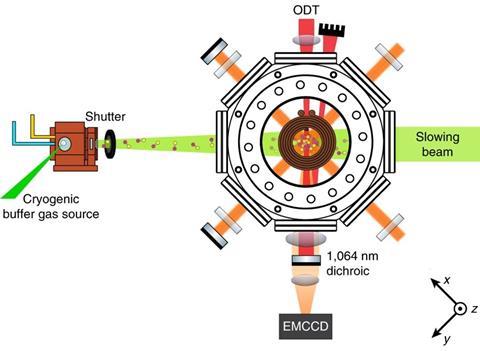 Nevertheless, scientists are making headway in cooling molecules. ‘I think it’s very exciting that people are starting to work on things like calcium fluoride – a recent success from Harvard and Imperial College,’2.3 says Jun Ye, who studies ultracold matter at the University of Colorado, Boulder, US. ‘Do I think of calcium fluoride as a chemist’s molecule? Perhaps not the most exciting one, but you can still use them to study molecular collisions or molecular scattering.’ 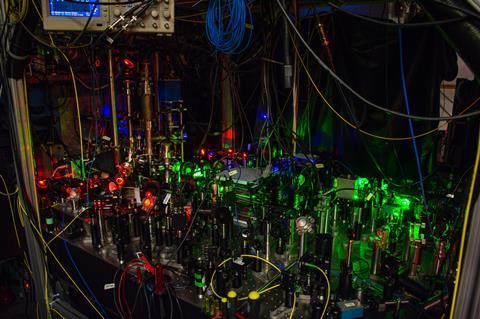 Laser cooling can chill matter to temperatures colder than those found in interstellar space. In this setup the slowing lasers can be seen in the foreground and the magneto-optical trap chamber in the background

‘We’re moving very rapidly towards larger and larger molecules,’ agrees Doyle. In 2017, his team laser cooled the first triatomic species, strontium hydroxide radicals, to less than 1mK.4 Doyle thinks that this method could also work on other alkaline earth metal pseudofluorides, like strontium methoxide.5 ‘The key idea is that the metal–oxygen bond results in a single electron whose orbital is pushed away from the oxygen. That electron acts like it’s on an atom rather than on a molecule and the rest of the molecule is just along for the ride,’ he explains. ‘This hasn’t been proven in the lab yet but the theory is very robust. I would say molecules like isopropoxides [will be cooled to microkelvin temperatures] certainly within five years.’

For now, researchers wanting to study more complex molecules have to fall back on other methods like Coulomb crystal trapping. Alkaline earth metal ions trapped within an electric field form ordered arrangements – Coulomb crystals – that can immobilise other ions within its lattice. Laser-cooling the lattice ions indirectly cools the trapped species too.

Coulomb crystal trapping has allowed scientists to study molecules vastly more complex than those available for direct laser cooling. Already in 2009, researchers trapped the triterpenoid glycyrrhetinic acid in a barium ion crystal at 150mK to study the biomolecule’s photodissociation rate.6 More recently, Heazlewood’s team has started to work on multi-atom reactions, like the charge exchange between xenon cations and trapped ammonia at around 1K.7

However, ‘most molecular ions studied in Coulomb crystals are not internally cold’, explains Heazlewood. While trapped species are by definition not moving, their rotational and vibrational energy levels can be as populated as if they were sitting on a lab bench at room temperature. ‘The word temperature is debated a lot in the community. The word assumes everything is in equilibrium, but there can be quite a big difference between translational and internal energy,’ says Heazlewood.

To make internally cold trapped molecules, Heazlewood’s team is one of a number working on cryogenic setups. ‘I don’t think it’s going to be one particular technique that will allow us to cool down all kinds of molecules – we don’t have this kind of magic bullet,’ says Ye.

Instead, combining techniques might be the way forward. Kang-Kuen Ni’s team at Harvard University, US, laser cooled caesium and sodium atoms, then trapped one of each in optical tweezers and brought them together to form a single molecule in a photoassociation reaction. While atomic force microscopy allows chemists to manipulate individual atoms on solids, Ni’s experiments lead the way to untethering chemistry from surfaces.

‘The long-term dream of chemical physicists would be to do quantum controlled synthesis,’ says Zelevinsky. She describes the idea of putting molecules into a single rotational, vibrational, electronic and hyperfine state, and finding out how this influences their reactivity. ‘If you have a big molecule and you can control its quantum state you could imagine using a well-tailored light pulse to break the molecule at any particular bond site, which is currently not possible,’ Zelevinsky adds.

‘[Quantum controlled synthesis] is the holy grail of understanding fundamental chemical processes,’ says Doyle. But materials science could also benefit as ultracold molecules help scientists uncover how properties like magnetism or superconductivity emerge. Ultracold molecules could even compete with the Large Hadron Collider in searching for answers to the universe’s physical nature.

Moreover, Fitch thinks that ultracold molecules ‘would make nice qubits’, the basic units in quantum computers. Molecules’ complex energy level systems – exactly what makes them so hard to laser cool – could turn into computing control knobs. ‘But whether ultracold molecules are actually a viable solution is still unknown,’ Fitch points out. ‘We’re transitioning from techniques to scientific questions,’ says Zelevinsky. Heazlewood agrees: ‘I think the field is moving towards studying reactions that are more generally interesting to those outside the community – though I think that there is still sometimes a lack of communication [between the chemistry and physics communities] about what is interesting and what is worth studying.’

‘The way science goes is that there might be some reasons for driving a field forward at the time, but what research ends up coming out of that might be something that no-one had ever guessed,’ says Doyle. ‘We are now making molecules that are orders of magnitude colder than 10 years ago and the history of science has shown us that something really incredible will happen.’