Chemical reactions are carried out at all scales: from microreactors and laboratory flasks to huge industrial tanks. US researchers have now taken things to one extreme, scaling a reaction down as small as it can go. They used optical tweezers to hold an individual atom of sodium and one of caesium, and brought them together to form a new molecule, an alloy of those two metals.

When molecules can be assembled or disassembled under fully quantum mechanical processes, then we have gained a full control of chemistry

Reactions normally proceed through the random collisions of particles. The events that bring those atoms together, the making and breaking of bonds, the shuffling of electrons, all depend on probabilities. This means, unfortunately, that getting a close-up view of what really happens when one atom meets another is always just an average of the bulk reactants. Some techniques get close, but observing a single pair of atoms interacting would be the ultimate perspective.

Kang-Kuen Ni at Harvard University and her colleagues reasoned that getting this perspective would require trapping individual atoms and bringing them together under strict control – rather than letting nature and diffusion, or the vagaries of crossed molecular beams handle the process. The team’s minimalist approach involves trapping a single atom of sodium and a single atom of caesium in two separate optical tweezers. The tweezers themselves are an ultracold laser tool that allows an atom or other larger entity to be held in a beam of light. The team prepared their laser cooled sodium and caesium atoms in overlapped magneto-optical traps in a vacuum chamber. The optical traps hold each atom ready for them to be loaded into the optical tweezers and are extinguished once the tweezers are primed. 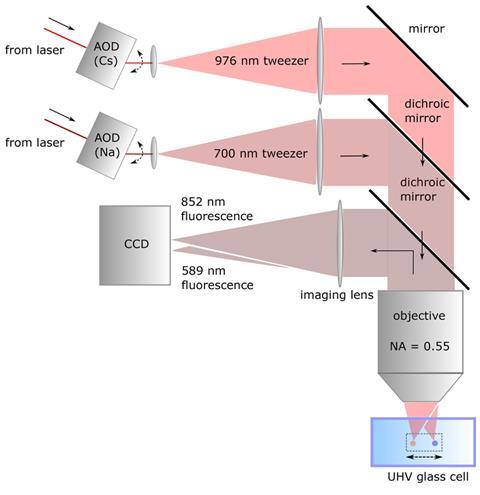 The sodium atom was manipulated by one set of optical tweezers and the caesium atom by another. The tweezers, which were operating at temperatures under 1μK, guided both atoms to their reaction chamber where they formed the molecule NaCs

One set of optical tweezers has a frequency of 700nm, the other 976nm. The different polarisabilities of sodium and caesium means that the former associates with the 700nm tweezers and the latter the 976nm one. The two atoms can thus be held apart and manipulated individually in the tiny volume at the focus of the two optical tweezers. The team were then able to bring the two atoms together into a single dipole trap where they were converted into a molecule with the aid of a photon – a photoassociation reaction. The team then used single-molecule spectroscopy to monitor the reaction and determine the chemical characteristics of the product. The photoassociation spectrum provides clear evidence of a single molecule containing one atom of sodium and one of caesium.

‘The experimental demonstration represents for the first time that a chemical reaction process is deterministically controlled,’ says Jun Ye of the National Institute of Standards and Technology and the University of Colorado in US. ‘Control of molecular interactions, including reaction, at the most fundamental level has been a long-standing goal in physical science. When individual constituents can be brought together, and molecules can be assembled or disassembled under fully quantum mechanical processes, then we have gained a full control of chemistry. The current experiment represents a solid step towards these goals.’

The team suggests that it might now be possible to create other bi-atomic molecules that go beyond what is essentially an alloy of two alkali metals. Such molecules would, as does the NaCs molecule, exist in a single quantum state. This might make them useful as qubits – the quantum equivalent of bits in a conventional computer – in a quantum computer, where a vast array of traps and tweezers could be used to create a three-dimensional array of qubits.

‘Future work will include gaining control over all quantum degrees of freedom of single molecules (in additional to the particle number control) and scale the system to one- and two-dimensional arrays for quantum computing and quantum simulations,’ Ni tells Chemistry World.