A chemistry opera gives reason to face up to the role of scientists in war, says Philip Ball

‘Chemical warfare is the most humane method of warfare yet devised by man.’ That opinion, voiced in 1937 by Augustin Prentiss, a lieutenant colonel in the US chemical corps, sounds shocking today. We might not be too surprised to find Fritz Haber held a similar view of poison gas in 1919, describing it (during his Nobel prize presentation, no less) as a ‘higher form of killing’. But it was also endorsed in 1938 by James Kendall, then professor of chemistry at the University of Edinburgh, who had served in the US navy as liaison officer with the Allied services on chemical warfare during the first world war. Kendall was arguably the leading British expert on the subject, and his book Breathe freely!, published just as Europe seemed to be sliding inexorably towards a new international conflict, sought to dispel what he regarded as hysterical myths about such agents. 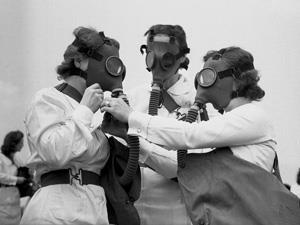 ‘The general public,’ Kendall wrote, ‘has been systematically taught ever since the introduction of gas warfare in 1915 to regard poison gas as the most diabolical and detestable invention ever made – a weapon of war which is so horrible as to make all other weapons kindly in contrast.’ But in terms of both the casualties inflicted and the nature of the deaths or injuries, Kendall argued, poison gas in the first world war was far less horrible than conventional armaments.

The evils of war

In the event – which Kendall considered likely – that Germany went to war with the UK and launched airborne gas attacks on civilians, there was really little to fear. ‘Don’t play into the enemy’s hands by indulging in foolish and unnecessary panic,’ he warned. For ‘ultra-pacifists’ and other alarmists, among whom he counted H G Wells, Kendall had harsh, even contemptuous words. His book is fascinating reading, both as a counterpoint to the almost universal abhorrence of chemical weapons today and as an indication of the state of mind that existed in Britain on the eve of the second world war.

Was Kendall right? Despite the general issue of gas masks to civilians, gas attacks did not play a significant role in the war – largely, it seems, because of fears of retaliation. But Kendall doesn’t appear to have anticipated the development of agents much more fearsome than chlorine and mustard gas, especially the nerve gases tabun, soman and sarin that were stockpiled by the Germans. Of course, they used deadly gases to terrible effect in the concentration camps, but perhaps one can forgive Kendall for not imagining the barbarity of which governments are capable. And of course, the reputation of poison gas as the most horrible weapon ever devised was eclipsed anyway by the use of atomic bombs against Japan at the end of the war.

Nevertheless, there’s some resonance in Kendall’s implications of hypocrisy, in the way that chemical warfare is now subject to bans and general condemnation while nuclear weapons are defended as a necessary evil; and, perhaps worse still, while the devastation and slaughter caused by conventional arms is seen as no impediment to glitzy arms fairs smiled upon by democratic governments.

Phantoms in the opera

The debate around chemical warfare is just one reason to welcome a new exploration of Kendall’s milieu in the chamber opera Breathe freely by Scottish composer Julian Wagstaff. The opera was commissioned by the University of Edinburgh’s chemistry department in 2013 as part of their tercentenary celebrations of the first professorship in chemistry at the university. Wagstaff had previously collaborated with the department on his piano trio A persistent illusion for the International Year of Chemistry in 2011.

The latest commission shows what unexpected harvests may come from such collaborations. Kendall’s work was well known to the department, but in digging into the archives Wagstaff discovered that he had been assisted during wartime by the Polish chemist Stanislaw Hempel, a military officer with a colourful past. Before fleeing from the Nazis, Hempel had been a socialist activist and freedom fighter who opposed the Russian invasion of Poland and took part in a political assassination. In Wagstaff’s opera, Hempel claims that there is no such thing as purely defensive wartime science: it is all aimed at killing the enemy. Such views and actions shock the third character in the scenario, the chemist Chrissie Miller, whose skill at analytical chemistry and patient teaching are both still fondly remembered at Edinburgh (Miller died at the age of 101 in 2001).

Wagstaff’s is certainly not the first opera in which, in truth, nothing much happens: Hempel arrives in Edinburgh, chats with Kendall and Miller, they carry on their work, then the war ends with their classified research inconclusive and liable to be buried. That isn’t the point. By turns witty and sombre, tonal and atonal, the music is engaging in its own right – as you can now hear for yourself following the launch of the CD at the Royal Society of Chemistry in October. But Breathe freely also opens up questions about the responsibilities of scientists in wartime, and why it is that we choose to deplore and prohibit some weapons while tolerating or even condoning others.