Scientists in the UK have developed supramolecular cages that can trap chemical weapon simulants using the hydrophobic effect. 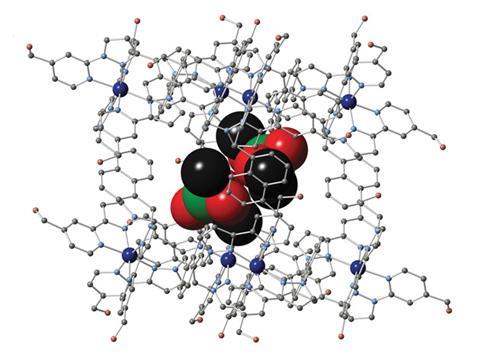 Organophosphorous chemical weapons, such as sarin and soman, interfere with signals between nerve cells, and have recently been used to deadly effect in places such as Syria. Researchers are therefore trying to develop techniques that detect these chemical weapons in the environment, and destroy them.

Mike Ward and his group at the University of Sheffield in the UK may have found a way, using self-assembled supramolecular cages – large, hollow molecular structures that can act as a host to smaller molecules. Such structures have been around for a while, but the ones made by Ward are exciting because they can bind alkyl phosphonates within them. Alkyl phosphonates have the same basic size and shape as the chemical weapons in question, but lack the reactive leaving group that makes them so dangerous so researchers often use them as chemical weapon simulants in the lab.

The host cages have a cobalt or cadmium dication at each vertex and a bis(pyrazolyl-pyridine) ligand along each edge. In water, the hydrophobic effect drives interactions between the cage and alkyl phosphonates. ‘The interior surface is lined with CH groups from the ligands, which is an archetypal hydrophobic surface – oil and water don’t mix for the same reason,’ explains Ward. ‘It thus acts as a haven for molecules that are not happy in water. For the guests, their alkyl chains provide the hydrophobic contribution to binding. We can see this because, as the size of the alkyl groups increases, binding gets stronger – even though the phosphonate bit stays the same in every case.’ It is energetically favourable for this hydrophobic guest to enter the hydrophobic cavity because each guest displaces two bound water molecules, allowing them to form hydrogen bonds with each other, and increasing the total entropy by being free to move around.

The cage is also luminescent, but dims when an alkyl phosphonate enters. ‘This approach is very elegant as it combines sequestration with a fluorescent response – locking up the chemical warfare agent simulant within a coordination cage and signalling its presence,’ comments supramolecular chemist Philip Gale, from the University of Southampton, UK. ‘Chemical weapons can be destroyed by chemicals such as powerful oxidants in bulk situations but highly selective analysis and detection systems are very much needed, particularly security-sensitive locations,’ adds inorganic chemist Jonathan Steed from Durham University, UK.