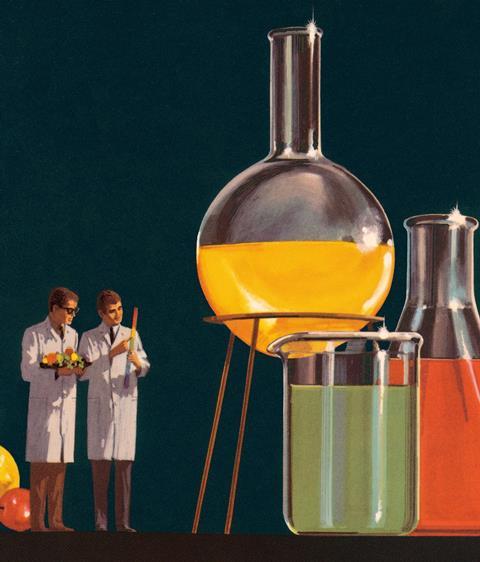 You, as a synthetic organic chemist, have just performed a successful reaction in your fume cupboard. This does not happen every day in research, so that’s a good start. Let’s say that it’s on a 100mg scale, which depending on your type of work will be either a small test reaction or an amount of product far more goodly than anyone will ever need. Assuming it’s the former, you will then need to scale things up. Perhaps you are starting a natural product total synthesis, and may need to take this material through another 20 steps or so (in which case good luck to you, and we’ll see you in a few years), or you’re a medicinal chemist optimistic about this compound’s prospects as a drug, and you now need half a kilo to run the next stage of preclinical assays. Good luck on that one, too.

At any rate, you’ll be entering a different world of chemistry. A common problem is that the small reaction may have used a reagent that’s too expensive to use in larger quantities, or (in extreme cases) simply isn’t available. But that aside, as you may already have learned – often through bitter and/or dramatic experience – large reactions are not simply small reactions run in different glassware. Everything changes. The options for isolating and purifying your product, for one, may have narrowed. Fancy chromatography may not be feasible on larger piles of material, so you could find yourself re-discovering the virtues of older techniques such as crystallisation and even vacuum distillation. But before you worry about what to do with all that product, you have to run the reaction itself successfully, and that requires forethought.

For example, you stirred your 25ml flask with a small, plastic-coated magnet. But no one makes those magnets the size of baguettes, nor the motors to stir them. Efficient mixing in a larger vessel is usually a matter for mechanically-driven whisks and paddles, run via shafts and fittings. And you will need that sort of mixing, especially if your reaction is heterogeneous from the start – efficiently dispersing some solid reagent on scale is not a trivial problem. But you’ll also need good mixing even if your reaction is simply being run at higher or lower temperatures.

Large reactions are not simply small reactions run in different glassware. Everything changes

Your small flask’s temperature could be easily handled by suspending it in some sort of ice, oil, or sand bath, but all of these depend on heat moving through the flask walls. This is fine when nothing in the vessel is more than a centimetre from that wall, but the middle of a large reaction flask may not have heard about what the temperature out in that zone might be. And it might have other ideas entirely, especially if there’s an exothermic reaction involved. The larger your scale, the more you will want to scout out such exotherms with great care, since a sudden liberation of heat can lead to anything from a messy geyser to an outright detonation.

The larger the vessel, the worse all these problems become. Scale-up chemists are always fighting the mathematics: while the surface area increases as a square, the volume must go up as a cube. In graduate school, I was handed a prep for a common intermediate whose exotherm, I was told, would allow it to ‘just stay inside’ a one-litre round-bottomed flask. They were right. But a colleague of mine got to discover that doubling the amounts would very much not allow it to stay inside a two-litre flask, instead distributing its contents broadly and vigorously.

I have never worked at more than about a three-litre scale myself, but that is more than enough to experience some of these effects. Watching a sudden temperature rise or evolution of gas on that scale can be completely terrifying, driving home as little else can the implacable nature of thermodynamics. There’s a vivid feeling of ‘Well, here we go’, because heat and pressure do not care about your plans for the evening. They will find their outlet, wherever that may be, and if that means that you have to dive for cover or spend the next few hours scraping your material off the ceiling of your fume hood, that’s how it is. And if you are so foolish as to run your reaction the same way the next time: well, you were warned.