What is a molecule?

In science, as in life, words often acquire meaning through usage rather than through definition. We use ‘species’ and ‘force’ without being troubled by their imprecision. The same can be said about ‘molecule’. 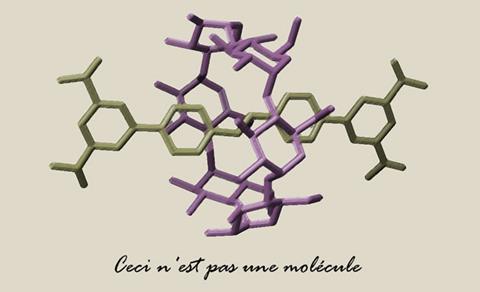 For example, it has been defined as: ‘The simplest unit of a chemical compound that can exist, consisting of two or more atoms held together by chemical bonds.’

Another definition goes like this: ‘The smallest particle of a substance that retains the chemical and physical properties of the substance and is composed of two or more atoms; a group of like or different atoms held together by chemical forces.’

But in this second definition, ‘the smallest particle of a substance that retains its properties’, is pretty meaningless. Which properties? After all, most of those we focus on, such as melting point, are bulk properties. And the idea that molecules are two or more atoms held together by chemical bonds gets us in to the murky business of defining a bond (which some consider to include van der Waals forces and ‘mechanical bonds’) and distinguishing molecules from, say, ionic crystals (as Gilbert Lewis first did a hundred years ago).

The problems with these definitions were highlighted by a recent suggestion by Nature Chemistry’s editor Stuart Cantrill that catenanes and rotaxanes – entities consisting of distinct covalently bonded assemblies mechanically conjoined (threaded rings, for example) – must be considered molecular, not supramolecular. The result was a (good-natured) Twitterstorm, as other chemists pitched in with their views.

What, you might then ask, defines ‘supramolecular’? The field’s pioneer, French chemist Jean-Marie Lehn, uses the term to describe assemblies ‘held together by non-covalent interactions’.1 That would certainly seem to include catenanes (although is it covalent or van der Waals forces that ultimately prevent separation of the components?). Yet it would also include the DNA double helix, protein conformations, molecular crystals, coordination complexes and liquid water. That makes it a rather unwieldy, excessively broad term.

So how can we differentiate molecules from supermolecules or condensed phases? If molecules mustn’t easily fall apart into, and establish an equilibrium with, their separate but individually stable components, then what are we going to call weak acids or indeed water? If rotaxanes (where a cyclic molecule remains threaded on a linear one because of bulky capping groups on the thread) are molecules, what about pseudorotaxanes, where there are no end caps and the threading is merely statistical, or held in place by weak interactions? One can clearly engineer a progressive free-energy barrier to unthreading with increasingly bulky end groups; is that then a gradual transition from supermolecule to molecule? At what temperature? In which solvent?

It seems that when Lehn called supramolecular chemistry a ‘chemistry beyond the molecule’ he was alluding to a very hazy frontier. Likewise, US chemist George Whitesides’ suggestion that chemistry should move ‘away from the molecule’ (in a paper provocatively titled ‘Is the focus on “molecules” obsolete?’)2 raises the question of what, exactly, it is that the subject should be moving away from.

Neither Lehn nor Whitesides are challenging the status of the molecule as the unit of chemistry. Rather, they argue that chemistry can broaden its explanatory framework and practical capabilities by considering how molecules interact, combine and coordinate to produce functionalities at higher levels of the scale hierarchy. ‘Molecule’ is used not as a tightly-defined way of joining up atoms, but as a shorthand term for a certain scale and mode of chemical thinking.

That’s probably the best way to see it. Calling a ‘molecule’ an indivisible unit of a compound reflects chemistry’s historical focus on pure substances – on purifying and characterising bulk compounds. But chemistry really comes into its own in mixtures – including the incredible, organised complexity of the cell. The molecule is a necessary construct for analysis, but loses some of its precision in the context of collective functions and properties.

But come now. Is there really any conceptual problem when we talk about protein molecules orchestrating cell functions? Or molecular intermediates in surface catalysis? Of course not. Rather, this is surely just an example of the problem of ‘natural kinds’, debated by the philosophers of science (while understandably ignored by its practitioners): we need words and categories to formulate scientific ideas, but the world is not obliged to respect them.

Scientific words and phenomena overlap well enough to permit discussion and theorising; we scarcely need be surprised or disconcerted when we find that the correspondence isn’t always perfect. Chemistry makes more use of fuzzy but valuable concepts (oxidation state, bond, electronegativity) than does physics (phases, forces); biology probably uses even more (species, allostery, ecosystem, gene). There’s no pressing need to police the boundaries of these words, other than to entertain ourselves. Mindful of which, I ask: how do you define a molecule?