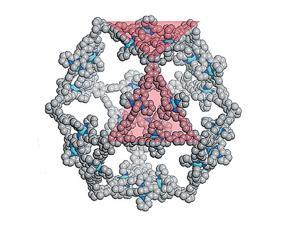 Scientists in the US have made a large, self-assembling molecular cage that resembles an intricate shape first drawn by the Greek mathematician Archimedes.

Chemists have always sought inspiration from complex patterns in nature to create exotic molecular structures, with the most recent effort by scientists in China being influenced by the triangular-tiled nave of the Roman Basilica of Santa Maria in Cosmedin, Italy. Another source for elaborate arrangements lies in the intricate designs of Archimedes’ 13 polyhedra – highly-symmetric 3D objects that are composed of two or more different shapes.

George Newkome and his colleagues from the University of Akron have now synthesised one of these polyhedra, a cuboctahedron, using a terpyridine-based ligand and 24 Zn2+ or Cd2+ ions. The large molecular sphere is 6nm in diameter and can transform into different octahedra when diluted.