This week, Brian Clegg takes down the particulars of a widely used industrial acid. 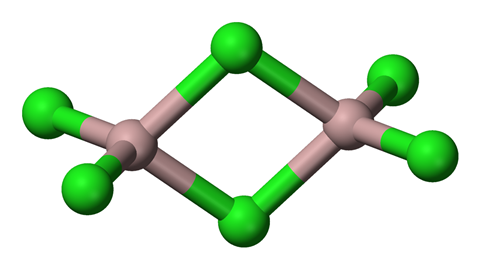 The apparently straightforward inorganic compound aluminium chloride – AlCl3 – has a number of structural surprises up its sleeve, yet it is best known as the doyen of Lewis acids, making it a highly effective catalyst in organic reactions.

Although ‘Lewis’ may now conjure up images of a TV cop, the name refers to the American chemist Gilbert Lewis, who in the early part of the twentieth century was at the forefront of understanding the roles of electrons in chemical bonding. (Physicists, though, remember him as the originator of the name ‘photon’ for a quantum of light.) 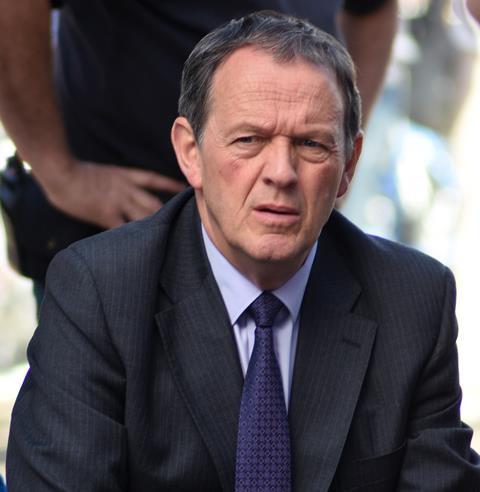 Lewis came up with a new definition of acids and bases, where an acid was an atom or compound that had space in an outer orbital of its sub-atomic structure. This could accept an electron pair to form a bond with another element or molecule. A base, correspondingly, had a spare electron pair in an outer orbital. This means that a Lewis acid can be a lone proton or a structure like aluminium chloride, very different from familiar compounds such as nitric or sulfuric acids.

This process is widely used in dye production, where a range of dyes can be developed from benzene, using the aluminium chloride catalyst to add building blocks. A similar role finds it catalysing reactions for production of plastic, rubber and lubricants.

For its use as a Lewis acid, manufacturers are looking for the simple anhydrous aluminium chloride, a white crystalline solid made by reacting aluminium with chlorine or hydrogen chloride at high temperatures. Maintaining the aluminium chloride in this pristine state means keeping it away from water – if it gets damp, there is a vigorous, bubbling reaction as the hydrated form develops, adding six water molecules to each aluminium chloride.

The resultant aluminium chloride hexahydrate is no longer a Lewis acid, but found use in early deodorants where it was employed for its antiperspirant effects. The hexahydrate combines with electrolytes in sweat to block up the sweat gland, reducing perspiration. Aluminium chloride solutions are still employed for medical conditions resulting in excessive sweating, but modern deodorants are most likely to use more sophisticated aluminium complexes. 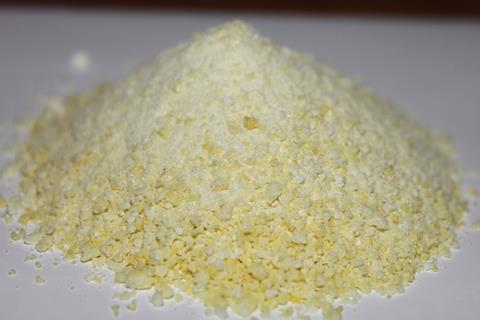 Source: By Xlollitox (Own work) [CC BY 3.0 (http://creativecommons.org/licenses/by/3.0)], via Wikimedia Com

Heating aluminium chloride under normal conditions results in sublimation directly from solid to gas at around 180 degrees Celsius. But put it under double atmospheric pressure or more and it stays solid until around 192 degrees, when it melts. Rather than producing individual aluminium chloride molecules, the result is dimers – double aluminium chloride molecules with an elegant parallelogram-shaped central structure. What’s happened here is a change in bonding from the ionic bonds of the solid crystal – with six chlorine atoms around each aluminium, to the shared electrons of covalent bonds in the liquid – where each aluminium atom is surrounded by four chlorines. Heat the liquid further still and before it vaporises it separates into individual AlCl3 molecules.

It might seem that this simple inorganic compound is rather dull. But when it takes its place in industrial reactions as a Lewis acid, you are likely to detect some catalysis that make sure the reactions don’t plod along – and its role in antiperspirants keeps the most energetic TV detective dry.

Please forgive us for those criminal puns. That was Brian Clegg with aluminium chloride. Next week, Katrina Krämer gets radical.

There’s a theory that free radical damage to living cells is the sole cause of aging. Although this theory is highly controversial, certain nutrition websites love this idea and have promptly declared radicals ‘our aging enemy’.

Kat chats to Daniel Allwood, an organic chemist at Sheffield Hallam University, about TEMPO, a particularly useful and stable radical, next week. Until then, send us your ideas for things to cover – email chemistryworld@rsc.org or tweet @chemistryworld. Thanks for listening, I’m Ben Valsler.