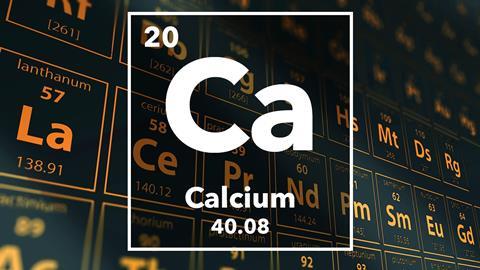 The element that gives us cement, plaster of Paris, hard teeth and hard water

Hello, welcome to this week's Chemistry in its element, I'm Chris Smith. This week it's the turn of the element that gives us cement, plaster of Paris, our own bones, hard teeth and hard water.

Milk, cheese, yogurt, spinach, almonds. What element do they all have in common? It's calcium of course! But whilst most off us immediately think of food when someone mentions calcium (and I personally hold the old milk TV adverts accountable for this), it actually has a far bigger role in our lives than that. Calcium is all around us. The average human contains approximately 1kg of calcium, of which 99% is stored in our bones. It is the 5th most abundant element in the Earth's crust, occurring widely as calcium carbonate which is more commonly known as limestone. It is also the fifth most abundant dissolved ion in seawater. 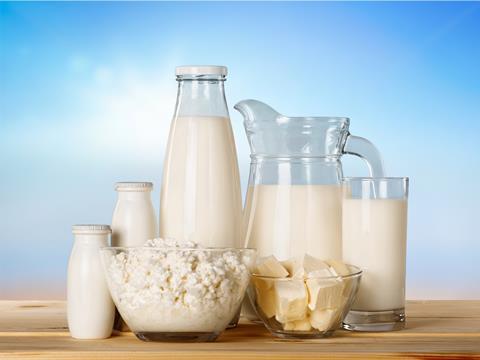 Calcium was named after the Latin term calx meaning lime, and is a reactive silvery metallic element found in Group 2 of the periodic table. It was first isolated in 1808 in England when Sir Humphry Davy electrolyzed a mixture of lime and mercuric oxide. Today we obtain calcium through the electrolysis of a fused salt such as calcium chloride. Once exposed to air, elemental calcium rapidly forms a grey-white oxide and nitride coating. Unlike magnesium, calcium is quite difficult to ignite, but once lit, it burns with a brilliant high-intensity red flame. 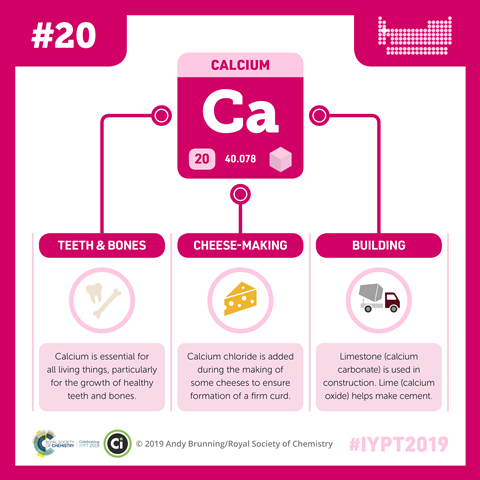 The compounds of calcium are however much more useful than the element itself. Literature dating back to 975 AD shows that plaster of Paris (which is calcium sulphate) was used even then for setting broken bones. Calcium oxide (also known as lime or quicklime) is a major component of mortar and cement. The production of cement using calcium oxide has long been known; it was used by the Romans and also the Egyptians who built the Great Pyramid of Giza and Tutankhamen's tomb. Calcium fluoride is also well known for being insoluble and transparent over a wide range of wavelengths, making it useful for making cells and windows for infrared and ultraviolet spectrometers. 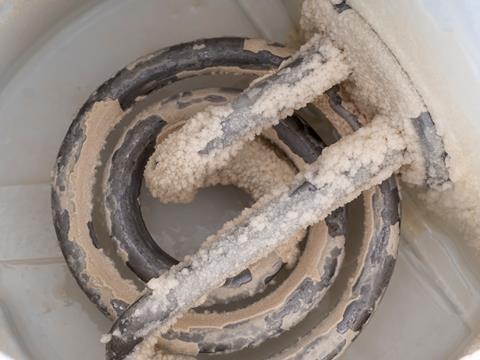 Our drinking water also contains calcium ions – more so in so called hard water areas. Hard water is the term used for water with a high proportion of calcium and magnesium (2 plus) ions. The calcium usually enters the water as it flows past either calcium carbonate, from limestone and chalk, or calcium sulfate, from other mineral deposits. Whilst some people do not like the taste, hard water is generally not harmful to your health. Although it does make your kettle furry! Interestingly, the taste of beer (something dear to my heart) seems related to the calcium concentration of the water used, and it is claimed that good beer should have a calcium concentration that is higher than that of hard tap water. 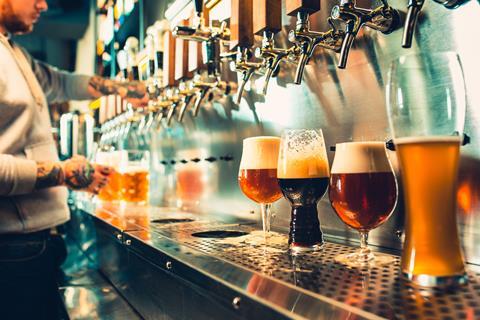 Calcium is what is known as an essential element, meaning that it is an element which is absolutely necessary for life processes. Which is what the old milk TV adverts were trying to tell us after all. Calcium is used to produce the minerals contained in bones, shells and teeth through a process called biomineralisation. Calcium phosphate (also known as hydroxyapatite) is the mineral component of bones and teeth and is a particularly good example of how organisms fabricate 'living' composite materials. Indeed, the different properties (such as stiffness) of bone are produced by varying the amount of organic component, mostly a fibrous protein called collagen, with which hydroxyapatite is associated. The bone in our body functions not only as a structural support, but also as the central Ca store. Thus, during pregnancy, bones tend to be raided for their Ca in a process called demineralisation. Bone does not last forever; a serious medical problem is osteoporosis which is the decalcification of bone. This loss of bone mass which occurs with increasing age makes bones more susceptible to breaking under stress and it occurs mainly in older people, especially women.

Calcium ions also play a crucial role in higher organisms as an intracellular messenger. Fluxes of Ca2+ trigger enzyme action in cells in response to receiving a hormonal or electrical signal from elsewhere in the organism. Calcium is also very important in helping blood to clot. When bleeding from a wound suddenly occurs, platelets gather at the wound and attempt to block the blood flow. Calcium, vitamin K, and a protein called fibrinogen help the platelets to form a clot. If your blood is lacking calcium or one of these other nutrients, it will take longer than normal for your blood to clot. 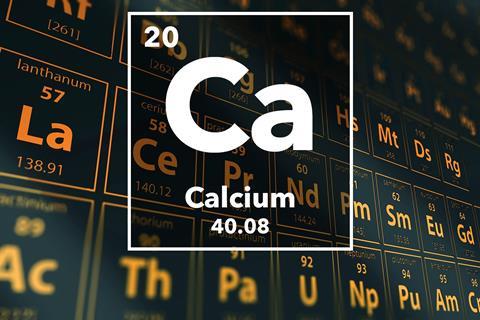 The ability to detect extremely small amounts of an element can be a very useful adaptation for an animal if that element is important to it. For example, hermit crabs, which inhabit second hand shells and change to newer, bigger shells as they grow, have the ability to recognise shells suitable for occupation not only by feeling for them, but apparently also by measuring the minute amount of calcium carbonate that is dissolved in the water around a shell. They can readily distinguish natural shells containing calcium carbonate from calcium-bearing replicas made from calcium sulphate. The concentration of calcium detected by the hermit crab is in the order of 4ppm or less, which is amazingly low. 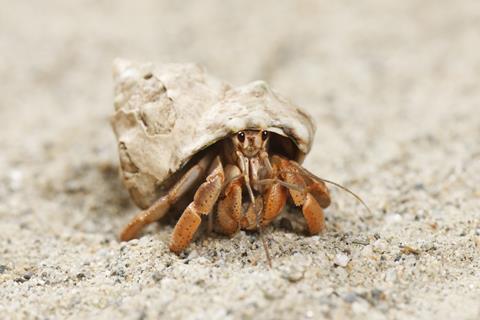 So from strong teeth and bones, through to good tasting beer and ensuring hermit crabs find their perfect home – you can see that calcium really is an essential element.

Well, I'm very at home with my hard water, and the local beer tastes quite good too, although I do get through quite a few kettles – indeed Russell Hobbs probably owe their buoyant share price just down to me. Well, maybe. That was Strathclyde University's Karen Faulds with the story of calcium. Next week, if you were an element which one would you be?

If I had to choose a person to represent gold, then I guess it might be an ambitious young stockbroker, a bit flashy, and not great at forming relationships. For helium – an airy-fairy blonde with a bit of a squeaky voice, but with aspirations to join the nobility. And for boron? Well at first glance a boring, middle-aged accountant, maybe wearing brown corduroys and a tweed jacket. But with an unexpected side to him in his spare time – skydiving, and a member of a highly dubious society that indulges in swapping partners.

And you can get the inside story on boron's swinging antics with Pat Bailey in next week's Chemistry in its element. I'm Chris Smith, thank you for listening and goodbye.