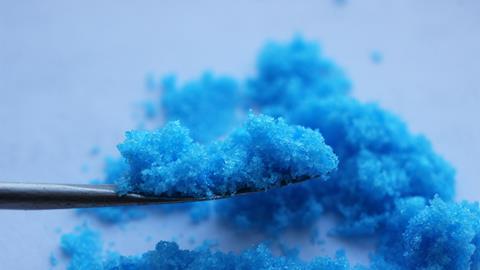 This week an inspirational compound to the young chemists out there. Here's Brian Clegg.

For anyone who was lucky enough to have a chemistry set in their youth, copper sulfate was likely to have had a starring role. It's not that it did the kind of things a teenager wanted from a chemistry set. It didn't make bangs, smells, flashes or smoke. And yet there was something special about it. The set manufacturers probably put it in because it was cheap, relatively harmless and colourful. But copper sulfate has left a lasting impression on many a young chemist. 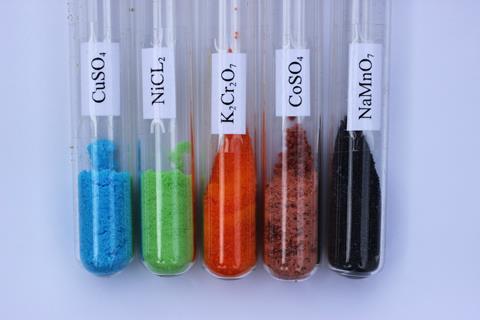 The first fascination has to be that vibrant, exotic blue colour - which is a shame, in a way, because strictly speaking copper sulfate isn't blue at all. Pure, anhydrous copper sulfate, CuSO4, is a pale grey, almost white powder. The richly coloured copper sulfate crystals with which we all are familiar are hydrated, with five water molecules to each copper sulfate molecule in the compound.

We've know about copper sulfate for a long time. The Romans found it in solution in copper mines, calling it chalcanthus. Copper sulfate does crop up as a solid in nature, often crystallised on the walls of mines and caverns. However this isn't a substance that there is any need to mine. It is easy enough to make by reacting more common copper compounds like copper oxide with sulfuric acid.

Going back to those chemistry set days, copper sulfate had tricks up its sleeve both for those of an artistic persuasion and those who had a more industrial turn of mind. For would-be industrialists there was fascination in what happens when you dip a nail into a solution of copper sulfate.

Leave it for a while, draw it out, and an iron nail has a bright coppery metallic sheen from a coating of raw copper. In the solution, the more reactive iron atoms of the nail donate electrons to copper ions. The iron displaces copper from its salt, to make iron sulfate solution and deposit a thin coating of metallic copper on the surface of the metal. Copper is quite an unreactive element, so plenty of metals will perform this trick with copper sulfate - zinc for instance, or aluminium - yet a simple iron nail is perhaps the most satisfying. 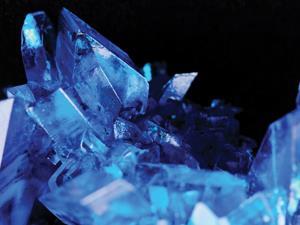 The more arty types would certainly be fascinated by the striking blue crystals that are easy to grow from copper sulfate. Probably the ultimate use of this crystal formation was British artist Roger Hiorns' 2008 work for Artangel, repeated the following year, called Seizure. Hiorns waterproofed a disused council flat at Harper Road in London, then filled it with thousands of litres of copper sulfate solution. Several weeks later the liquid was drained off, leaving all the surfaces in the apartment coated in blue crystals, like a glistening house of gems. This was a rare example of a shortlisted entry for the Turner Prize which the general public found beautiful.

When it is not being played with, copper sulfate has more mundane jobs - in fact it has proved very versatile. It was commonly used as a fungicide, particularly for grapes, where it has proved popular for many years in the so-called Bordeaux mix, where it is combined with calcium oxide or calcium hydroxide, and the Burgundy mix where it is used with sodium carbonate. Despite resistance from the organic movement, which sees copper sulfate as 'natural' and thus safe, it is being used less than it was a decade ago, because of the toxicity of the chemical, which is particularly dangerous to fish.

Even for humans, direct contact with copper sulfate is best avoided (so it may eventually disappear from those chemistry sets). It causes irritation and inflammation on contact with the skin or eyes, and is poisonous if swallowed. But in practice it is unlikely that enough would be accidentally eaten to have a serious effect.

Any reduction in its fungicidal use doesn't mean copper sulfate has no practical applications left, though. The world gets through around 20,000 tonnes a year, of which around three quarters is employed in farming and agriculture. It's not just a fungicide. As well as being used to treat copper deficiencies in animals, its disinfectant properties see it being used in sheep dips and to control foot rot in cattle. 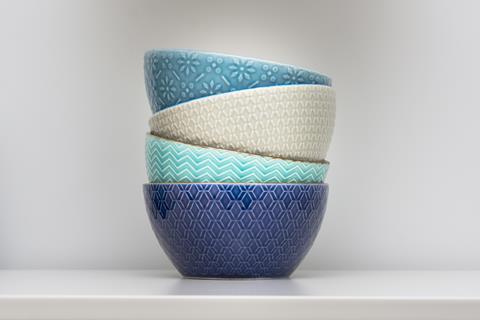 Away from the fields, it finds its way into industrial processes similar to its chemistry set use to coat or etch more reactive metals. It also turns up in some printing processes and makes its way into anti-fouling paints and blue coloured glass and ceramics. Copper sulfate crops up in the leather industry, helping dyes to fix to the leather and taking part in the tanning process. You may even find it in hair dye, and in the bindings of books, where it is added to the glue to make it less attractive to insects.

Copper sulfate is a comfortable teddy bear of a chemical. It is never going to set the world on fire. No industry totally depends on it. Even its main agricultural use as a fungicide is not what it was. But for generations, copper sulfate has formed an essential part of an enjoyable introduction to chemistry - and that can't be a bad thing.

Indeed, inspiring chemists and artists alike. That was Brian Clegg with the colourful and quite versatile chemistry of copper sulfate. Now next week we smile for the camera.

In the late 19th century, anyone wanting to pursue the latest photographic craze had to be able to handle a bewildering array of chemicals to prepare, fix and develop photographic plates. Often, each photographer would mix their solutions to unique recipes, tweaked as their experience grew. But the vital ingredient was something that could change colour when the shutter was opened to record the subtle differences of light and shade in front of the camera.

And to find out just which chemical compound enabled us to document our lives using images, join Phillip Broadwith in next week's Chemistry in its element. Until then, thank you for listening. I'm Meera Senthilingam