The luck of the materials scientist

Professor Simon Billinge holds joint appointments in applied physics and materials science at Columbia University and in condensed matter physics at Brookhaven National Laboratory, both in New York. He was a plenary speaker at a conference held in June 2018 in Liverpool, UK, to celebrate 50 years of synchrotron radiation research in the UK. Clare Sansom interviewed him there 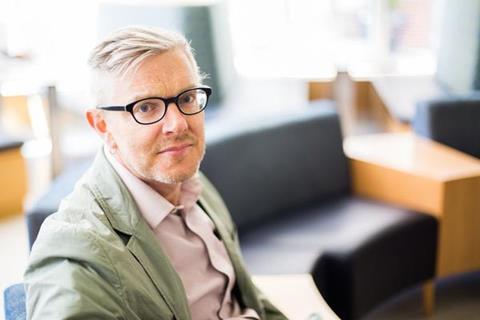 Napoleon is often quoted as having said that he’d rather have lucky generals than good ones. This point was almost certainly not his, but it is a valid one. Those people who grasp all the opportunities presented to them are more likely than others to be both lucky and successful in their chosen careers. This certainly applies to Simon Billinge, whose research over the last 25 years has centred on the relationship between the atomic structures and the properties of novel materials. Many of these – including photovoltaics and pharmaceutical products – are nanomaterials with properties that arise directly from structural components with dimensions on the nanoscale.

Billinge grew up in the UK and studied for his BSc in materials science at the University of Oxford. It was when searching for a PhD position that he had his first significant stroke of luck. ‘I chose to apply to US labs simply out of a sense of adventure,’ he remembers. ‘There were only two that didn’t require students to have a GRE test score from a US college, Case Western Reserve and the University of Pennsylvania, and I chose the University of Pennsylvania at random.’ He arrived there in 1987, just after the discovery of the first high temperature superconductors, and chose to work on these ‘exciting’ new materials under the supervision of Takeshi Egami and Peter Davies. ‘Peter was going to make novel superconductors, and Takeshi to determine their structure–property relationships; my PhD project involved both these aspects,’ says Billinge. As a postdoc in condensed matter physics at Los Alamos National Laboratory, New Mexico, a professor at Michigan State University and since 2008 at Columbia and Brookhaven, he has continued to work on developing techniques to probe patterns of atoms within nanometric clusters and on applying these to increasingly complex, novel material classes. 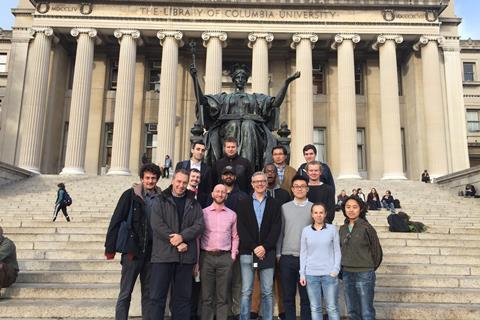 The BIllinge group, at Columbia University, focuses on developing methodologies to determine the structure of materials at the atomic scale to help understand structure-synthesis-property relationships in complex and functional materials

In pure crystalline materials, the pattern that the atoms are arranged in is entirely regular and their distribution can be determined using standard x-ray crystallography. Almost all real materials, however, contain disorder. Diffuse x-ray scattering from disorder within crystals was recognised by Peter Debye, one of the fathers of crystallography, as early as 1915 and expressed mathematically in the Debye scattering equation. This was the origin of the atomic pair distribution function, discovered in the late 1920’s and known, perhaps somewhat confusingly today, as a PDF. Simplistically, this describes the probability that, given there is an atom at point a, another will lie at a given distance from a. It can be derived from x-ray scattering, just as crystal structures can, but the data collection and interpretation are more complex and time consuming. 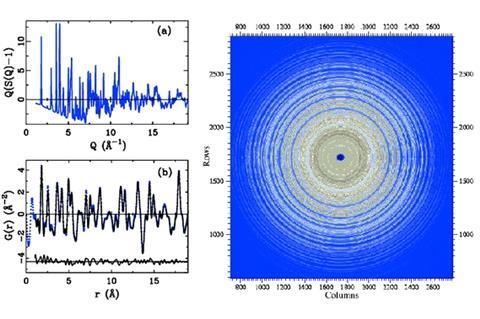 Throughout most of the last century, this technique played an important part in several niche areas of chemical physics and physical chemistry, modelling the structure of liquids and amorphous materials. The big breakthrough came in the early 2000s when increases in the intensity of x-ray radiation sources and the size of detectors sped up data collection; accurate and precise PDFs of disordered materials can now be obtained in a fraction of the time taken only 20 years ago. Billinge’s experience in developing the mathematics involved in interpreting this diffraction has stood his group in good stead to apply the technique to complex materials. Many of these are, in fact, ordered, but only at the smallest scales: they contain tiny, regular groups of atoms or nanocrystals that are too small for conventional crystallography. ‘It is important to study materials at this length-scale, because it is where there is the most complexity,’ says Billinge. ‘The structure of a small molecule is relatively easy to understand, as is the structure of a bulk material like a chunk of silicon. In between, we can find structures of much greater complexity, allowing us in principle to build designer materials with desired properties.’

There is still plenty of methods development to be done, but Billinge’s group is increasingly using these techniques to tackle real world problems, improving the properties of advanced materials by subtly altering their molecular structures. These might be high temperature superconductors, batteries or photovoltaic cells, or, increasingly, pharmaceuticals. Many of the “failed” compounds on drug companies’ shelves are potent and selective inhibitors of their molecular targets but are too insoluble to enter the bloodstream. Reformulating by reducing the particle size can sometimes increase the solubility of a ‘brick dust’-like compound by as much as a thousand times. ‘We need to know the detailed molecular structure of these amorphous and nanosized drugs, so we can bring them to market safely,’ he says.

Billinge’s work is firmly at the interface between disciplines: applied mathematics, physics, materials science and, yes, chemistry. In this field, he believes, communication between researchers with different backgrounds is essential. ‘A mathematician or physicist with a tool, but without an understanding of the chemist’s real world problem, is like a person with a hammer to whom everything looks like a nail. Communicating across disciplines lets us adapt the tool to solve the problem that is actually there,’ he explains. It seems certain that chemists will be finding worthwhile and interesting real world problems for this lucky materials scientist turned applied physicist to solve for many years to come.