Bert Weckhuysen is a distinguished university professor at Utrecht University, the Netherlands, working in the Debye Institute for Nanomaterials Science. He was a plenary speaker at a conference held in June 2018 in Liverpool, UK, to celebrate 50 years of synchrotron radiation research in the UK. Clare Sansom caught up with him there 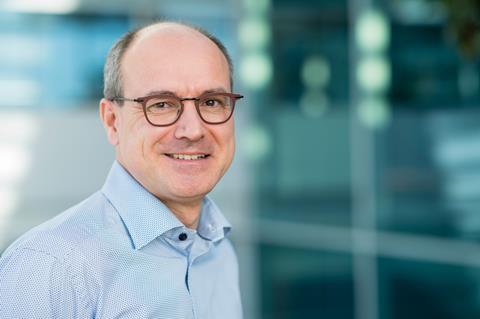 Like thousands of chemists worldwide, Bert Weckhuysen is a keen photographer. More unusually, however, he has found a way to bring his hobby and his research together. For over 15 years he has aimed to understand the mechanisms of catalysis through taking photos and videos of catalysts in action. The long-term aim of this work is to build a unique and powerful ‘camera’ that can image catalysis at macro, meso and micro scales, from the reactor level down to interactions between single atoms and molecules.

Weckhuysen grew up in Belgium and studied for his degrees at Leuven University there. Following postdoctoral studies in the US, with Israel Wachs at Lehigh University in Bethlehem, Pennsylvania and with Jack Lunsford at Texas A&M University, he moved to Utrecht University in 2000 and has stayed there ever since. In 2012 he became the first distinguished professor to be appointed in his faculty, and he was promoted to distinguished university professor in January 2018. At the age of 50 – as he pointed out in his talk in Liverpool, just about the same age as synchrotron radiation-based research – he has over 500 publications in peer-reviewed journals.

Few chemists, however distinguished, have been able to name the technique that they made their own. Together with a few colleagues, Weckhuysen coined the term ‘operando spectroscopy’ in 2003 to refer to the spectroscopic characterisation of materials undergoing catalysis while the reaction is going on and its activity is being measured.1 It is thus a specialised form of in situ spectroscopy, in which measurements take place under catalytic conditions. ‘Operando spectroscopy measures the activity of real catalysts under realistic working conditions of high temperature and pressure,’ he says. ‘The word operando is Latin for working, and operando spectroscopy is the spectroscopy of working catalysts: real materials, in all their complexity and heterogeneity.’ This can involve a wide variety of spectroscopic techniques: infrared, Raman and fluorescence spectroscopy as well as those using synchrotron x-ray radiation. 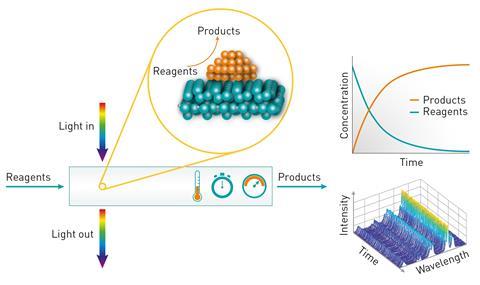 Weckhuysen uses operando spectroscopy to study catalysts as they work

The catalysts that are used in chemical processes in industry today are, indeed, complex and heterogeneous. Catalysis can only occur once substrate molecules have made their way to the active site, often through a complex network of tiny pores. ‘This can seem rather like navigating a city using a street map,’ says Weckhuysen. Watching how this process takes place in real time and under industrial conditions gives chemists and engineers a greater understanding of its mechanism, and how the properties of the catalyst can be changed to make the process more efficient.

Many non-scientists will have come across the term ‘catalyst’ principally via the catalytic converters in their car engines. We now take it for granted that exhaust fumes will contain very little NO2 and other noxious gases; thankfully, the multiple environmental problems that face us no longer include acid rain. Today, Weckhuysen’s group is contributing a detailed understanding of catalysis in all its molecular detail to a problem that in the scorching summer of 2018 begins to seem urgent as well as important: removing, or perhaps recycling, excess carbon dioxide from the atmosphere.

It is already possible to turn some of the carbon dioxide that plants have captured and stored as non-edible biomass into everyday plastics, and cracking catalysts play a crucial part in this process. Weckhuysen believes, however, that even better catalysts might enable us to bypass plants, capture carbon dioxide directly from the air, and use it, with water, as raw materials for producing hydrocarbons like octane. These are liquid at room temperature and are key components of gasoline fuel, but we can also imagine making the current chemical building blocks of our industry directly from carbon dioxide. ‘We are not there yet; this high-energy process will need better catalysts that have not yet been invented,’ he adds. ‘But realistically we are not going to do without liquid fuel completely, and directly recycling carbon dioxide and other waste streams into hydrocarbons would be a sustainable way of making and using them.’ Today, his group is investigating the properties of nickel nanoclusters as catalysts of carbon dioxide hydrogenation. Understanding how to control the activity and selectivity of this process should enable the carbon to be captured and stored in liquid methane.