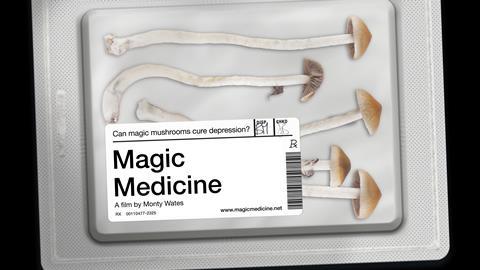 The worst thing someone with depression could do is take psychedelic drugs – or so one might think. But scientist Robin Carhart-Harris from Imperial College London believes that mind-altering substances could actually treat depression, particularly in the 20% of patients for whom other drugs are ineffective. After a three-year legal battle, Carhart-Harris’ team won the rights to conduct the first ever medical feasibility study of psilocybin, the active compound in magic mushrooms.

Monty Wates’s Magic Medicine documents these trials in a feature-length film. Wates focuses on three of the 12 volunteers. For each of these men, depression had a major impact on their life. The fact that their bodies don’t react to common antidepressants has left them disillusioned about ever seeing an improvement in their mental health. During the trials, each of them received two oral doses of psilocybin: a small dose to assess the drugs’ safety and, seven days later, a larger dose to examine its therapeutic potential.

It turns out that the drug had no serious or unexpected adverse effects. Indeed there have been studies showing that psilocybin’s harm potential as an illegal drug is tiny compared with other drugs like heroin and even legal substances such as alcohol and tobacco. At the same time, patients experienced reduced symptoms for up to three months after dosing.

Wates’s film is a quiet, thoughtful piece. I’m glad to say it dodges any sensationalism around the topic of psychedelics. A lot of air time is given to each of the volunteers’ thoughts, hopes and feelings before, during and after the trials. Their honesty and willingness to show viewers what it’s like to live with depression is what makes the film special.

It becomes clear that psilocybin profoundly transformed the volunteers’ lives in the months after the trial. I couldn’t help but agree with a friend who said the film made him angry that these drugs aren’t available to more patients.

What I did miss is a little more information about the science behind psychedelics. Although psilocybin’s mechanisms of action is still not entirely clear, the very brief introduction to brain chemistry wasn’t enough for me. I would have liked to know more about how conventional antidepressants work in the brain and how psilocybin is different. Giving the researchers a little more space would have made for a more complete story.

Having said this, I enjoyed Magic Medicine overall. While the future of psychedelic drugs remains unclear, the film makes a good argument for the urgent need to investigate their potential.