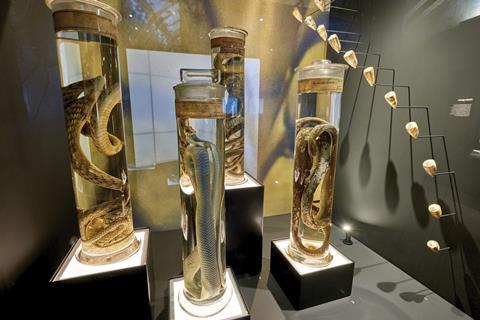 Most people have been envenomed at some point. If you’re in the UK it’s probably only been as bad as a bee or wasp sting, but not everyone is so lucky. Worldwide, venoms kill 100,000 people every year. A visit to the Natural History Museum’s Venom: killer or cure exhibition left me very glad I live in a part of the world where the wildlife is relatively benign.

The first part looks at the diversity of venoms and venomous creatures found in nature, many of which I was familiar with. But there were some surprises. I was unaware, for example, that the slow loris – known internet-wide for its cuteness – has venomous elbows. Or that the Iberian ribbed newt defends itself by pushing its venom-coated ribs out through its skin.

The exhibition also touches on a question that is harder to answer than you might think: what is the deadliest venomous creature of them all? A hall of fame takes you through the contenders.

Maybe it’s the virtually invisible box jellyfish, known to swimmers off the coast of Australia for its agonisingly painful stings. Touch enough tentacles and you’re a goner, even with an antivenom. Or the coastal taipan snake (also Australian) whose venom is among the most potent – just 100mg purified would be enough to kill 55 people. In terms of absolute death toll, however, the humble Anopheles mosquito is a clear winner. Though not deadly in itself, its venom numbs the pain of a bite and allows it to stealthily feed on the blood of unsuspecting humans. This transmits the malaria parasite from person to person, resulting in hundreds of thousands of deaths each year.

After hammering home the huge destruction venoms cause, the exhibition moves on to explore how their powers are being harnessed in medicine, from the painkilling properties of neurotoxic venoms, to the blockbuster diabetes drug exenatide, developed from a protein found in the gila monster’s venomous saliva. Even face creams containing bee venom – which supposedly stimulates skin healing by mimicking a light sting – have made their way to market.

The space itself is well organised with a good balance between information, entertainment and art. It makes use of multimedia displays as well as artefacts behind glass, and there is plenty to explore.

For those not keen on snakes or spiders, a word of warning: there are an awful lot of pickled specimens in jars. And just after entering, I was greeted by a certain furry, eight-legged exhibit that was very much alive, though thankfully not on the loose.