Snake extract used to speed up haemostasis in new bioadhesive

A gel that stops bleeding and sticks tissue together has been made using reptilase, an enzyme extracted from the venom of a pit viper. Visible light activates the bioadhesive, which also reduces bleeding by promoting blood clotting. 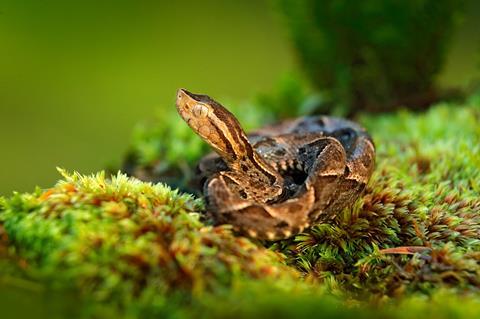 The snake Bothrops atrox is also known as the common lancehead. Its venom contains an enzyme that converts fibrinogen to fibrin

Bioadhesives use chemical bonds or physical interactions between themselves and tissue to heal wounds. It’s important to prevent blood leakage when using bioadhesives as blood weakens these vital interactions and reduces the adhesive strength.

Reptilase in the venom of Bothrops atrox converts fibrinogen into fibrin, part of the usual blood clotting mechanism. The venom is toxic because it causes so much blood clotting that victims eventually run out of clotting factors, which causes them to haemorrhage. Now, a research group from universities across China and Canada has used the blood clotting properties of reptilase in a controlled manner to produce a bioadhesive that seals wounds whilst accelerating haemostasis.

The modified hydrogel was tested on a liver wound, achieving complete haemostasis in an average of 0.75 minutes, compared to 1.32 minutes with gelatin methacryloyl alone. Further tests also showed that its adhesive strength improved.

The results of the study suggest that this haemostatic bioadhesive could be suitable for arterial injuries, as well as other internal injuries where it is difficult to perform surgery.