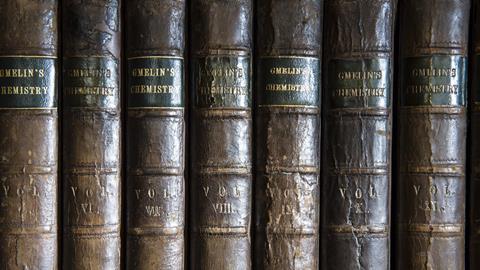 In 1817 a newly appointed German professor started a quiet revolution in scientific publishing. When the first volume of Leopold Gmelin’s Handbuch appeared, the world of chemistry began to change. Today his brainchild still survives, sustained by a technological infrastructure he could scarcely have imagined. To see his story in perspective, however, we need to look back a little further.

Before the coming of literacy (and for long afterwards) instructions for making useful substances like metals, medicines, cosmetics and ceramics were transmitted orally from practitioners to apprentices. Eventually, some recipes got preserved – on papyrus rolls in Egypt, on clay tablets in Mesopotamia or on rag paper in China – and even though their most valuable secrets were sometimes wrapped in mystical metaphors which only the initiated could decode, these manuscript guides were frequently copied and widely circulated.

The European print revolution of the late 1400s did not immediately displace such texts, but the new medium grew more significant after the publication of Vannoccio Biringuccio’s De la pirotechnia in 1540. Like Leonardo da Vinci, Biringuccio was a multi-skilled Italian Renaissance artisan. But while Leonardo’s manuscripts remained unpublished for centuries, Biringuccio’s heirs converted his working notes into a printed manual which demystified many useful techniques, from casting church bells to manufacturing gunpowder. Its success revealed the existence of a new niche in the publishing world, and other books of this type soon followed.

A different style of technical publication emerged in the 17th century, as learned bodies like London’s Royal Society sought to connect manufacturing processes with contemporary scientific theory. And in the 18th century, more academic books on applied chemistry began to appear as universities developed courses in this area – some linked with medicine, like Herman Boerhaave’s at Leyden in the Netherlands, others more focussed on mineralogy, like Torben Bergman’s at Uppsala in Sweden. But although textbooks kept students and practitioners aware of recent chemical discoveries, their proliferation could spread confusion. Well into the 19th century, there was no consensus on the naming of chemical substances comparable with that established by the Linnaean classification system for plants and animals. 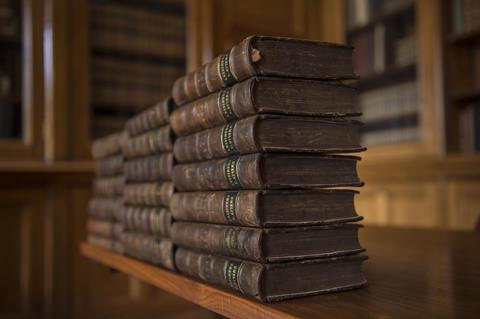 The increase in the number of known substances during this period encouraged several authors to compile chemical dictionaries. The first was probably Pierre-Joseph Macquer’s, published in French in 1766 and translated into English by James Keir in 1767. Keir’s own Dictionary appeared in 1789, and William Nicholson produced a rival work in 1795, with revised editions following until 1853. Nevertheless, an ever-rolling stream of fresh discoveries kept making such reference works obsolete.

One response to this fluid situation came from Sweden’s Jakob Berzelius. From 1822 to 1841 his Arsberättelse om Frangstegen i Physik och Chemie (Annual Report on the Progress of Physics and Chemistry), published in Swedish, French and German, provided helpful updates for Europe’s scientists. But Berzelius was an aggressive controversialist who disparaged – often in provocative language – theories that clashed with his own. Furthermore, his system of chemical formulae did not always fit comfortably with the discoveries being made by his younger contemporaries, and consequently his reports grew less influential in his later years. In this confusing environment, Leopold Gmelin’s Handbuch became widely recognised as a valuable addition to the literature. An obituary notice in the London Chemical Society’s Quarterly Journal in 1855 explains why: ‘Other writers on Chemistry have indeed arranged large quantities of material in systematic order; but for completeness and fidelity of collation, and consecutiveness of arrangement, Gmelin’s “Handbook” is unrivalled.’

This comprehensive grasp of his subject-matter was part of Gmelin’s heritage. His family had a long and distinguished history of involvement in chemistry, pharmacy and medicine. The dynasty began with Johann Georg Gmelin (c.1674–1728), an apothecary in the German city of Tübingen. One of his sons – also Johann Georg (1709–1755) – taught chemistry in Russia before returning to the University of Tübingen as professor of medicine in 1745.

After Johann Georg the younger’s death, the medical chair at Tübingen passed to his brother, Philip Friedrich (1721–1768), who also taught chemistry and botany there. Philip’s son, Johann Friedrich (1748–1804) became an associate professor of medicine at Tübingen in 1772, but moved to Göttingen University three years later. In 1780 he won promotion to full professor (of both medicine and chemistry) at Göttingen, and his son Leopold was born there in 1788.

After graduating from the Göttingen Gymnasium (high-school) in 1804, Leopold spent several months working in the family pharmacy in Tübingen, while also attending some university lectures. Having gained a bachelor’s degree from the University of Göttingen in 1809, he returned to Tübingen and began a study of the chemistry of animal pigments which he pursued further in Vienna. In 1812 a dissertation based on this research gained him a doctorate at Göttingen, despite his prolonged absence from the city (probably necessitated by his involvement in a duel there). 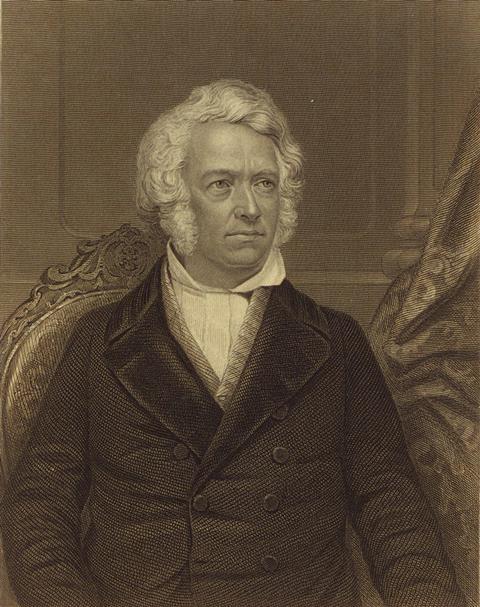 Leopold Gmelin came from a family of chemists

In 1813 Leopold undertook a lengthy research trip to Italy, making numerous geological observations which he later published. Shortly after returning to Germany he visited Heidelberg University and was invited to give some lectures. This experience helped to get him accepted as a privatdozent (a licensed but unsalaried tutor) there, and in 1814 he became an associate professor in the medical faculty. The appointment did not inhibit his pursuit of further research experience. In the company of his cousin, Christian Gottlob Gmelin, Leopold visited Paris during the winter of 1814–15. There they both worked in Louis Vauquelin’s laboratory and met leading French chemists, including Joseph Gay-Lussac and Louis Thenard.

In the spring of 1815, Leopold returned to Heidelberg as director of the university’s chemical institute – then still a sub-division of its medical faculty. His facilities for research there were limited, but nevertheless he declined an invitation to succeed Martin Klaproth as professor of chemistry at the University of Berlin in 1817. Soon afterwards Leopold’s loyalty to Heidelberg earned him promotion to full professor (of both chemistry and medicine), and the promise of a new chemical laboratory. However, he may also have had personal reasons for staying.

In 1816 Leopold had married Louise Maurer, the daughter of a local pastor. Louise’s desire to remain close to her extended family probably influenced Leopold’s decision to remain in Heidelberg, and despite further invitations he continued working there until his retirement in 1851. Gmelin was highly regarded as a teacher, and for many years he also pursued a busy programme of research. Under his leadership Heidelberg’s chemistry faculty flourished, and at the close of his career he secured its future by recruiting Robert Bunsen as his successor. He died in 1853, following a series of strokes.

Gmelin’s publications covered many topics, from investigations into the chemistry of digestion to the analysis of obscure minerals. Among the numerous substances which he was the first to identify were taurine (C2H7NO3S), and potassium ferricyanide (K3Fe(CN)6), and he also introduced several new terms – including ‘ester’ and ‘ketone’ – into the chemist’s vocabulary. Although none of his discoveries initiated a paradigm shift, the Handbuch established his status as one of the creators of modern chemistry.

The first edition of Gmelin’s master-work appeared between 1817 and 1819, under the title Handbuch der theoretischen Chemie. Two volumes covered inorganic chemistry, with a third devoted to organic substances – though by the third edition (1827–9) the rapid development of organic chemistry had made it necessary to reverse these proportions. Throughout the rest of his life, Gmelin was involved in revising and updating this work.

Chemistry underwent several theoretical upheavals during Gmelin’s professional lifetime, and leading figures in the subject frequently criticised each other’s ideas in highly intemperate language. But throughout these conflicts, Gmelin’s book was widely accepted as an authoritative guide for students and advanced researchers. Several factors probably contributed to its remarkable success.

Firstly, the Handbuch was factually comprehensive. It attempted to cover all the known elements and compounds and their most significant properties – insofar as this was possible in an era when discoveries occurred frequently and book production was slow. Secondly, Gmelin did his best to avoid becoming involved in the controversies which generated so much ill-feeling among contemporary chemists. The obituary cited above states that he assembled ‘in a purely objective view, and on the authority of several investigators, all that has been observed within the domain of chemistry – not, indeed, withholding his own opinions, but placing them side by side with those of others, and never suppressing the latter’.

The third ace in Gmelin’s hand was the fact that his book was systematically organised, with all its data supported by citations of original sources. The foundation of this enterprise was a continually updated card index, the remote precursor of today’s electronic Gmelin database. The card index was not a novel concept – it had been pioneered by the Swedish taxonomist Linneaus in the 1700s – but Gmelin made particularly effective use of it. The special pleasure he took in deleting spurious entries greatly amused his fellow chemists – after hearing in 1829 that two supposedly distinct substances were in fact chemically identical, Friedrich Wöhler joked to Justus von Liebig that Gmelin would now be exclaiming ‘Gott sei Dank, dass es eine Säure weniger giebt.’ (Thank God, there is one acid less!)

Taking up the mantle

The fourth edition of Gmelin’s great work – by then simply titled Handbuch der Chemie – began appearing in 1843. [Figure 4] Gmelin supervised the production of its first four volumes, but after his health declined the fifth (published 1852) was completed from his notes by his associates Karl List and Karl Kraut. Kraut added further supplementary volumes to this edition until 1870, while simultaneously preparing a fifth edition (on which Gmelin had been working until shortly before his death). 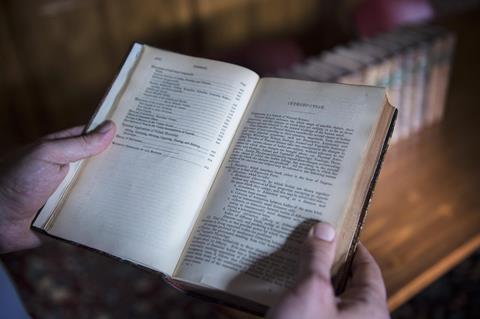 Chemists down the years have thumbed his handbook for information, but now they point their computer mouses to digital versions

This and all subsequent editions of the Handbook covered only inorganic (and organo-metallic) chemistry. The resulting gap was filled by Friedrich Beilstein (1838–1906), who launched a parallel handbook of organic substances in 1881, revised editions of which continued to appear long after his death. The authoritative status of both works was confirmed when the Deutsche Chemische Gesellschaft (German Chemical Society) took responsibility for overseeing their publication in the early 20th century.

In the 1920s, the continual updating of these handbooks was delegated to the Gmelin and Beilstein institutes – both subdivisions of the Kaiser Wilhelm Institute for the Promotion of the Sciences, founded in 1911. The German chemist Erich Pietsch joined the Gmelin editorial team in 1925, became editor-in-chief in 1936, and remained in charge when the Kaiser Wilhelm Institute was dissolved in 1946. The Gmelin Institute then became a subdivision of the newly-founded Max Planck Institute.

In the 1950s Pietsch and his team steered the Gmelin project into a new era of data retrieval, using machine-sorting of punched cards to answer queries sent in by teletype. By then, however, it was already apparent that such operations would eventually be handled by electronic computers. In the early 1970s Margot Becke-Goehring (a former professor of chemistry at Heidelberg who became director of the Gmelin Institute in 1969) negotiated an agreement between the Institute and the Springer-Verlag publishing corporation which would eventually take the Handbook into the digital age.

Meanwhile, significant changes were under way in the ever-expanding print edition of the Handbook. Since 1958 the table of contents and section headings had been printed in English as well as German, but from the early 1980s the full text of all new volumes was in English. In 1997 an electronic Gmelin database became commercially available, and since 2009 this facility (along with the Beilstein database and much else besides) has been accessible online via Elsevier’s Reaxys chemical information system. However, the online Gmelin does not yet include many items (particularly diagrams and tables) from the pre-1975 print editions, and consequently some university libraries still keep several hundred of these volumes available for reference. The Handbook’s continuing utility, two centuries after its first appearance, is a worthy memorial to the diligence of its originator.

Mike Sutton is a historian of science based in Newcastle, UK