In space and Antarctica, planning and running research projects transcends national borders. Laura Howes finds out how this affects the way researchers operate

In space and Antarctica, planning and running research projects transcends national borders. Laura Howes finds out how this affects the way researchers operate

Science has always been an international activity, sparking collaborations and rivalries across borders. But while most labs these days have an international flavour, some science is performed in truly international arenas. Both Antarctica and the International Space Station (ISS) host scientific experiments throughout the year.

The isolated continent of Antarctica has captured the imagination since before Robert Falcon Scott’s ill-fated expedition of 1910-12. Since 1961, with the signing of the Antarctic Treaty, all land and ice shelves beyond 60?S have been set aside for peaceful purposes and scientific investigations. Several nations claim territorial sovereignty over the continent, but no new claims can be made while the treaty is in force. With no permanent citizens or government, the 14 million square kilometres are preserved as an area of international ownership.

In the summer season, which runs from October to March, over 4000 people will be resident across the many research stations or camps based in Antarctica. But in the winter that number falls to just over 1000 scientists and support staff, who keep the stations and experiments running. In the summer, with 24 hour daylight, shift work becomes easier, and after your shift you can ski or fly kites and lose track of time. But in the perpetual darkness of the winter months, when temperatures can fall below -80?C, there’s less you can do. 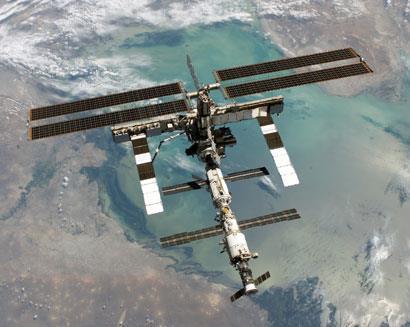 One of the things you can do in the eternal night time is take photos of the stars and aurora australis or southern lights. Gazing up at night you might see the ISS move across the skies. The international laboratory has now hosted humans continuously since October 2000, but is still not complete, with at least one more module scheduled to be launched.

In space, the Treaty on Principles Governing the Activities of States in the Exploration and Use of Outer Space, including the Moon and Other Celestial Bodies, maintains that outer space and celestial bodies cannot be claimed by any country. However, objects launched into space remain within the jurisdiction of their state of origin, much like individual research stations on Antarctica come under the authority of the country that maintains them. On the ISS - which is a joint project between several space agencies - each module is owned by just one of the partner agencies, but equipment and crew time is split between the agencies by previously agreed amounts.

So how and why do science in such hostile places? How does it work, what unique challenges exist when performing science in Antarctica and on the International Space Station and can we learn anything from scientists’ experiences of working at these extremes? 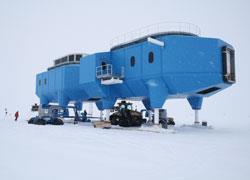 Antarctic research stations get one supply ship a year, so planning is crucial to success

If you’re planning an experiment at one of the Antarctic research stations, you can’t just open a catalogue and order new kit to be delivered. ’You can’t afford to just have a bright idea and put it on the ship, it doesn’t work like that,’ says Caroline Lewis from the British Antarctic Survey (BAS). Lewis is logistics coordinator for BAS’s Halley Research Station. Halley gets one ship a year, which delivers supplies for the summer season in November. ’We have to work out what we want to achieve, what we need to make things happen and go out and get it all on the ship for October,’ says Lewis. That means ordering equipment at least a year in advance, sometimes longer.

But if the equipment ordering is done early, the experiments are planned even further in advance. ’I can tell you where I’m drilling in 2015 already,’ explains Robert Mulvaney, an ice core chemist at BAS. Mulvaney drills for ice cores in some of the most inaccessible parts of the continent. But it’s not just the supply chain that necessitates such forward planning, he adds, ’people are quite important as well. You need people who know what they’re doing, and are available and aren’t about to lose their marriage over it.’

Mulvaney’s team will be gone for four months, and when they’re out on the ice it’s no picnic. Although he operates out of a station, Mulvaney and his team will actually camp out with their equipment, miles from anywhere. Working four hours on, four hours off for 16 hours a day, six and a half days a week. ’You’ve got to do it like that to get it all done, because there’s a limited window you can be out there,’ he says. 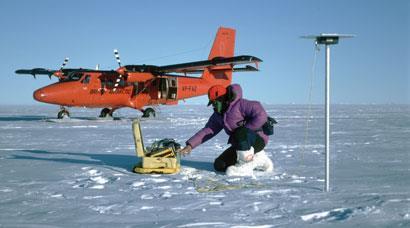 Once the ice cores are drilled, they are brought back to the UK and stored in Peterborough. Drilling might take several years - packing away the equipment at the end of each season and starting up again the following November. ’Once we’ve got the ice we never really use it all,’ explains Mulvaney, who is still analysing cores from expeditions 10 years ago and further back. The tiny bubbles of trapped gas in the ice cores give snapshots of the atmosphere in the past, and isotope ratios of oxygen in the ice correlate to the climate at the time. 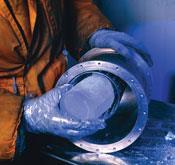 As well as a record of the past, this can help climate modellers now. The ice cores have shown how greenhouse gas concentrations and temperatures are correlated. ’We have to keep the theoreticians in check,’ laughs glaciologist Bob Thomas.

Thomas started at the forerunner of BAS, the Falkland Islands Dependencies Survey (FIDS), in the 1960s. Back then, Thomas describes FIDS as a small operation that left him alone with simple equipment and primitive conditions. ’We had complete freedom because the communications were so bad that no-one could micromanage us,’ he points out. Thomas could just decide where to drill and go there, something that’s still quite noticeable about BAS. Small groups heading out and investigating what they want to have a look at - although the logistics and planning are now more involved, the spirit seems to be the same.

But different organisations do things in different ways. When Thomas moved to the US to continue his research in the 1970s, he found the organisation quite different. Funded by the National Science Foundation (NSF), projects were much bigger with larger bases and lots of planes so that much larger camps could be set up, with better equipment. The large projects, several based at each camp, increased collaboration, but also meant that some independence was lost. Sitting on the ice for a month waiting for an aeroplane that’s also being used elsewhere can ruin a season. And as collaborations have got bigger and more international, planning becomes longer and more involved.

From conceiving an experiment to actually performing it, the process to get your science into space can be even longer than for the large collaborations in the Antarctic. ’For the physical sciences it’s an arduous process to get to the space station,’ explains Francis Chiaramonte, Nasa program executive for physical sciences in the ISS. Each experiment is built from scratch in consultation with engineers and can take around five years from conception to being ready to fly. And even then, you could be waiting: ’Even when you’re in the process and you’re really far down the end of the line and Nasa says, "Well, you’re being launched in April," that’s still no guarantee you’ll be in orbit in May - because then you’re blended into a large selection of experiments competing for that precious crew time. Basically everybody has to wait their turn.’ 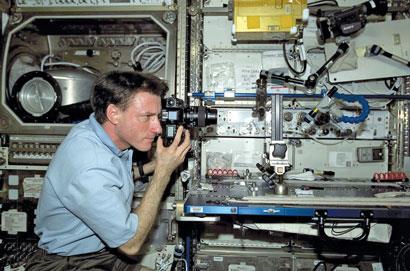 On the ISS, astronauts photograph experiments for researchers on the ground

So what does it take to send an experiment into space? A lot of waiting and a lot of consultation. Once a proposal is accepted, the engineers have to build and test every prototype of the equipment needed. Your experiment has to be compatible with the power and size constraints imposed by the microgravity science glovebox that your experiment will be housed in, ’your box has to fit with their box,’ as Chiaramonte puts it.

’There are all these constraints,’ admits David Weitz, who sends up materials like colloids to see how they are affected by microgravity. ’But you work with it, and then you push back.’ He also has a tip for making sure that what you submit in your proposal is still interesting to you years down the line. Keep the exact details vague: ’Nasa builds the equipment and then when it comes to the launch we put what we think is the most exciting thing in.’

Eventually though, you have to let your experiments go. Experiments can be run remotely on the ISS from labs on Earth, but most experiments involve handing over control. As Weitz notes, ’the astronauts in the end are the ones that are doing your experiments.’ Working with the astronauts, and getting them enthused about the work has been the job of one of Weitz’s postdocs and it’s now more of a collaboration between his group and the crew on the ISS. Weitz also gets very quick results, because he can receive pictures from the ISS. Others have to be more patient.

Pascale Ehrenfreund of the University of Leiden in the Netherlands has just had some samples back that she hasn’t yet had a chance to open. Ehrenfreund sends up organic molecules to see how they react to the radiation and UV from space and the latest results will take a long time to analyse. ’It’s exciting to send something to space, but the method is equally rigorous as on Earth, if not more so,’ she explains.

’You never know what happens to your samples when they leave your sight,’ Ehrenfreund adds, which is one of the reasons she does so many control experiments. She recalls how she watched the spacewalk that mounted her experiment in 2009 with her student. ’That was quite fascinating, the astronauts were so professional and that gives you a good feeling.’ Keeping in touch, though, can lead to some interesting developments. For Weitz, his good relationship with the astronauts now means he occasionally receives phone calls direct from the space station. ’That’s to the credit of my postdoc, who’s very good at interacting with the astronauts, so they ask him questions when they need to.’

At BAS less is run remotely, but some atmospheric measurements are continued over the winter, and they need to be maintained. For BAS then, the advent of email and internet phone services like Skype has been amazingly useful for maintaining contact with disparate teams. ’They are our main means of keeping in touch now, and we try to remember if we’re planning things to forward the information to the guys on station as well,’ says Lewis. ’You want the winter team to know roughly what’s going on so that they can help.’

More challenges remain for both the ISS and Antarctica. For the ISS, the decommissioning of Nasa’s space shuttles will lead to new requirements, as Russian craft take over the remaining transport missions. And the ISS itself is currently only actually scheduled to remain a permanent laboratory in the sky until 2020. In the Antarctic, as the snow buries former stations, new ones have to be established.

But such a lot of science has already been performed at these international extremes, whether it’s to understand the origin of life on Earth or to monitor how we are endangering it. Although the constraints may be different and the planning perhaps more involved, it’s just like science anywhere else. There are big collaborations and small teams doing work everywhere, it’s just that the international arena amplifies this diversity.