Paul Brack won the 2014–15 Chemistry World science communication competition with this article. Find out more about this year’s competition

200 years ago, chemist and inventor Sir Humphry Davy went to the ruins of Titus’ baths in Rome. There, ‘amongst some rubbish, [he] found several large lumps of a deep blue frit’.1 Soon after, Davy found the same material on a pot in Pompeii. He realised that he had rediscovered the material ‘of which the manufacture is said to have been anciently established at Alexandria’, the first synthetic pigment, Egyptian blue. The tale of Egyptian blue’s discovery, ‘disappearance’ and rediscovery is a fascinating one, and illustrates beautifully how art can act as a facilitator for the advancement of chemistry. 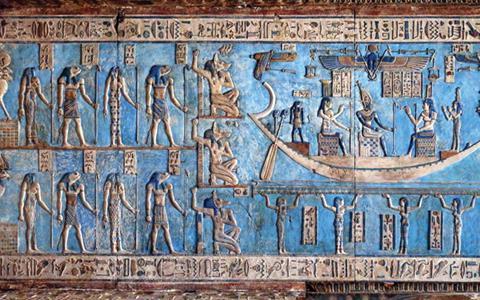 The blue pigment was first used by Egyptian artist 2600 BC. Today it has possible uses in security inks or for biomedical

Let’s start at the beginning. For the ancient Egyptians, blue was a very important colour. It was associated with the sky and the river Nile, and thus came to represent the universe, creation and fertility. However, in ancient times, only the earth colours (colours provided by the surface soil) were used as pigments – blue could not be easily obtained by Egyptian artists. Indeed, the only natural source of blue was the rare and expensive mineral lapis lazuli, which was mined in what is now Afghanistan.

However, at around 2600 BC, Egyptian blue enters the historical record, and use of the pigment gradually spread across the ancient world as far as Mesopotamia and the Roman empire before being apparently lost in the dark ages. Sadly no Egyptian recipe for the pigment remains, but Vitruvius, a Roman writer in the 1st century BC, stated that sand, copper (from a mineral such as azurite or malachite) and natron (a naturally occurring mixture of sodium compounds, including sodium carbonate) were the ingredients. Modern experiments show that Egyptian blue (chemical formula: CaCuSi4O10) can be obtained by heating these chemicals to 800–900°C with the addition of lime, a calcium-containing material, which must have been present in the ancient method, probably as an impurity in the sand.2

Whether its discovery came about by design or chance, the synthesis of Egyptian blue was a seriously impressive accomplishment. Achieving the necessary temperature control for a successful reaction would have been a major challenge, as indeed would the correct addition of oxygen. Another testament to the skill of Egyptian chemists is the consistency of the pigment throughout history. The composition in artworks such as the mastaba (or tombs) of Mereruka, from the Old Kingdom (~2600–2100 BC), is almost exactly the same as that found in a mummy coffin dating from the Greco-Roman period (~330 BC–AD 400), and there are other examples dated between these two that show similar compositions.

In an exciting development for chemists and artists, it was reported in 2009 that Egyptian blue shows exceptional luminescence in the near-infrared region.3 This means that the pigment can be easily detected in a completely non-destructive fashion simply by illuminating ancient works of art with near-infrared radiation. The luminescence is so strong that the presence of minute amounts of Egyptian blue can be detected even when no blue colour is visible to the naked eye. The British Museum was able to use this technique to provide the first proof that the Elgin Marbles had once been painted, finding the pigment on several sculptures from the Parthenon.

This technique has also been used to detect Egyptian blue in works of art dating to time periods when it was thought the ability to synthesise the pigment had been lost. For example, a group of Danish scientists found Egyptian blue in a painting by the Italian artist Giovanni Battista Benvenuto dating from 1524.4 Understanding how Benvenuto managed to come across a pigment, whose method of manufacture had been ‘lost’ for so long, is a matter for art historians but chemistry has provided them with a tantalising challenge.

Though this property of luminescence was initially exploited by those interested in the history of art, chemists are now realising that Egyptian blue could have other important applications. For example, the long luminescence lifetime and the greater penetration depth in human tissue of infrared compared to UV or visible photons raises the possibility of obtaining more detailed and highly resolved biomedical images by using the pigment as an imaging agent. Egyptian blue also represents an attractive alternative to the expensive lanthanide compounds currently used in security inks.

Artists’ desire to have a more readily available pigment than lapis lazuli led ancient chemists to produce Egyptian blue. Since its rediscovery 200 years ago, the compound’s chemistry has primarily been studied with respect to its uses in art. However, the discovery that Egyptian blue shows strong near-infrared luminescence, initially taken advantage of for its applications in art history, has opened the way for chemists to exploit its properties in ways its original discoverers could never have imagined.