Chemistry in the face of belief

Far from putting the debate to rest, the dating of the Turin Shroud merely fuelled the controversy, as Richard Corfield discovers 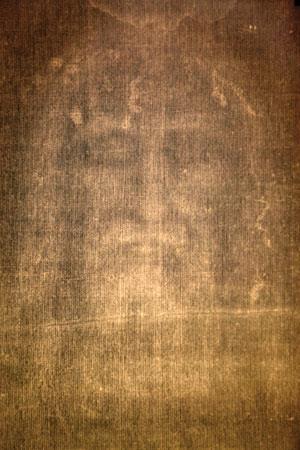 25 years ago, in the spring of 1989, one of the most important papers in the science of archaeometry · the scientific study of archaeological relics – was published. The Turin Shroud, supposedly the burial cloth that had wrapped the body of Jesus Christ after his crucifixion, was subjected to accelerator mass spectrometer (AMS) carbon-14 dating. The result – from three different laboratories – indicated that it did not date from the time of the death of Christ but rather from between AD 1260 and 1390, the early medieval period.

That should have been the end of the matter, but such is the intensity of emotion surrounding the Shroud that the results were disputed almost immediately. It was claimed that it had not been the original material of the cloth that had been dated – that a later patch had been sampled by accident or that the radiocarbon age had been reset by external agents ranging from 16th century fire damage to biofilms on the threads that imparted a spuriously young age to the relic.

The Shroud is one of the most important relics in the Christian church and almost from the moment that Willard Libby invented the radiocarbon dating technique in the 1940s, the Shroud has been an obvious and high profile candidate for measurement. The problem in those days was that carbon-14 is present in such low abundance that for many years very large sample sizes (handkerchief size or larger) would have been required for a measurement to be made. And removing – and destroying – such a large sample would never have been permitted.

The subsequent development of AMS radiocarbon dating meant that smaller samples (of about 50mg weight) could be measured. An added benefit was that the technique became more sensitive, with its potential time range almost doubling from 50,000 to 100,000 years. A sample that could not, by definition, be more than two thousand years old should be easy to date.

The Turin Shroud tests were complicated to organise. The politics of the Catholic church meant that extreme sensitivity had to be used in getting permission to sample in the first place and even more so when deciding from where on the Shroud the sample was to be taken.

In the end, three laboratories were chosen to perform the measurement. Oxford University in the UK, the University of Arizona in the US and the Swiss Federal University in Zurich all had the equipment and expertise that were needed, and successfully won the tender. Rupert Housley was then senior archaeologist at the Oxford AMS facility. ‘The reason why three laboratories were doing the dating was because they wanted an international comparison,’ he explains. 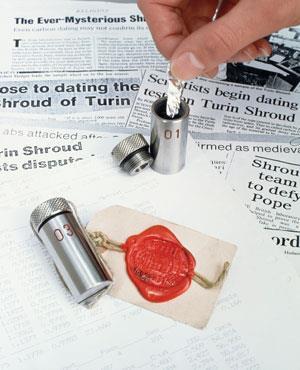 The sampling was done under the stringent supervision of Mike Tite of the British Museum. One area of the Shroud, selected because it was obvious that it was not a later repair but the original fabric, was sampled by two Italian textile experts in the presence of Tite and Anastasio Ballestrero – a cardinal and the archbishop of Turin. After the samples were taken, they – and the two control samples that had been selected from other, unrelated, ancient fabrics – were taken into an adjoining room where they were sealed into metal ampoules labelled only A, B and C. The samples were then passed to representatives from the three laboratories who took them back for analysis.

Never in the history of radiocarbon dating were samples treated with such care. The whole of the radiocarbon community knew that the eyes of the world would be upon them. All three labs had the latest tandem radiocarbon accelerators and Oxford’s entire machine was stripped down, cleaned, tested and calibrated with precisely known standards before Teddy Hall (the head of the lab) and Robert Hedges (the lab’s chief scientist) would think about measuring even a sub-sample of the precious material. The scientific atmosphere in Oxford that early summer of 1988 was electric, but the lab’s hatches were sealed so tight it was all you could do to get a member of staff to even admit the existence of Turin Shroud samples in the city.

After the measurements were made, the media lid became hermetic and the silence deafening. And then in February 1989, the results were published in Nature after painstaking statistical work by Tite.1 The results were unequivocal. The mean age of the Turin Shroud is 664 +/- 33 years (made between AD 1260 and 1390 with 95% confidence). The Turin Shroud was not the burial cloth of Jesus of Nazareth.

It was the result which held the least surprises. After all, the Shroud had first appeared in the historical record around the 14th century and as Philip Ball, a journalist who has long followed the Shroud story, points out ‘At that time it is very clear that there was a thriving mediaeval trade in relics and fakes.’ 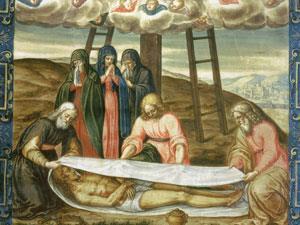 The Turin Shroud is believed by some to have covered Jesus’ body after the crucifixion, but carbon-dating suggests otherwise

Housley agrees: ‘Around that general time (the 14th century) there was a big market for religious icons and relics simply because they would pull in lots of pilgrims and generate a lot of local income. Religious centres such as cathedrals liked to have relics and reliquaries on site for this reason alone.’

But, predictably, it was not long before the radiocarbon dates were being disputed. The reasons ranged from the plausible to the fatuous to the insulting. The last being suggestions that the scientists in charge had swapped samples in between sampling and measurement. In fact no such chicanery was possible since the characteristic herringbone weave of the Shroud clearly identified it to all the scientists in the three labs as soon as the ampoules were opened.

Of the credible hypotheses, one centred on the possibility that the radiocarbon age of the Shroud had been altered by the fact that it was exposed to high temperatures during a fire in 1532. In 1996, a team of Russian investigators claimed to have established experimentally that heating a linen cloth in a humid atmosphere rich in carbon monoxide and carbon dioxide increases the concentration of both carbon-13 and carbon-14 in the cloth. They argued that the fire of 1532 increased the concentration of carbon-14 in the cloth sufficiently to change the date from its ‘real’ date of the first century to an ‘apparent’ date in the 14th century. In fact, since it was known that the Shroud had been subject to heating in its past, even before the radiocarbon measurements were made, tests were carried out to assess the effect of heating on its carbon-14 age. The answer, all three laboratories concurred, was that there was none.

Christopher Ramsey, the current head of the Oxford AMS lab and, like Housley, an author on the original 1989 paper, confirmed that he has looked into the matter as well. ‘The very ingenious argument of reacting carbon monoxide with carbon dioxide in the atmosphere at least has the advantage that it is physically capable of resulting in enriched carbon-14. If there is a plausible mechanism then it is always worth investigating, which I did. But I am afraid the tests went nowhere. There is no indication that there is any reaction between carbon monoxide and carbon dioxide in heated environments.’

Another plausible hypothesis involves the possibility that textile fibres can gain a coat of biofilm over the years – that is bacterial material that obviously contains carbon-14 of a much younger age than the host material. This too can be discounted because calculations have shown that the amount of biofilm required to change a radiocarbon date by 1300 years would have to have been larger than the size of the original sample.

Even today, the radiocarbon age of the Turin Shroud is still being challenged. In 2013, a new study by Giulio Fanti of the University of Padua in Italy used spectroscopic methods2 to test samples of the Shroud taken in the 1970s. Fanti’s results date the Shroud to between 300 BC and AD 400:  a 700-year interval that nevertheless brackets the death of Christ. 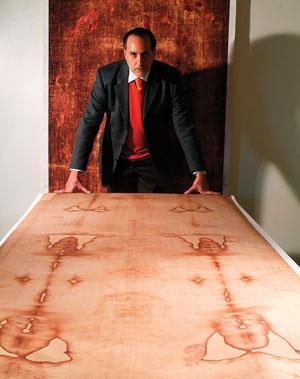 Giulio Fanti has performed Raman and IR spectroscopy on the shroud

Fanti says ‘[While] I obviously accept the carbon-14 method, I accept its results only if they are coherent with the hypotheses that are at the basis of the method. One of these is based on the assumption that the environmental factors in which the sample under analysis was conserved are known. This is not applicable to the Turin Shroud because it is not well defined how it was conserved during the first centuries.’

The problem with that argument is that no radiocarbon sample’s provenance is ever known. Indeed, it is the beauty of the technique that, to a large extent, it is independent of post-mortem contamination because the only parameter of interest is carbon-14 and, once incorporated into biological material, it is fixed. In the specific case of the Turin Shroud, the issue of post-mortem contamination has been examined and discounted.

Fanti’s alternative dating technique relies on a combination of Raman and infrared spectroscopy and mechanical textile breaking parameters to arrive at dates. Ramsey is cautious about Fanti’s technique. ‘Those aren’t methods that are used for dating in the archaeological community,’ he points out.

It is easy to see why Ramsey is so cautious. Most dating systems rely on some form of radioactive decay, be it radiocarbon for young samples, or argon–argon, uranium–lead, neodymium–samarium decays for geological samples. Other techniques, like electron spin resonance and thermoluminescence, exist to date archaeological samples. The point in all cases is that these systems have a solid theoretical underpinning and a long history of use, rigorous testing and cross-calibration behind them. Fanti’s technique is not only new, but seems to have been devised specifically to address the issue of the Turin Shroud. In short, the scientific cart seems to have been put in front of the methodological horse.

This argument seems circular: there is still no indication that the Shroud is even of 1st century age, let alone that it was anywhere near Gethsemane at the critical moment. ‘The injuries detectable on the Turin Shroud are coherent to those described in the Bible that were inflicted on Jesus during his passion and death,’ Fanti maintains. ‘For the moment, there is not a completely sure scientific proof that the Turin Shroud enveloped the body of Jesus Christ, but after more than 15 years of studies on this argument, I am personally sure that the Turin Shroud was the burial cloth of our saviour.’

Would Ramsey be in favour of dating the Shroud again, 25 years on? He picks his words with characteristic care. ‘Yes I think I would […] if you’re careful to think about all the different hypotheses and make sure that the tests were set up correctly. For example, the samples could be taken from a different part of the cloth [than was previously measured].’ He also points out that new techniques (such as laser ablation) would allow various layers of the linen fibres to be dated. ‘This would address the biofilm hypothesis in detail.’ Ramsey also suggests that advances in chromatography AMS would allow specific chemical fractions of the material to be measured, vastly refining the original dates.

Ramsey is responsive to reasoned criticisms of the dating of the Shroud, which is why he is open to the idea of resampling. ‘I don’t think it’s very healthy for people to go around in circles wishing various things to be true. I think that damages science. So, I would quite like to see [the date] either corroborated or not; that’s a very useful thing to know 25 years after the original dating.’

Richard Corfield is a science writer based near Oxford, UK