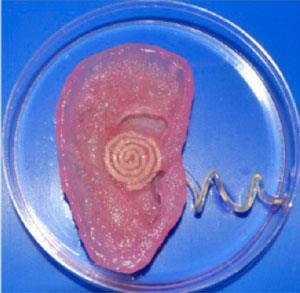 Engineers in the US have created a bionic ear that can be manufactured using a 3D printer. The device is the first to use 3D printing to interweave electronics and biological tissue, the researchers claim, and will pave the way for other bionic implants.

Although bionic organs, and cybernetics in general, have become a hot research topic in recent years, devices are still primitive. Scientists can implant electronics into or on top of tissue to help patients restore some loss of function, but entire synthetic organs are difficult to manufacture. One method is to seed cells onto a gel scaffold, and culture them until they form a tissue in the scaffold’s shape. But such tissues are rarely as structurally complex as the real thing.

An alternative route is 3D printing. This technique allows three-dimensional objects to be manufactured layer-by-layer using biological cells as the ‘ink’, and has already been used to create replacement knee and spine components. Now, however, a group led by Michael McAlpine at Princeton University, US, has gone one step further by printing electronics as an integral part of a biological tissue. ‘Our approach creates an organ which has both electronic and biological functionality at once, in a manner where we can’t tell where the electronics begins and biology ends,’ says Manu Sebastian Mannoor, a graduate student in McAlpine’s group.

The process is simple in principle. The researchers send a three-dimensional blueprint of their bionic ear to a 3D printer, which contains three different inks: silicone infused with silver nanoparticles for the electronics; silicone alone for structural support; and chondrocyte cells, responsible for producing cartilage, in a gel. Once the researchers printed the ear, they incubated it in a culture medium to allow the cartilage to form and fuse together. The result is a perfectly ordinary looking ear – albeit with no skin – complete with a spiral coil antenna that mimics the inner ear’s cochlear structure.

Bionic ears, or cochlear implants, are already available and the electronic function of this latest design is very similar. The crucial advance, therefore, is the ‘seamless integration of the electronics with the tissue,’ says Mannoor. To be transplanted the bionic ear would need to be covered with skin, he adds, and the challenge will be to integrate this with the 3D printing process ‘so that the entire ear in its final form – sort of – could come right out of the printer.’

Jennifer Lewis, a materials scientist at Harvard University, US, says: ‘There have been prior demonstrations of each of the sub-components of their work … [but] to my knowledge, this research team is the first to combine these into an integrated bionic construct,’ she says. ‘Their work represents a first step towards creating 3D tissue constructs with embedded electronics.’

Mannoor says that the group would like to try to make other bionic components, such as an eye or a nose. He adds that the research ‘opens up immense possibilities to create a wide range of bionic organs, or parts which possess enhanced functionalities over their ordinary biological counterparts.’