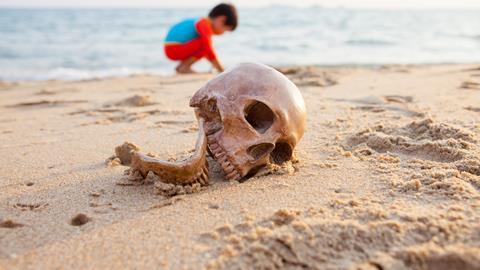 A dangerous guide to beachcombing

What not to touch at the seaside

The mid-19th century rise of oceanography as a scientific discipline is partly attributable to the Victorian craze for beachcombing – a trend that continues to this day. But the flotsam and jetsam that washed up on Victorian beaches were not freighted with the same chemical hazards that await today’s treasure hunters.

In August this year, a 41-year-old woman picked up an object from a beach on the banks of the Elbe, near Hamburg, Germany, mistaking it for amber. She put it in her jacket pocket, laid the jacket down… and her pocket combusted. The object was white phosphorus from a second world war incendiary bomb.

What is white phosphorus?

White phosphorus is an allotrope of phosphorus in a tetrahedral structure with size single P–P bonds. It’s a translucent, waxy solid that becomes yellow when exposed to light – which is why the beachcomber misidentified it. It’s nasty stuff, which self-ignites on contact with air, is highly corrosive, burns intensely and reacts with water (it needs to be extinguished with sand). Phosphorus oxidises at any temperature above 30°C, forming phosphorus pentoxide – as the video below demonstrates.

Today its use is banned as an incendiary weapon, although it is still widely used to create smoke screens.

Is this the first time someone had made this mistake?

No. There have been at least four cases of white phosphorus burns on beachcombers around the Baltic sea. All had confused white phosphorus ammunition residues with amber while walking on beaches at the Baltic Sea coast, sustaining serious burns after placing clots of phosphorus in their trouser pockets. The problem isn’t only limited to the Baltic. A 40-year-old woman sustained full-thickness burns from white phosphorus picked up on a Tel Aviv beach in Israel.

Has phosphorus ever been found in the UK?

Yes. In 1995 more than 4500 incendiary bombs – made of phosphorus, benzene and cellulose – washed up on beaches around Scotland’s west coast. They were part of an estimated million tons of munitions dumped between 1945 and 1976 by the Ministry of Defence in Beaufort’s Dyke, an underwater trench between Northern Ireland and Scotland. It was speculated that the munitions were disturbed by work on an undersea gas link between the two countries.

What other hazards are on UK beaches? 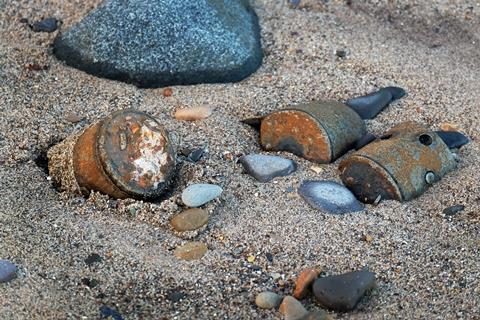 The inaugural issue of the Chemical Hazard and Poisons Reportby the Health Protection Agency described an incident which began on 20 January 2003, when beaches in the vicinity of Bridport, Dorset, yielded ‘large numbers of vials marked “Anthrax vaccine” [and] about 100 vials of brown liquid labelled Dimercaptopropanol [sic].’ The Chemical Incident Response Service advised that whereas the vaccine (expiry date 1999) would be harmless following skin contact, the 2,3-dimercaptopropanol (C3H8OS2) would be an irritant.

Also known as British Anti-Lewisite (BAL), it was developed in Britain during the second world war as an antidote for an arsenic-based chemical warfare agent, lewisite.However, although BAL is mainly used today as a chelating agent to treat metal poisoning – for example, arsenic, mercury, lead, antimony.

The HPA report, in a retrospective survey of major incidents involving packaged goods being lost overboard in British waters, noted that in February 1990 the freighter Fathulkhair lost six canisters of potassium cyanide (KCN), which washed ashore on Kent and Sussex beaches. KCN appears as white amorphous lumps or a crystalline mass; smells faintly of bitter almonds; and is toxic by skin absorption through open wounds or by ingestion.

Another problem is the rise of fatbergs.

According to a report in the Marine Pollution Bulletin, the 15 hazardous and noxious substances most often transported in bulk through European waters include palm and other vegetable oils, animal fat, methanol, benzene and its mixtures, sodium hydroxide solution, ammonia and sulphuric acid.

Palm oil residues may be washed from ships’ cargo tanks. Unfortunately, fats are hydrophobic, so tend to form together and wash up on beaches. While not as dangerous as old munitions, they can be fatal if ingested by animals – making them a hazard for dog walkers.

How can I stay safe at the beach?

Don’t go around picking up strange objects. If you see something that you think might be dangerous, keep clear and inform the local authorities – usually the council or coastguard.

If you are collecting items, make sure you take suitable precautions. For example, amber hunters should collect and store their samples in a steel bucket filled with water or sand, which will prevent the sample from igniting.