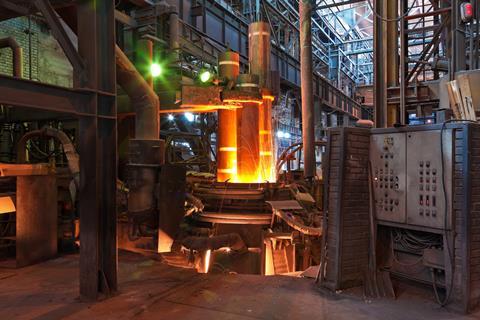 A previously unknown silicon–phosphorus anion discovered by US scientists could open the way to making organophosphorus compounds like glyphosate and flame retardants directly from phosphoric acid. This avoids having to make white phosphorus first, a pyrophoric and toxic form of the element that takes huge amounts of energy to produce.

Most phosphorus ore is made into phosphoric acid, the majority of which is turned into phosphate fertilisers. Just 2% of phosphorus rock is reduced to make around 1 million tonne of white phosphorus every year. This process is immensely energy intensive, however. White phosphorus is produced in an electric arc furnace and the ore is melted at 1500°C, generating carbon monoxide and carbon dioxide as by-products.

White phosphorus is then oxidised to phosphorus trichloride with elemental chlorine and transformed into compounds such as pesticides, flame retardants and the battery electrolyte hexafluorophosphate, many of which don’t contain any chlorine. ‘It’s a bit of a waste, you stick chlorine on and in the next stage you strip it off again,’ says Willem Schipper, owner of a consultancy in the Netherlands that specialises in phosphorus chemicals, who wasn’t involved in the study. ‘Also, the large amount of energy you’ve invested to make [white phosphorus] is released again, and lost, upon further processing.’

Christopher Cummins, from the Massachusetts Institute of Technology, and his graduate student Michael Geeson have now discovered a silylphosphide that offers a route between phosphoric acid and organophosphorus chemicals. The bis(trichlorosilyl)phosphide anion is the key intermediate between phosphoric acid and organophosphines, hexafluorophosphate and phosphine gas in a reaction sequence that neither requires white phosphorus nor elemental chlorine. 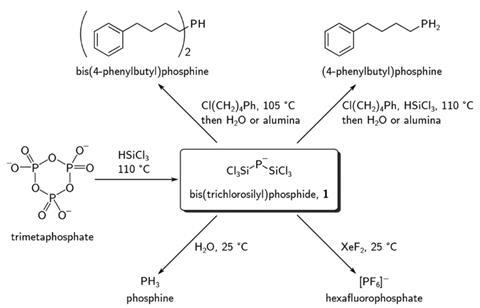 ‘To our knowledge, [the silylphosphide] has never been described before,’ says Cummins. ‘That was one of the really delightful things about this work.’ To access it, the team reacted trimetaphosphate – dehydrated phosphoric acid – with trichlorosilane, a common chemical in the semiconductor industry.

The intermediate’s phosphorus–silicon bonds can then be converted into phosphorus–hydrogen, phosphorus–fluorine or phosphorus–carbon bonds. In some cases, the researchers didn’t even need to isolate the silylphosphide. ‘That was one of the really remarkable things to see that it’s possible to go from [trimetaphosphate] to a [primary] organophosphine all in one procedure,’ Cummins enthuses.

‘It’s a very nice piece of chemistry that avoids the use of [white phosphorus], which is spectacular,’ says Schipper. ‘However, it does use a trichlorosilane, a compound made through elemental silicon, which, as it happens, is made in a very similar process to phosphorus with almost the same energy use. The element is lost in the process, probably ending up as silicates.’

The ideal reaction, says Schipper, would transform the phosphorus–oxygen bonds in phosphate directly to phosphorus–carbon bonds, without having to invest in attaching another element only to remove it again at the next stage.

If Cummins’ reactions could be adapted to industrial scale, it could relieve the current bottleneck around white phosphorus, which the EU added to its list of critical materials in 2017. Cummins and Geeson now hope to test their procedure on larger scale at a pilot plant in Morocco, a country with a thriving phosphate industry due to its vast phosphate rock reserves.