A light in shining armour

A technique normally used to study solar cells has helped conservators discover how a 16th century gauntlet was crafted. The work, which is yet to be published, offers insight into how blacksmiths achieved a black-blue effect, or ‘blueing’, in finished products by tempering steel. 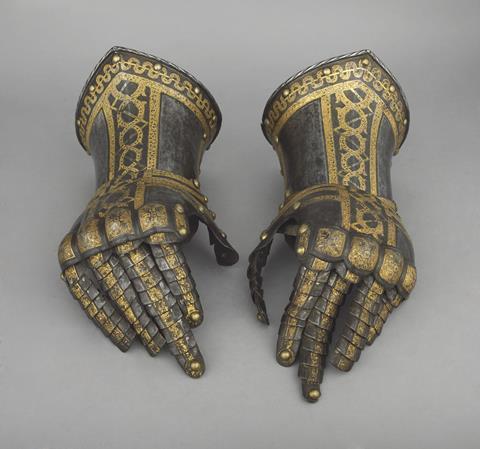 Source: Trustees of the Wallace Collection

The dark blue knight rises: the area of ‘blueing’ on one of the gauntlets was analysed to shed light on how the armour was made

Based on evidence in paintings and traces of blueing on historical armour, conservators suspect that a blued finish was common on much armour in the 15th-17th centuries, possibly for decorative purposes, and likely produced by controlled heating. But hardly any armour bearing its original finish has survived to the present day, largely due to heavy polishing by collectors or corrosion. What’s more, armourers’ methods were often trade secrets, so little is known about how blueing was produced.

However, conservators at the Wallace Collection in London, UK, recently discovered a small area of blueing on a 16th century gauntlet from a suit of armour made for Lord Buckhurst in 1587 prior to the Spanish Armada’s attack on the English. To carry out further analysis, the conservators teamed up physicist Alex Mellor at Imperial College London, who worked with them on a 19th century Napoleonic sword last year.

Using spectroscopic ellipsometry (SE) Mellor gathered spectral data on the gauntlet’s blued area. The measurement involved reflecting a light beam from the surface back to the SE detector with pinpoint accuracy. But it wasn’t easy. The blueing area was about 5mm across and was hidden under the knuckle of the glove, making it hard to position the beam.

Mellor normally analyses solar cell coatings on glass slides which are lined up with the beam with an automated positioner. ‘We had to purpose build a rig – essentially a mechanically movable arm that wears the gauntlet,’ explains Mellor. ‘This then had to be painstakingly positioned so that the light beam hit just the right spot and reflected into the detector.’ 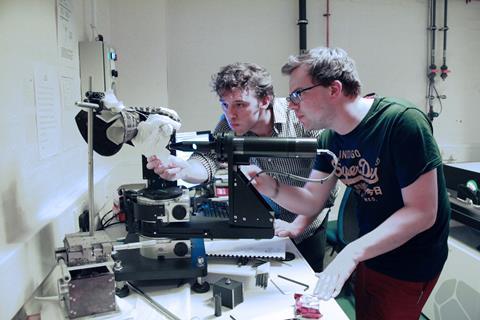 The resulting data – a reflected light signature of the blueing – enabled Mellor to determine the blueing’s composition. Referring to a 2006 study detailing what oxide layers are formed when steel is tempered under different conditions, Mellor mathematically modelled the light signatures these layers would produce. By comparing the gauntlet’s signature with these models he found a match with steel heated in an oxygen environment to 250°C, which produces a double oxide layer of hematite on magnetite.

Herman Terryn at Vrije Universiteit Brussel, Belgium, whose work Mellor referred to, says that this comparative approach is typical when studying ancient metals, although other analytic techniques are often employed because SE isn’t suited for obtaining data of rough surfaces. ‘It surprises me that they can use spectroscopic ellipsometry [on the gauntlet] because usually it only works well on very flat surfaces.’

‘When the Wallace Collection first brought the Napoleonic era sword, I looked at the surface and immediately assumed that we would not get any good data from it,’ Mellor explains. Rough surfaces depolarise the reflected light which produces inaccurate results, but SE also measures the degree of depolarisation. ‘On the sword and the gauntlet, despite the apparent roughness, the depolarisation was actually very small, and so we have reason to believe that the measurement is good, especially since the data fits a reasonable model,’ he adds.