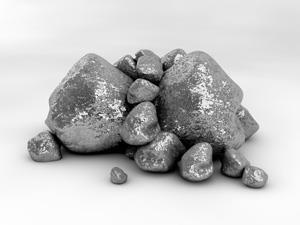 Platinum is one of the rarest metals in Earth's crust

Researchers from Denmark and Finland have challenged the belief that platinum is too rare and expensive for industrial hydrogen production by calculating exactly how little platinum can sustain the process.

Hydrogen is a serious alternative to fossil fuels. One way to generate hydrogen is through the hydrogen evolution reaction (HER) side of water splitting, which uses a catalyst such as platinum. Despite being incredibly effective in only tiny amounts, platinum’s rarity and cost limit hydrogen generation being scaled-up to an industrial level. Cheaper metals are less efficient at catalysing the HER, leading to similar concerns about cost and sustainability. Until a competitive alternative is found, it is important to know just how much platinum is needed for the HER should it be scaled up.

Now, Ib Chorkendorff, from the Technical University of Denmark, and colleagues have shown that 30% of the world’s annual production of platinum could generate 1 terawatt of power – approximately 6% of the annual global demand.

They combined an experimental photoelectrocatalytic reaction with a theoretical model to establish a relationship between the reaction’s efficiency and the platinum nanoparticle quantity. One of the most challenging aspects, comments Chorkendorff, was getting really accurate measurements, which involved ‘making well-defined mass-selected clusters under ultra-high vacuum conditions’. Previous attempts at measuring the exact amount of platinum were unsuccessful as ‘it was not possible to control the amount and the size of the nanoparticles as we could here’. The group accurately determined the amount of platinum by achieving a uniform dispersion of the nanoparticles on their electrodes.

Catalysis and energy conversion expert Jian Liu, from Northwestern University in the US, is impressed by how little platinum is actually required for hydrogen evolution. ‘The work ideally and virtually upgrades the laboratory’s work to a massive industrial scale, bridging the gap between the preconceived idea and the scientific reality,’ he says.

Until a viable alternative for platinum is found, Liu sees plenty of scope for optimising its use in this reaction. However, he warns that platinum’s durability still needs to be investigated further, as this ‘could pose a serious issue in scale-up for practical applications’.