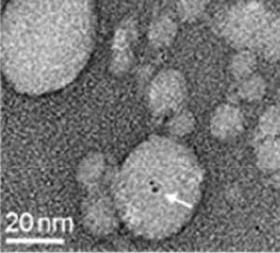 Gold nanoclusters can help to boost the efficacy and safety profile of hepatitis E vaccine (HEVA), according to scientists in China.

Hepatitis E, a viral infection which attacks the liver, is contracted by around 20 million people each year and results in 57,000 deaths annually. Although a vaccine has been available in China since 2011, it has yet to gain worldwide approval due to a lack of detailed safety data.

Now, a group of researchers, led by Guangjun Nie of the National Center for Nanoscience and Technology in Beijing, has found a way of delivering the vaccine using gold-nanoparticles, which could lead to safer and more effective protection from infection.

‘We found a simple method using a few gold atoms to link the vaccine protein together,’ explains Nie, ‘The bigger vaccine molecules not only trigger stronger immune responses for HEVA, but can also reduce the potential toxicity.’

By treating HEVA with chloroauric acid (HAuCl4), gold ions are adsorbed onto amino acid sites on the protein vaccine. The gold ions then cluster, bringing together multiple protein molecules to form aggregates. By exploiting the fluorescence proprieties of the gold clusters, the researchers can track the uptake of the vaccine, finding that the HEVA-gold aggregates appear to specifically target certain cell types.

Initial screening on mammalian immune and liver cells suggests that the aggregated vaccine is safer than the original HEVA vaccine. Tests on mice appear to show an improved therapeutic response when gold nanoparticles are used as adjuvants.

The findings raise the prospect of similar strategies being used to improve the effectiveness of other protein-based vaccines. ‘This bodes well for attempting the same approach with other immunotherapeutic targets.’ says Igor Medintz, a research biologist based at the U.S. Naval Research Laboratory who was not involved in the study. ‘There are many targets that have eluded vaccine development. I look forward to seeing what other immunotherapeutics and vaccines can be produced using the same strategy.’