A real red alert for explosives 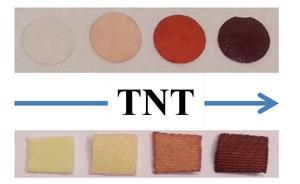 Scientists in Spain have developed a new material that changes colour around air- or waterborne TNT. The chemical, which could be used to make intelligent clothing, alerts users to the presence of the explosive. It may prove lifesaving in former war zones, and invaluable in anti-terrorism investigations.

TNT remains a problem in many war-torn countries where explosive weapons or landmines have been deployed, as it can contaminate water supplies and soil. The chemical is highly – sometimes fatally – toxic to the liver when consumed or absorbed through the skin. TNT can be detected using several lab-based analytical methods such as chromatography or mass spectrometry. However, these all require specialist equipment and skilled personnel.

The new polymer, created by José García and his team at the University of Burgos, changes colour when it detects TNT, providing a recognisable signal. This colour change is due to amine groups attached to the polymer, which react with TNT to make a type of complex called a Meisenheimer complex. These are characteristically highly coloured; in this case red, a sharp contrast to the original white polymer.

The polymer can be coated onto fibres to make clothing, or made into discs that can be carried around. The colour change occurs both when TNT is dissolved in water, for example in contaminated water supplies, and when it is in vapour form – such as when there are concealed explosives nearby, although the second situation currently gives a less obvious colour change. In solution, a visible colour change was observed at a TNT concentration of 1 × 10-4 M. Because no other equipment or knowledge is needed for the sensor to work, it can be used by non-scientists, such as civilians living near war zones, or homeland security police.

Ramón Martínez-Máñez, an expert in materials chemistry at the Polytechnical University of Valencia in Spain, thinks the idea is ‘highly appealing’ due to its simplicity: ‘This is a nice example of how to combine basic science and materials chemistry for a timely application.’

García, who says that his team’s main interest is in sensors that can help human welfare, is hoping to design a membrane–smart fabric system that concentrates the explosive vapour to improve the sensor’s sensitivity.