A team of researchers from Germany and Greece have synthesised a hexasubstituted benzene that has the largest dipole ever recorded in a neutral molecule. 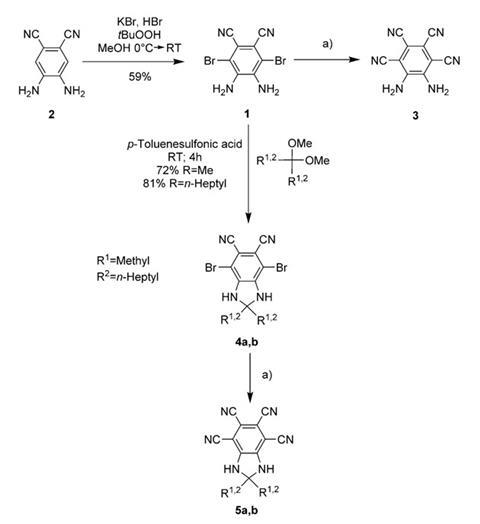 All compounds the team examined had dipoles above 10 debye

Other researchers have previously attempted to create highly polar compounds by attaching several electron-withdrawing and electron-donating groups onto opposite sides of a benzene ring. However, synthesising sterically crowded multi-substituted benzenes is difficult as standard electrophilic substitutions often fail.

The team used an unusual but effective oxidative bromination and palladium-catalysed cyanation to synthesise 5,6-diaminobenzene-1,2,3,4-tetracarbonitrile (3 in image above). This hexasubstituted benzene has a dipole moment of 14.1 debye, which is comparable with ionic species such as potassium bromide at 10.5 debye.

The team hopes that their compound’s record-breaking dipole moment might help to make solar cell semiconductors more efficient. Compounds with large dipoles also have potential applications in optoelectronics as they interact with and can alter the light’s electric field.