The algorithm tests whether two given MOFs can interpenetrate each other

Scientists normally want to stop their metal–organic frameworks (MOFs) from interpenetrating. But after realising the drawbacks of these entangled structures could actually be benefits they now want to find ones that definitely will.

It’s hard to mention MOFs without mentioning their pores. These pores and the potential created by their massive surface area have had scientists daydreaming about their possible applications for years. But these pores can easily clog up with sub-lattices, rendering them useless. Or so they thought. Interpenetrated MOFs are very strong and they can still have pores – with a much more specific size, which could be quite handy. 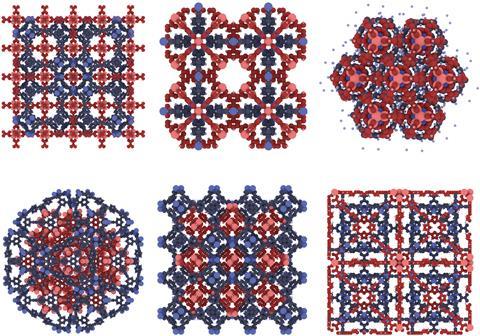 Serendipity was the previous route to interpenetrated MOFs. Now, Christopher Wilmer and colleagues at the University of Pittsburgh, US, have designed an algorithm that will quickly test if two crystal structures have the potential to interpenetrate with one another based on simple energetic calculations. The team used their algorithm to cross-screen a database of over 6000 frameworks – equivalent to 4.3 million pairs. It gave 1045 non-identical crystal pairs with a high likelihood of interpenetrating that were then reduced to 18 after manual inspection – most discarded combinations arose from duplicate structures in the database.

The software is free to access online and the researchers encourage others to use it to find new interpenetrating structures.