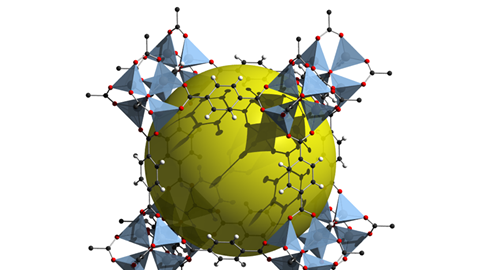 This week, Katrina Krämer looks at a versatile material that’s more hole than substance, and speaks to one of the pioneers in the field. 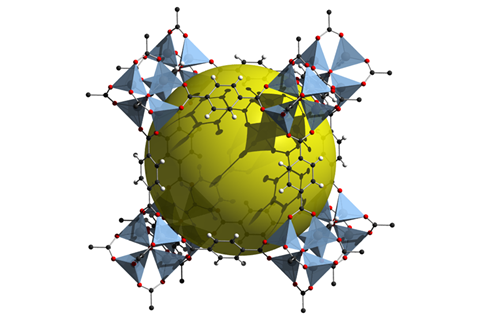 Example of MOF-5 with yellow sphere filling the pore

Chemists are usually interested in what’s there rather than what isn’t: it’s all about what atoms are connected in which way and how they interact with things like light, other atoms or even a biological system. But when it comes to porous materials, we’re less concerned about the atoms themselves and more about the spaces in-between.

Historically, when in need of an absorbent, porous material – for important things like breaking down petrochemicals, removing calcium from water or as cat litter – chemists went for zeolites. These aluminosiliate crystals, discovered in 1756, held the record for the most porous material for over one hundred years – until their record got well and truly smashed just before the end of the 20th century.

In 1999, researchers proved that a new wonder material called MOF-5, first made only a few years earlier, had more than three times the internal surface area of the most porous zeolite. If it were possible to unfold MOF-5, less than two grams of it would be enough to cover nearly all of the floor space in every one of the White House’s 132 rooms and 35 bathrooms – more than 5000 square metres.

MOF-5 was one of the first of a new class of coordination polymers, called metal organic frameworks: crystalline macromolecules comprised of metal ions or metal ion clusters (‘nodes’) connected by ‘struts’ made from organic molecules.

Omar Yaghi from the University of California Berkeley, a MOF pioneer who has been working with the porous compounds since the very beginning, thinks that what fascinates chemists about MOFs is that it allows them to control matter on a molecular level.

MOFs are a perfect example of how you can take molecules, organic and inorganic, stitch them together through strong bonds to make frameworks, and to be able to control not just the strength of these linkages, but also control the composition of the metal containing entity, which we call the secondary building unit, or SBU. These can be made from a variety of metals. Almost any transition metal in the periodic table could be used in these entities. And of course you have the organic, and the organic could be varied, not just in terms of it’s geometry and connectivity but also in terms of what functional groups one can place on these entities.

So it brought the idea of design to the forefront of solid state chemistry, and to chemistry in general.

Having captured chemists’ imagination, researchers would create more than 20,000 different frameworks over the next two decades. And with around 1000 research papers still being published every year, there seems to be no end to chemists’ love affair with MOFs. This is probably not a huge surprise, given that these holey materials promise great things: from storing hydrogen gas and stripping carbon dioxide from air to sensing chemical weapons and catalysing reactions.

Researchers have been touting the natural gas methane as the fuel of the future – cheaper than petrol and with significantly less potential for devastating environmental changes. The problem with natural gas is that it’s, well, a gas. Gases can be compressed or even liquefied if cooled down enough, but these processes are energy intensive, and a heavy, insulated cryotank doesn’t fit well into a car. MOFs could be the solution to this tricky problem – although counterintuitive on a first glance, a tank filled with a MOF could actually hold more gas than an empty tank, due to the material’s enormous surface area. This gives MOFs the ability to bring gas molecules closer to each other than they’d otherwise be at ambient pressure.

It’s not easy to store or compact methane in volumes that would be of the size of a fuel tank and still have the driving range that you need. So MOFs, there do very well. We can design MOFs that store two to three times the amount that you would store in a gas tank without the MOF.

This is a big development that we have been persuing jointly with BASF, and it’s poised for commercialisation.

Source: Boasap at the English language Wikipedia (GFDL or CC-BY-SA-3)

While some MOFs promise to solve our future fuel problems, others might be able to mop up past mistakes. Researchers have predicted that even if all of humanity stopped producing carbon dioxide tomorrow, the climate-changing potential of the greenhouse gas already in the atmosphere can only be stopped by capturing it. MOFs with custom-built holes proved to be so good at capturing carbon dioxide that the US Department of Energy has identified the material one of the most promising technologies – although it might be decades before any material becomes commercially available.

While MOFs might be able to solve some large scale problems, the small-scale lab chemist need not miss out on their share of the Swiss-cheese-like material’s suite of amazing abilities. Modifying the material’s interior and making metal atoms available to bind to host molecules could make MOFs the perfect catalyst for potentially thousands of reactions.

Slowly people are going back and modifying the interior so that the catalytic properties get better and better. I’m very excited about this application because for a long time there was a gulf between the selectivity that one gets with enzymes and molecules versus heterogeneous catalysts, let’s say metal oxide heterogeneous catalysts – they were very stable but not as selective and not as modifiable as one would get with molecules and enzymes. So we think MOFs can bridge this gap and not only provide stable catalysts under various pH conditions but also they can be modified so that they can have the selectivity of enzymes.

But first, chemists need to learn how to modify these macromolecular crystals. Instead of synthesising different building blocks and then putting them together into a MOF, researchers are now starting to alter frameworks after assembling them in a process known as post-synthetic modification. Eventually, a sequence of metal atoms and functional groups could be placed into the framework’s individual pores, passing a compound though a sequence of chemical transformations or encoding information like synthetic DNA strands.

So chemically modifying frameworks just like you would modify an organic molecule or an inorganic complex but now you’re doing it on a much, much larger scale. Almost a macroscopic scale – crystals of MOFs are macroscopic. So this gave rise to what I call ‘framework chemistry’. We’re used to the chemistry of molecules or molecular chemistry, but we are not used to thinking about molecules as extended frameworks, as macroscopic objects. And this is a big development, not just because of the precision that could be applied for functionalising frameworks, a precision that we as chemists use for molecular chemistry could now be applied to frameworks, but also now one can achieve many properties by design. So that’s going to evolve and lead to better and better

Although these types of MOFs are currently the stuff of chemical dreams, the holey frameworks have already proven that they’re a jack of all trades and master of many. It certainly doesn’t look like chemists will run out of ideas of what to make with MOFs any time soon.

Katrina Krämer there, speaking with Omar Yaghi about the potential of metal organic frameworks. Next week, Michael Freemantle discovers a family of compounds that delight and inspire.

Charlotte Brontë, for example, in her novel Jane Eyre, refers to ‘the congealed relics of autumn, russet leaves, swept by past winds in heaps, and now stiffened together.’ And Jane Austen writes in her novel Persuasion about: ‘the last smiles of the year upon the tawny leaves,’ and, ‘the thousand poetical descriptions extant of autumn.’

Join us next week to find out more. Until then get in touch through the usual routes, and join the discussion with the Chemistry World book club podcast – you’ll find that on our website or on iTunes. I’m Ben Valsler, thanks for joining me.