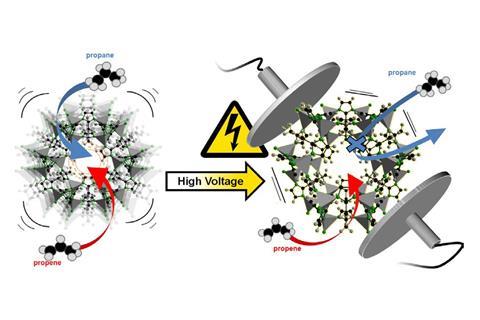 Zapping a porous crystal with electricity stops its molecular quivering and switches on its gas sieving ability, researchers from Germany have discovered.1

Metal-organic frameworks (MOFs) have been hailed as wonder materials – their pores and channels can store gases, detect water and even disable chemical weapons. Theoretically, engineering MOFs with particular pore sizes makes them ideal for separating gases. In practice, however, MOFs are too flexible for precise sieving. The crystals ‘breathe’ as their molecules wriggle around due to thermal energy, which leads to their pores constantly changing size. 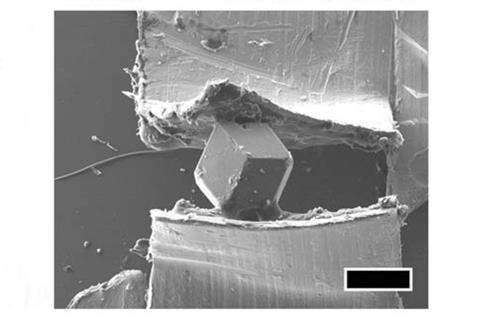 But Jürgen Caro, Alexander Knebel and their team from the University of Hannover discovered that simply applying an electric field stops this molecular breathing and boosts gas separation in the zinc-based imidazolate MOF ZIF-8. In a weak electric field the material’s stiffness increases dramatically from something close to rubber to even more rigid than glass. ‘This stiffening leads to the sharpened molecular sieving (at 3.6Å), as the [imidazolate] linker molecules can move less,’ explains Knebel. The stiffening is reversible, but it takes ZIF-8 a few hours to return to normal.

When electrically stiffened, ZIF-8’s ability to separate propane from propene increases by 33%. Although this doesn’t sound like that much it is difficult to do much better than this, Knebel says. The two gases differ in size by only 0.3Å and are usually separated by low temperature distillation. ‘When it comes to energy intensive separations, propane/propene is pretty high up,’ says Niveen Khashab from King Abdullah University of Science and Technology, Saudi Arabia, who was not involved in this work.

Özgür Yazaydin, from University College London, UK, is excited to see this idea put into practice – a phenomenon he and others had predicted computationally.2,3 ‘It is quite possible that there are other MOFs or similar materials, which can show more drastic changes in response to the presence of an electric field,’ he adds.

‘A switchable material has the possibility to be used in more than one application at the same time,’ says Knebel. ‘It’s important to think about materials as not just being static,’ Khashab agrees. ‘Those that respond to stimuli can give you a new profile just from one material,’ she says, adding that this electric stiffening is ‘a really smart approach’ that could be applied in targeted drug release.

Knebel says that a patent application has already been filed and the team is now working on new experiments and ideas.