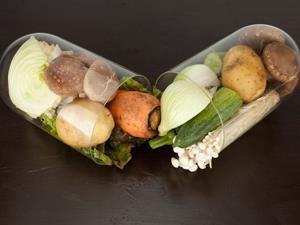 Manufacturers are keen to push more nutrients into processed foods, and nutraceuticals promise forgiveness for the sins of a bad diet – with iron and calcium in breakfast cereal, plant sterols in cookies, and vitamins in soda. That promise is predicted to drive a global market of nearly $263 billion by 2020, but a letter to Nature published earlier this year implicated some of the most widely used surfactant-based emulsifiers and encapsulation agents in promoting colitis and metabolic syndrome in mice.

‘There is concern that these materials, specifically carboxymethylcellulose and polysorbate-80, could be hazardous with long-term consumption,’ says Qingrong Huang, a professor of food science at Rutgers University, New Jersey, US.

Speaking on 18 August at the American Chemical Society’s (ACS) national meeting in Boston, US, Huang proposed an alternative approach for encapsulating and delivering nutraceuticals using particle-stabilised Pickering emulsions in place of the surfactant stabilised materials.

Pickering emulsions can be highly stable, resist coalescence and are relatively immune to thermal changes. They are also familiar to many food scientists. The challenge of combining oily and water-based materials, and getting them to stay together, is at the heart of food preparation. Calcium carbonate, fat crystals, and starch granules have all been proposed as alternatives to surfactant-stabilisation of oil/water interfaces to tailor texture, conceal calorie-reducing water in reduced fat food, and deliver nutraceuticals.

The stabilising colloidal particles for Huang’s Pickering emulsions are created using label-friendly proteins and polysaccharides, and they also offer the possibility of multi-cargo delivery.

‘Our approach can deliver water-soluble antioxidants such as Green tea polyphenols, oil-soluble phytochemicals, and inorganic minerals at the same time in one delivery system,’ Huang says. ‘The key is the creation of colloidal particles by the coacervation of protein fragments created from tryptic digestion of casein (milk protein) with chitosan polysaccharides.’

When negatively charged proteins are combined with positively charged chitosan polysaccharides, there are three possible results. They may be completely compatible, creating a homogenous solution, or they may be completely incompatible, creating a sticky lump of precipitate. The more interesting outcome, which is the basis of Huang’s technology, is associative phase separation to create coacervate particles – a liquid-liquid phase separation which has been referred to as a ‘different state of matter.’

The mechanism of this complex coacervation remains a subject of debate, and provides fertile testing ground for molecular models. Results suggest that the driving force is not the electrostatic interaction between positively and negatively charged biopolymers, but the entropic gain as bound water is released to bulk.

Huang’s colloidal stabilised emulsions provide an ideal environment for the encapsulation of flavours or nutraceuticals inside foods. Cryogenic transmission electron microscopy (Cryo-TEM) shows the coacervate particles poised at the interface between an oil droplet and the surrounding water, and the particle size is controlled by changing the pH during the coacervation process.

‘Digesting the casein produces phosphorylated peptides which can be used to carry inorganic supplements such as calcium and magnesium,’ Huang explains. ‘Water-soluble green tea polyphenols can be absorbed in the protein-chitosan coacervates, and oil-soluble materials are carried in the emulsion droplet.’

Importantly, the coacervate particle-stabilised emulsions may also increase the levels of the supplements that are actually absorbed in the gut.

After testing them on a cell line that mimics the intestine barrier, Huang said he and his colleagues saw evidence of ‘enhanced bioavailability and absorption of the nutraceutical payload’.

‘It’s a smart and flexible approach,’ says Sarah Perry, an assistant chemistry professor at the University of Massachusetts-Amherst. ‘Replacing the synthetic surfactant emulsifiers…with coacervate particles from naturally sourced materials would be popular with food companies and consumers.’