Life on earth may have begun millions of years earlier than previously thought, claim researchers who have measured the carbon isotopes of graphite preserved in a 4.1 billion-year-old mineral. 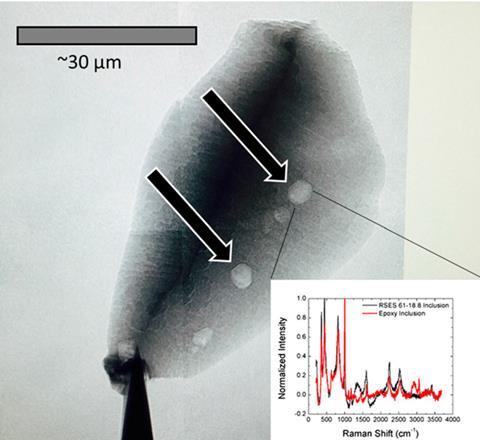 The stable isotope ratio of carbon is often used as an indicator of life in old rock samples. A high carbon-12 to carbon-13 ratio suggests the carbon has been processed by living organisms, because some metabolic enzymes involved in fixing inorganic carbon ‘prefer’ carbon-12. In this case, the carbon sample came from two microscopic specks of graphite embedded in a sliver of zircon, one of hundreds of zircons from the Jack Hills of Western Australia, which are thought to contain some of the oldest minerals on Earth.

After spotting the graphite inclusions, researchers at the University of California, Los Angeles in the US measured their isotopic make up using secondary ion mass spectrometry, shooting a beam of caesium ions onto the surface of the graphite. ‘We used the caesium ion beam to drill through the [zircon] surface and into the graphite, such that the graphite was never exposed to contaminants prior to analysis,’ says Elizabeth Bell, who was part of the team.

The team’s analysis showed that the carbon in the sample was enriched in carbon-12 by around 2%, compared with carbon in the Earth as a whole. ‘Since living organisms tend to concentrate carbon-12, this is a potential signature of life,’ Bell says. Given that the zircon sample is 4.1 billion years old, and the enclosed graphite even older, she adds, this could be evidence that life on Earth started hundreds of millions of years earlier than is currently thought. The observations could also offer new insights into what Earth was like during the Hadean eon, 4– 4.6 billion years ago.

‘Although the previous view of the Earth’s first few hundred million years … was that of a sterile, dry, hot planet under heavy meteorite bombardment, evidence from Hadean zircons has provided a new picture of a much more hospitable planet more like the Earth of today in many respects,’ says Bell.  ‘For instance, the zircons’ low crystallisation temperatures and enrichment in oxygen-18 suggest the presence of liquid water.’

‘If it turns out that the carbon indeed comes from microorganisms, this would push back the record of life by 300 million years,’ says geomicrobiologist Andreas Kappler from Tübingen University in Germany, who was not involved in the study. ‘However, it also has to be kept in mind that they found these inclusions only in one out of 565 zircons and – as the authors also acknowledge – abiotic processes can lead to a similar isotope fractionation.’

It is true that there are processes that don’t involve living organisms that could lead to a similar isotope ratio being observed, Bell explains. But she also points out that any mechanism for concentrating this carbon in graphite form and trapping it in a zircon with the geochemical characteristics of this particular sample would be incredibly complicated, perhaps unfeasibly so.

The best way to settle the debate will be to find and measure more samples of carbon in other ancient rocks, Bell says. ‘With, for instance, 1000 samples spanning 3.8 to 4.4Ga [billion years old], we could start to see patterns in the data to make a much more solid case for Hadean life and to constrain the Hadean carbon cycle in general.

‘Zircons older than 3.8Ga make up around 5% of the Jack Hills zircon population, so there is plenty of material to continue the search.’