How could primitive life have functioned before today’s interdependent system of DNA and proteins? The RNA world hypothesis offers one explanation to this chicken and egg problem. Now scientists have reinforced that theory by showing how short, prebiotically plausible RNA fragments can form a functioning ribozyme at the cooler temperatures of early Earth. 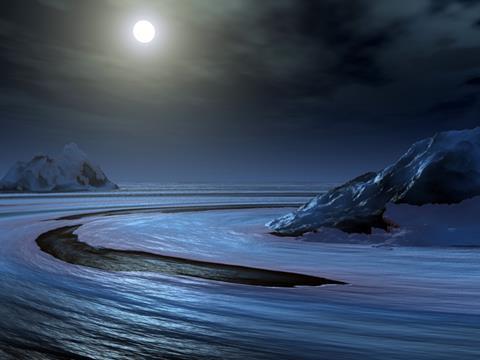 ‘It is challenging to investigate the RNA world hypothesis because the organisms died out more than 3.4 billion years ago, so we cannot directly study them,’ says Ulrich Müller from the University of California, US, who led the work.

The RNA world hypothesis describes a time when catalytic RNA molecules, also known as ribozymes, mediated the replication of prebiotic organisms. On primitive Earth, RNA was both the genome and the genome encoded catalyst, rather than DNA and proteins. Molecular fossils help confirm this hypothesis. The most important of those fossils is the ribosome; a molecular machine in all living cells today that catalyses protein synthesis and indicates that ribozymes were present before genome encoded proteins.

Most existing ribozymes are much longer than what scientists would expect to have originated on prebiotic Earth, however Müller and his team reduced the size of a triphosphorylation ribozyme and fragmented it into three strands: 34, 14, and 19 nucleotides long. The strands can assemble and start functioning as ribozymes. ‘At around 50Å in diameter, the ribozyme is slightly smaller than tRNAs and much smaller than a prokaryotic ribosome [approximately 200Å],’ adds Müller. Gerald Joyce, an expert in the directed evolution of RNA enzymes at the Scripps Research Institute, US, says: ‘It is not difficult to imagine oligos of this size being present on the early Earth and conspiring in a similar fashion to bring about the functions of an early biochemistry.’

The length and synthesis of prebiotic RNA polymers is unclear, especially with no genome-encoded catalysts around, but forming ribozymes from short RNA fragments is much more likely than from long RNA molecules.

The Earth was much cooler when life originated as the sun was around 25% dimmer than today. ‘We find that the optimum temperature for the fragmented triphosphorylation ribozyme [15–20°C] is lower than the non-fragmented ribozyme [40°C], suggesting that lower temperatures might stabilise ribozymes generated from short RNA fragments,’ says Müller.

This ribozyme also catalyses a triphosphorylation reaction between RNA and a prebiotically plausible inorganic phosphate, called trimetaphosphate, that could have served as an energy source for RNA world organisms. Trimetaphosphate attaches to the 5’ end of an activated RNA molecule as triphosphate, an important step for creating energetically active ribozymes. ‘This reaction provides a parallel between the RNA world and the metabolic world – which is dependent on ATP [adenosine triphosphate],’ says Niles Lehman, who studies the origin of life at Portland State University, US. ‘In some way this is equivalent to a primordial ATP synthase – a protein enzyme that makes ATP today.’